Blee was telling me today about a friend of hers, who she grew up with, who’s founded a company called – Splashpower. Basically, her product is a unit called Splashpad, a mouse pad-sized unit you put different portable devices on such as cell phones, cameras, etc., to get charged therefore eliminating the need for the multitude of chargers we all seem to collect. Brilliant concept. Will undoubtedly make millions and millions. Wah Wah Wah. Good on Lily!

So Carolyn Bennett, MP and Minister of State (for another week at least) finally fulfilled her fascination with me at the corner of St Clair and Yonge this morning. And this time I remembered my camera! I told her I’d email her the picture. She looked confused at that point. Hmmmm, maybe she hasn’t been stalking me all these weeks?! Hehehe Of course, she’s not been doing that, just always seems to be where I am! 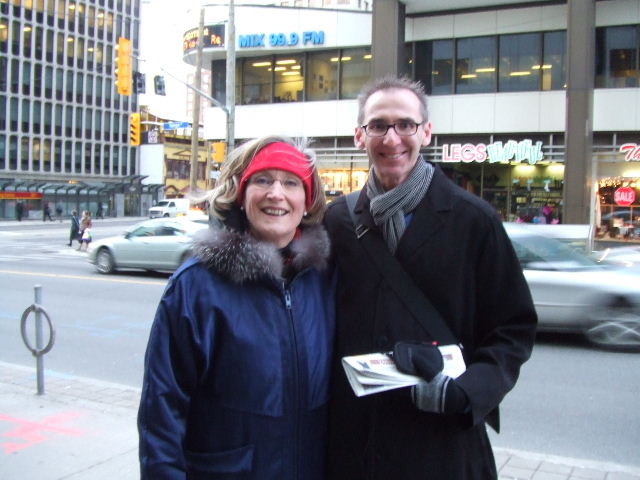 I did my civic duty yesterday and voted. Voting always makes me proud to be Canadian, and thankful we live in a democracy.  The woman ahead of me at the polling station was behind the screen for, oh, must have been 3 minutes. I’m standing and waiting and waiting and thinking, heavens, how hard is it to put an X beside one of the four names listed?! Then I (and the poll official) realize she is a new Canadian and this is likely the first time ever she’s had the opportunity to vote. How wonderful; how intimidating. The poll official then then went over and kindly read the names of the candidates for her.

G then told me at supper about his grandparents experience voting as well and how they always have to study the name of the candidate they are going to vote for prior to election day. English is also not their first language and while they can speak some, writing and reading it versus Chinese is quite difficult. So they study the name in english so they can recognize it on the ballot on election day.  Since immigrating to Canada, they have never missed a vote. It is that important to them. It should be that important to us all!

So, next Monday, get out and vote! Have your say; make your mark. Keep democracy alive!

He’s so cute. First, not only does he spend 10 minutes showering only to get out, dry off, visit me in the kitchen then remember he’s forgotten to wash his hair. Then proceeds to nick himself shaving and blames the black cat that ran in front of the car (and which, kind-hearted lad he is, he braked to avoid running over).

Next time you’re in the Yonge/Eglinton area, stop by the Starbucks on the south side of Eglinton, just east of Yonge. There’s a girl there working the afternoon shift who is the spitting image of Fitz off Coronation Street. Corrie Street, you’re thinking? Yes, I know but remember I’m British so it’s a gene thing.