How I Ended Up Twisting with Chubby Checker

Posted on February 21, 2006 by appsscraps
Keeping with the run-ins with not-so-famous folks theme … today’s installment is about my adventure with Chubby Checker. Who’s Chubby Checker you ask? He’s the guy who invented a famous dance – The Twist – and sang about it.

Flashback to 1987: my papa is being honoured by ACA with its highest award, the H.R. Cass Correctional Achievement Award, Yay Papa! Papa used to wander in very interesting circles back then and spent time capturing bad guys. ANYhow, Papa’s being honoured and we all fly off to Cincinnati for the Congress and Awards Banquet. ACA has brought in Chubby Checker and Little Anthony and the Imperials for the post-induction ceremonies’ entertainment.
So we have this swank dinner with 1000s of other bad guy-catchers. We’re at a big table of honour: me; Papa; my mom; my sister and her 1st (or it may have been her 2nd husband?); the Governor of Alaska’s beside me and he’s really funny telling jokes all through dinner; the Minister of Justice is beside Papa but he looks dour and sleepy to me; his wife is charming and chats away to my mom about the hotel and Nashville and how great a job Papa did organizing the ACA’s Toronto’s Congress. It’s fun and cool and I get to eat all I want. After supper, Papa’s inducted (or whatever you call it), and there’s speeches (but they’re boring as sin). Papa’s was fab but it was like 20 years ago and I can’t remember much about it save he praised my mom for standing beside him; he introduced us (and we got to stand up … woohoo us!); and thanked all sorts of other folks I knew the names of but couldn’t put faces to. Think Oscar speech but way longer!
The plates are cleared and the attendees – now all sufficiently liquored up – are ready to party. Out comes Little Anthony and his Imperials and instantly everyone is up dancing and crowding around the stage in the banquet hall. The music is fun – old folks music from the 50s and 60s and I’m hip to that. The President of the ACA comes over and asks Papa if ‘the kids’ want to join Chubby Checker on stage when he does his gig.

Course I remember the Twist cause it’s played at every wedding I’ve ever attended. And the chance to twist live on stage with the guy that’s invented it is like way cool.

Chubby’s been sufficiently prompted as he actually calls us up on stage. First my sister then me. And twist-a-go-go I go! With da man himself. It’s a riot and he gives me a huge (and very sweaty!) hug afterward, and tells me “You should be proud of your Papa”, which of course I am. Chubby’s brilliant and does a version of The Twist that goes on like 15 minutes. And he does that twice!  Talk about working a dead horse.
That night, I stumble back to our room, drunk. Eek!  But Papa and my mom get to head upstairs afterwards and chill with Chubby and Little Anthony in their suites. Damn, lucky buggers.

And you know, all the twisting in the world won’t cure a hangover!

… the next installment in this series will be: How I Found Myself in a Renault Le Car on the Beach in St. Malo Surrounded by Water with Two Kindergarten Teachers and Colin Hay from Men At Work.

Tuesday’s swift move of the day: when south is north
Gosh, I was soooo sleepy this morning (not to mention lazy) I got on the wrong subway train. Breaking a routine can be hazardous. I invariably walk through the Eglinton Station and take the farthest escalator (by the new “Used Book Sale Co.” store) down to the tracks, turn right at the bottom and climb on a southbound train. This morning I broke this routine and took the escalator by the Second Cup, turned right and climbed on a northbound train. But turning right at the bottom of the Second Cup escalator puts you on a train to Lawrence not Davisville. It’s only as I hear the announcement that I realize, oops, “You’re going the wrong way” (remember that line from a famous movie?). Lesson learned: stick to routines!

And on the Used Book Sale Company store angle…. have you noticed these stores popping up here and there of late? The one in Eglinton Station is about 3 weeks old and today at lunch I found this one right on Yonge Str just north of St Clair. This used to be a fantastic cookware store with great deals but it sadly went under. So, instead, at lunch I’ll be wandering here buying cookbooks! 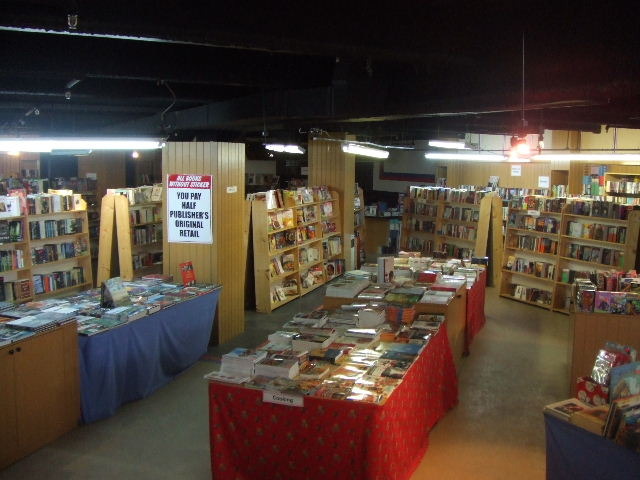 Giant Book Sale Co. at Yonge/St. Clair
Tuesday’s food: The Keg
Tennis Star Suzie and I commuted out to the wilds of Scarberia this evening for dinner to celebrate Mama Joan’s seventy-beep birthday! Mama Joan was our supervisor many moons ago and we continue to chill together. As a boss, Mama Joan was unceasingly demanding; tough as leather; eccentric as Willie Wonky (you should have seen her office … omg! … utter chaos); totally client-centered; to some utterly terrifying; and probably one of the best supervisors I’ve ever been fortunate to work with (note, I did say with not ‘for’). I learned a lot from Mama Joan. She was hard on you, but if you were good at what you did (and I was)(not to mention humble as you can see), she utterly respected you and let you do your job. 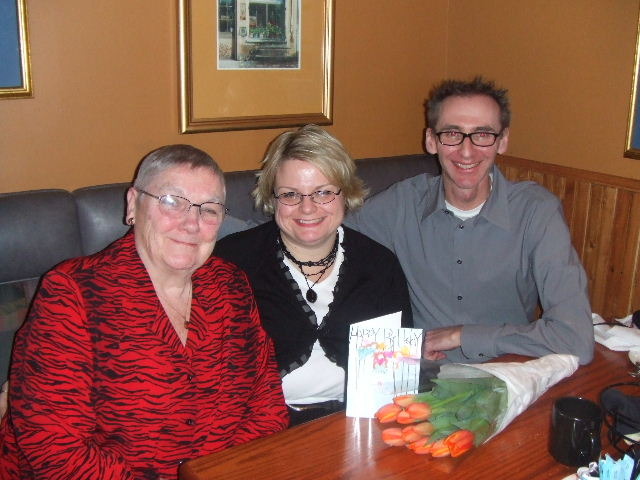 Mama Joan, Tennis Star Suzie and me
The Keg in Scarberia is like nearing 15 or 16 years old now. Way out at Markham Road. It’s like forever away. I do not know how people live in the suburbs. OMG, I’d die. ANYway, the food was fine for Keg fare: meaning (yawn) regular food at over-inflated prices. Gosh I dislike franchise food establishments. 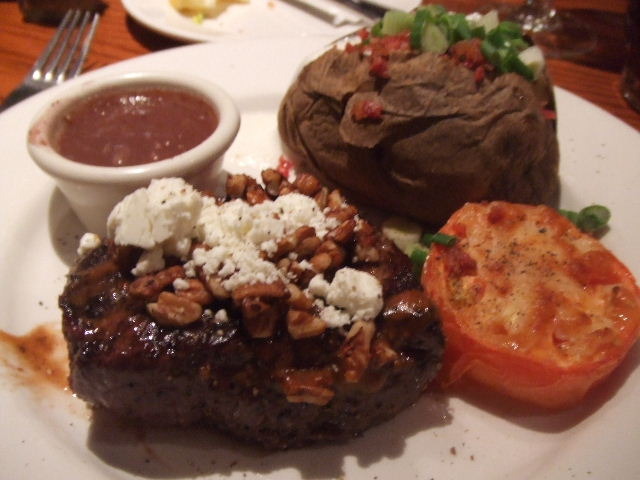 Dinner: sirloin with walnuts/goat cheese and a baked potato with the works

10 Responses to How I Ended Up Twisting with Chubby Checker