Grow Your Own Boyfriend

Last week, G and I met up with Scots on the Rocks Annie to finally give her the xmas gift we bought back in, like, September. It was 6 funky Caban plates. We topped the gift off with this: 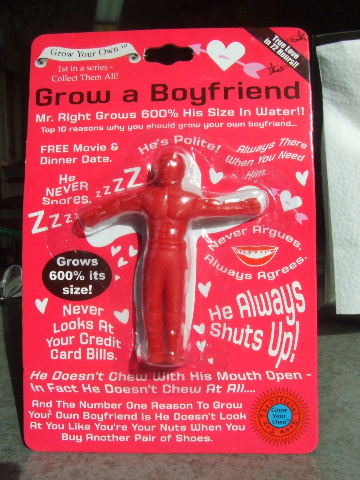 …. A Grow Your Own Boyfriend kit which we bought on Granville Island in Vancouver in early December. Just a a bit of background here. Scots on the Rocks Annie was married for many years and recently divorced. So, she’s been out of the dating scene for some years. G and I jokingly had been giving her lessons on how to pick up men (okay, no comments please on the fact two gay guys are giving a straight girl lessons on picking up men):

Lesson 1: Scanning
Scanning is a key skill to acquire. It allows you to survey possible targets and most importantly, can offer an opportunity for a brief smile or lingering eye contact. Scanning opportunities also afford you the chance to ‘see and be seen’. Anytime you’re in public you should be scanning. As G and I have a Mirvish Theatre subscription, we often take Scots on the Rocks Annie and during intermission have her practice her scanning. Strategic placement is key: best bet on stairs higher than the crowd, or at the Canon Theatre up on the balcony. Look good: head up, shoulders back, and key: chest out! Also paramount in scanning is noticing who the target is interacting with and whether or not a ring is present.

Lesson 2: “Bend and Snap”
Anyone remember which movie this is from?! …. Key here is to engineer an opportunity where you need to bend over and pick something up while in close proximity to your target. Bend over, grab the whatever-it-is, then rise and SNAP! that chest out in front of your target.

Lesson 3: the Pick-Up
Scots on the Rocks Annie had been expressing some interest in a particular waiter at Glass lounge in the Royal Ontario Museum. It’s a funky space that is hopping on Friday nights (though I’m not sure if it’s open with the renovation now underway?!). So, we took Scots on the Rocks for drinks and strategically placed ourselves so the target waiter would serve us. There was much interaction (Annie did a real real good job) but sadly our target was either 1) not interested, 2) gay, or 3) dense, so no hook-up ensued.

Scots on the Rocks Annie moved east back in November and is still single so either we’re not good instructors, or Annie is a slow learner!

Regardless, she can now – at least – grow herself a boyfriend.

Get over it! Okay, done. I’m off to debone a whole rabbit I bought this afternoon at the St. Lawrence Market.

3 Responses to Grow Your Own Boyfriend