It Ain’t Over Till the Fat Lady Sings…

First off, June Anderson, the diva of our opera is not fat. She is beautiful; gorgeous even and the true epitome of a “Norma”. Now, I know I said I’d not prattle on about Norma anymore … but … well, it’s my xanga and I lied so though. This will be the last time, honest. 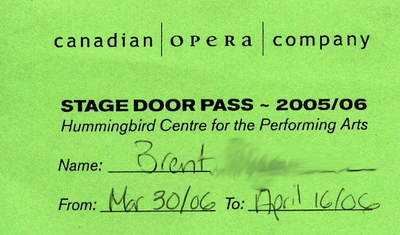 Stage Door Pass no more
My stage door pass for the Hummingbird is no more. I’m thinking I should ebay it because it’s the last time the Canadian Opera Company will ever perform there. I’m banking on some over zealous old wrinkly starting a bidding war for it. Whatcha think?! ….

Some other interesting opera-related things:

Right that is all for now as we’re off to the Canon Theatre tonight to see Cirque Eloise’s Nomad. Review tomorrow.