Posted on May 30, 2006 by appsscraps
EEEKKK!!!!  … so, there we were
on Catalina Island the Saturday night before the Madonna concert with NO Madonna
tickets. And secluded at Zane Grey’s we had no phone to call ticketmaster
or computer to try solving our dilemma online. Regardless, it was 10pm so doing
anything wasn’t in the offing. So, to a sleepless rest we
went.
How did it happen? … I checked the tickets twice
before leaving. However, I only opened the envelope and saw the ‘Ticketmaster’
writing on the stub and thought, “good, got ’em” rather than take the time to
actually pull the bloody ticket right out to ensure it was the Madonna (not
FashionCares) tickets. Lesson
learned.
Sunday morning first thing I rang Papa in London and
asked him to log on to G’s account to retrieve our confirmation number and etc.
With that in hand we headed back to Los Angeles on the ferry. We headed straight
to our hotel – The Belamar Hotel in Manhattan Beach – and rang Ticketmaster.
Thankfully, this sort of thing happens frequently and all we had to do was head
down to the Forum, show photo ID and the credit card we used to purchase the
tickets, and voila, we had a 2nd set. THANK
GAWD! 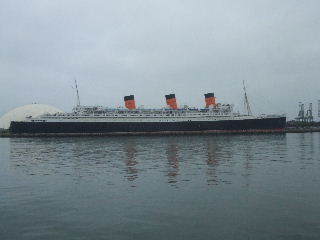 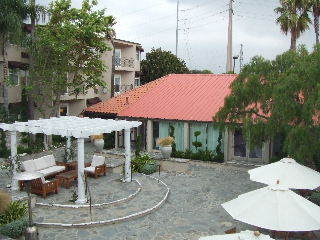 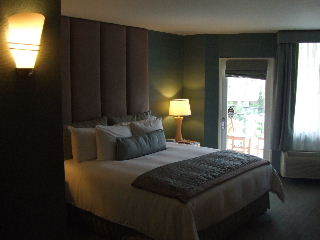 1)The Queen Mary as we head into Long Beach; 2) our view at The Belamar; 3) our room at the Belamar

Check-in: 4 – quick and painless (and they graciously
allowed me to make a long distance call to Ticketmaster and use their computer
so eprops for
that)
View: 3 – large comfy king bed and nicely decorated
but noisy air conditioner with a balcony door that did not lock (try as I
might).
Value: 4- Great value for Los Angeles (especially on a night when every hotel room was booked in the city)
Uniqueness: 2 – dubbed a ’boutique hotel’ but promised
boutique hotel offerings did not materialize: no turndown service; no
complementary Los Angeles Times at our door on Sunday morning; no free take-home
CD in our room’s CD player. 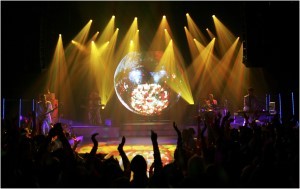 Well,
what can I say? Outstanding, rapturous, a
spectacle,
brilliant!!

We
arrived at 5pm and parked before crossing the picket line (the concession staff
were on strike!) to “Sizzlers” for dinner. Good dinner despite sitting at the
window with an actual bullet hole in it (ah, dining in Los Angeles). We got into
the Forum around 7:30 and found our seats which were great – in the Colonnade,
section 9, 2nd row from the front.

The
stage had one lone catwalk reaching to what would be center ice (if it was a
hockey arena) with two smaller side stages. In all there were 4 video screens: a
massive semi-circular screen that raised and lowered in front of the band, one
centre stage [behind and above this semi-circular one] and one to either side
above the two smaller
catwalks.
The
show started late at 8:45 pm and Madonna strutted and sung and danced
continuously till 10:45 when she closed with “Hung Up”. There was no opening
act; no
encore.
There
were 4 sets which I’d theme as: Equestrian; Religious/Political; Rocker Chick
and Disco. She opened with “Future Lovers”, descending to the end of the center
stage catwalk in a massive disco ball that opened into a orchid. As you can
imagine, that set the crowd into hysterics!  She opened the second set with
“Live to Tell” and yes, she was up on a sequined crucifix. I thought she was in
brilliant voice (far better than how you heard her at the European MTV Awards in
Barcelona or the Grammies. For me, the best set, hands down was the Rocker Chick
bit … she opened this with rocker version of “I Love New York” which was
freaking fantastic! Seeing her play this song was worth the price of admission
alone, I
thought!
She
clearly – like most pop stars today – highlights a couple messages in the show:
namely the plight of children in Malawi; the horrors of abuse; and her dislike
of most politicians and governments [especially George Bush and Dick Cheney: she
does a great job dishing both with visuals on the video screens]. We also saw Rosie O’Donnell front row centre (her big head could be seen anywhere in the Forum, I’m sure. Also joining us that night on the star side was Salma Hayek, Nicole Ritchie, and Red Hot Chili Peppers’ Anthony Kiedis.
When
“Hung Up” ends and Madonna disappears into the centre stage catwalk trapdoor,
the huge semi circular video screen asks: “Have You Confessed?”

Yes,
I confess Madonna: I loved your show! In my listing of Top Concerts of All Time,
I’ll place you
second!
While
in Los Angeles we also toured Santa Monica, Beverly Hills, Bel Air, did a
drive past OJ Simpson’s former residence on Rockingham he he he. Now rebuilt and
renumbered to keep folks like G and I from finding it. We also visited G’s old
school haunts at Bergamot Station, now a mix of very highend and funky art galleries. We
headed downtown to Canadian architect, Frank Gehry’s, beautiful Walt Disney
Concert Hall. Frank is currently doing the renovation at the Art Gallery of
Ontario fyi. And, of course, we ate at the world famous “Norms” for greasy grub. 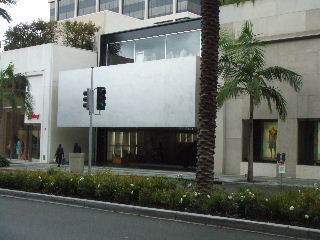 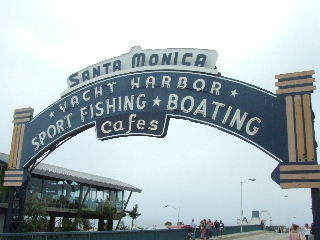 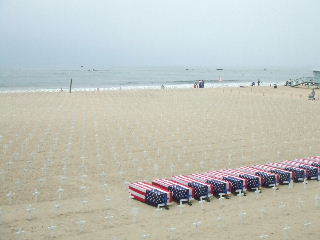 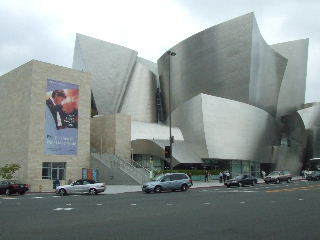 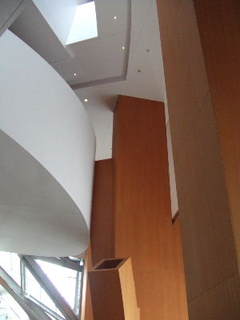 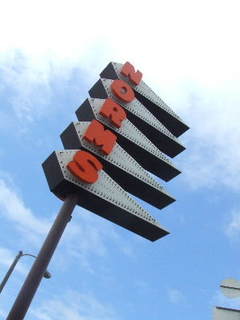 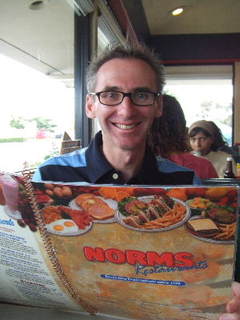 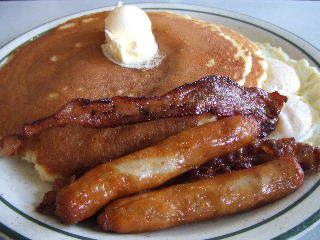 And,
of course, we visited the filming grounds of one of our favourite movies ever,
Bladerunner. Many scenes of which were filmed in the Bradbury Building. Look
familiar?
…. 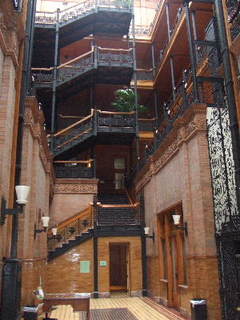 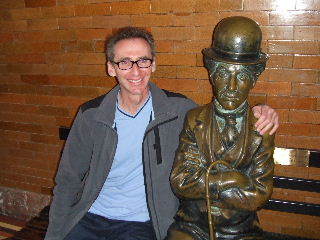 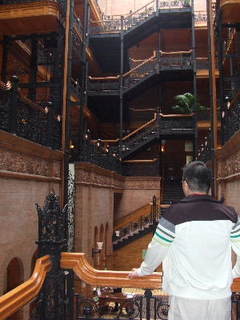 12) The Bradbury Building Lobby; 13) Brent with Charlie in the Bradbury; 14) G admires the architecture