Hard Candy
Patrick Wilson (going off the beaten track here), Ellen Page and Sandra Oh (in a bit part) star in this decidedly creepy and controversial film of one (psychotic) 14-year-old girl’s method of dealing with a pedophile. There is a lot going on in this very good film – almost all of it centering on manipulation. It is not for children and not for the faint of heart as it deals with very disturbing themes. I will not spoil the film by talking about two of the great twists in this film. For that, you’ll have to rent it yourself. Both Wilson and especially Page are excellent in what must have been difficult scenes to shoot. While the ending is dumb, dumb, dumb, my rating is still  8 out of 10.

Brick
Brick, directed by first timer Rian Johnson, is a visionary mystery movie that pays homage to the black & white film noirs of yester year. Unlike any mystery movie you’ve seen, Brick saunters at a quiet (and violent) pace as Brendan (played by Joseph Gordon-Levitt) trys to unravel the murder of his ex-girlfriend, Emily. A loner by design, Brendan seeks the help of his one friend, The Brain, and slowly sinks into the netherworld of drugs and deceit run by a character called The Pin (played by Lukas Haas). Never dull, and always entertaining, Brick unfolds piece by piece as Brendan edges closer to the truth of Emily’s murder. This film is, in a word, quirky. Quirky from its soundtrack all the way down to its characters who believe in themselves, despite their affected manners and way of speaking. My rating, for being so utterly different, 8 out of 10. 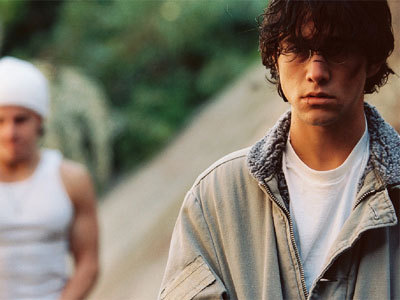 Mirabelle
G and I dined here last Saturday night. Mirabelle is on Yonge Str south of Eglinton (and is right beside another good restaurant, Quince). At heart this i place is a wine bar, with a tapas-inspired menu of small half-appetizer dishes alongside your regular main course fare. Despite James Chatto’s latest prattlings about food in the current edition of Toronto Life, Mirabelle is umpteen times better than his number one New Restaurant pick: Cava.

The wine list is great as it offers 2oz sampler sizes and some real gems. We had a superb amarone along with far too much food, including: mussels; apple-smoked cheddar; ‘potted shrimps’ (horrible name but brilliantly done); french onion soup and candied salmon (all as starters) before moving on to fish two-ways (a skate fillet breaded English style and served with bubble & squeak and shrimps), pomme frites and mac and cheese. With the exception of the onion soup (which was not great), everything was fantastic and we’ll be back. Dinner for two plus a half bottle of wine was $130. 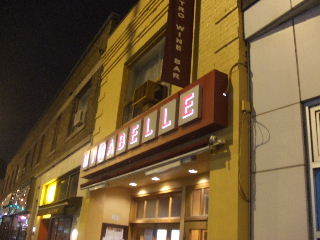 Saigon Star
On Sunday night after visiting the new Charlie/Yannie baby in Richmond Hill we ate at Saigon Star. A mix of vietnamese and thai cuisine and absolutely worth the drive to the suburbs. The food we had here was superb. A huge bowl of lemongrass grilled chicken pho was to-die-for and plenty for Blee, G and I. Garlic mixed veggies delightful and the Imperial fried rice with chicken and shirmp and coconut milk divine. We will be back for sure. Next time we’ll have the crab which seems to be THE dish at this fine establishment. Run don’t walk!