Last night, Blee graciously hosted a hotpot dinner for myself, G and Mimi. The timing was perfect as there is nothing nicer than hotpot when in the clutches of a winter storm. And, boy, has Toronto been in it last night (and today!). Snow on top of snow on top of snow.

To start, Blee made us gorgeous ginger champagne cocktails. Fabulous!  And then it was into the hotpot we dove! The thing about a hotpot is that suddenly you’re like OMG full, since you’re not really understanding just how much you’re chowing down. Still, what a wonderful way to commune with friends. 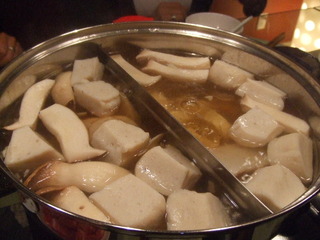 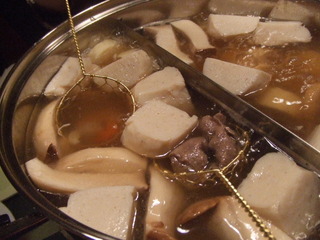 6) fishballs, mushrooms float to the top; 7) our cages with lamb, shrimp, beef and pork go in

Dessert was poached pears stuffed with … wait for it … a chocolate ganache. (Brent shakes head). To-die-for! 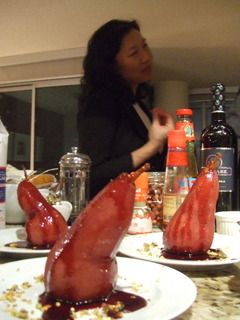 8) Mimi and the pears

Fahrenheit 9/11
It’s interesting to watch Michael Moore doing his usual shtick – this time with Geroge W Bush, September 11 and the invasion of Iraq on his mind – six years after the events and 3 years after its premiere at Cannes. He meticulously lays out Bush’s illegal seizure of the Presidency thanks to corruption in Florida, his panache for holidaying, his connections to the Saudis and Bin Laden, and his inept ploys (which Americans for the most part swallowed) that led the US off the hunt for Bin Laden and on to a crusade against Iraq to keep his oil friends on side. Moore’s obviously dislike of Bush aside, the film makes for compelling viewing, though feels dated now since much of what he alleged in 2004 is known to be fact today. The best part of Moore’s film, simultaneously brilliant and disturbing, are the slow motion clips of Bush being told (in Sarasota) that America was under attack on the morning of September 11th. Never has a president looked more ridiculous then in those few minutes of film. Never has a president looked more dumb and useless. 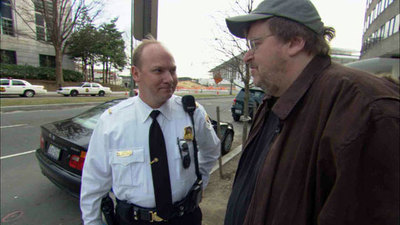