Yesterday, I had the honour to present to a delegation of eleven way-up South Korean politicians who were visiting Toronto.

Though I rarely post about work … afterall, for me, work is that silly, inconsequential thing I do between – well – everything else that’s far more important in my life … I still thought it would be fun to share the obligatory photo op of the customary exchange of gifts that occur in such situations. In this case, I am receiving a beautiful, hand-carved/painted wood print of a troop of traditional Korean musicians from the delegation lead, Councilor (name removed for privacy).

Harold and Kumar Escape from Guantanamo Bay
John Cho and Kal Penn return to their Harold and Kumar roles in this lowbrow and tasteless comedy, directed by Jon Hurwitz and Hayden Schlossberg. The problem with this road trip is its tastelessness. In particular, Guantanamo Bay is still too fresh a subject to be mocking, and using it as the basis for the film is just plain weak script writing. Cho and Penn are still as great as the potheads for sure but the film isn’t as fresh as its original. Neil Patrick Harris plays himself and the adventures the lads take with him are the highlight of the film. The love story, such as it is, was well done and it’s unfortunate there couldn’t have be more love, and less rude and lewd. My rating 5 out of 10. 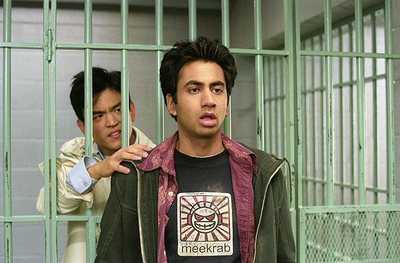 2 Responses to The Koreans