Heavens, the Hills were Alive

Posted on November 8, 2008 by appsscraps

We met up with Blee and Ironwoman Laura on Saturday to start our Mirvish subscription for this year by seeing the North American premiere of Andrew Lloyd Webber’s remounting of the classic, The Sound of Music at the Princess of Wales Theatre. We have been disappointed over the past couple years with Mirvish’s offerings, especially the embarrassing Dirty Dancing (who’s woeful banner still graces the balcony stair access at the Princess). I did not have the time of my life watching that production.

The Sound of Music, however, is a whole different show, returning uTorontonians to the classic days of stage when Showboat, Phantom, and Mama Mia graced the stages of our theatre district. This is a great show!

As most Canadians know, this production was built up over the summer by a reality TV show – aptly titled “How Do You Solve a Problem Like Maira” – which allowed Canadians to choose who would ultimately get to play the lead role of Maria. The two finalists were Janna and Elicia. While Elicia actually won, everyone knows the better of the two was Janna and on Saturday we were delighted to know she, in fact, was playing the title role in our performance.

The staging is great, the transitions great, the singing – the children and The Captain aside – great. I loved how Webber took some of the familiar songs and placed them differently within the story – using “The Lonely Goatherd” to calm the scared children in Maria’s room rather than the usual “A Few of My Favourite Things” for example. There are three new songs commissioned for this production, none particularly memorable in the usual genre of Andrew’s music. And the staging of the final concert in Salzburg is exceptionally well done and utterly eerie with its use of Nazi livery:it felt like it must have actually felt being in a Nazi-occupied Austria shortly before the war. Very creepy.

As a self-confessed Sound of Music addict and affiando, someone who has, yes, even done the Sound of Music tour in Salzburg, this production is worth seeing. When it finally makes its way off the stage here to tour Chicago, New York and Los Angeles, get out and buy a ticket. 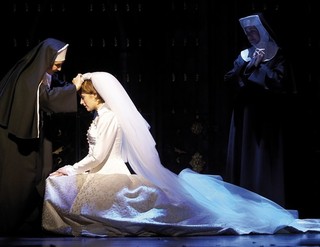 2 & 3) stage shots from the production from Mirvish Productions

1 Response to Heavens, the Hills were Alive