I was reviewing my annual IMDB statistics on movies I’ve reviewed over the past three years (261 of them). What is interesting is the discrepancy between the number of reviews at IMDB and my other two review sites:  Zip.ca (186 reviews) and AppsScraps Movie Reviews (250 reviews).

Why that’s the case is beyond me and I’m surely not going to try to figure out which are missing. Still, damn, that’s a pile of formal reviews which I should compile into a book someday.

All that to say, here’s a couple more to add to the list I watched yesterday.

The Day the Earth Stood Still
While the special effects were top notch, and director Scott Derrickson kept true to Edmund North’s classic 1951 screenplay, including the uber-fabulous alien robot-guard Gort, this is an awful movie. The main problem is (and it simply wrecks me to admit it) Keanu Reeves as Klaatu, the majordomo boss alien, can’t act. I adore Keanu for purely sexual reason yes, but not even watching his wonderful body move through an hour and a half of wooden acting was enough to save the film. Things are no where helped by Jennifer Connolly as the bright geneticist Klaatu takes a liking to, and worse by Kathy Bates in one her most desperately horrible roles ever. Dreadful stuff. Robert Wise’s 1951 version (yes, that same Robert Wise who directed The Sound of Music) remains the definitive one to rent. If you opt to watch this for the special effects, by all means go for it, but find a copy of the band Klaatu’s great first album from 1976 and put on “Calling Occupants of Interplanetary Craft” to avoid the talky bits. For the special effects solely, my rating 3 out of 10.

No Regrets (aka Huhwihaji anha)
Korean director Hee-il Leesong shows us the payoff when a nation supports its young filmmakers. South Korea, I still maintain, is producing some of the finest directors out there. In this sorrid tale a young orphan Su Min (played by Nam-gil Kim)’s factory job is saved by the intervention of the boss’ closeted gay son, Han Lee (played by Young-hoon Lee). But Su Min ends up quitting anyway to take up a job dancing naked at a gay karaoke club where the staff provide any level of sexual service you’d like. Han Lee soon follows smitten with his love for Su Min. The film is well done, though could have benefited from fewer corny bits (some perhaps lost in translation true) and the – seemingly – odd plunge into noirish revenge at its end. With a few more films under his belt, Hee-il Leesong will refine his skill and provide us a movie filled with scenes as moving in their emotional and visual statement as the couple he captured in No Regrets. I will remember Su Min, his outstretched hand tossing his friend’s ashes from the car as it speeds down the highway, and the lovers whispering their secrets to each other, for some time.  My rating 7 out of 10. 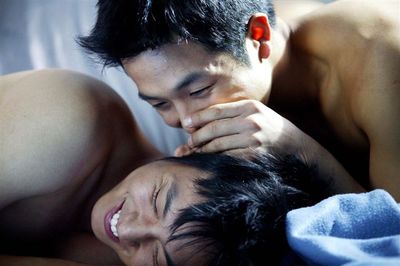