I’ve been remiss on updating movies I’ve seen the last two weeks while out and about, on holiday, and on (too) many airlines flights … and gosh, next week off to Vancouver … so, away we go ….

Confessions of a ShopaholicTied to every woman’s worse nightmare/joy (take your pick) Confessions of a Shopaholic brings to film Sophie Kinsella’s wildly popular series of books about one Rebecca Bloomwood’s (Isla Fisher) battle with shopping addiction on a grand scale. Frankly, this reviewer was not expecting much as the dvd slid into the machine, but in the hands of director PJ Hogan and with Kristen Scott Thomas (as Alette Naylor), John Lithgow (as Edgar West), Joan Cusak, and John Goodman all in the mix, the film works marvellously. The plot moves along as smartly as the fashionistas and Rebecca is able to come to terms with her addiction in a way that is both satisfying, funny and utterly endearing. Well worth a rent on a Sunday night. My rating 7 out of 10. 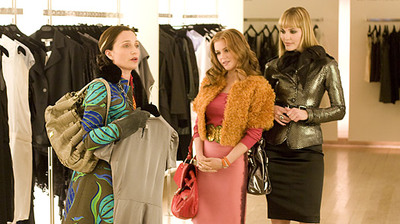 The Hangover
Vulgar, violent, unfunny and with a dreadful premise, The Hangover will leave you racing for the the next AA meeting. But maybe that’s its point? When soon-to-be-married Doug (Justin Bartha), Doug’s two best buddies Phil (Bradley Cooper) and Stu (Ed
Helms), and his finace’s strange brother Alan (Zach Galifianakis) head out on the road for Doug’s stag party in Las Vegas, plenty goes wrong including what I thought was disturbing scenes with the baby in tow. Directed by
Todd Phillips with “Jackass” sensibilities, this film warrants a medal for bad taste. My rating 2 out of 10. 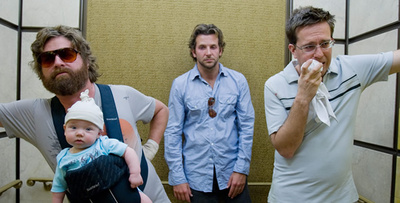 Harry Potter and the Half-Blood PrinceThe regulars return for the next to last installment of the Potter juggernault with David Yates directing. Everyone knows their role here and Daniel Radcliffe (as Harry Potter), Michael Gambon (as Professor Dumbledore), Jim Broadbent (as Professor Horace Slughorn), Emma Watson (as Hermione), Helena Bonham Carter (as Bellatrix Lestrange) and Alan Rickman (as the creepy Professor Snape) pull them off with complete credibility. The film continues the genre’s look and feel and recreates the world of wizardry and witchcraft with stunning realness while keeping the usual tongue in cheek laughs and budding romances in the mix. It’s all very well done. But after what has been too many of these movies and the fact the film is too long by half, I just want little Harry to get on with it and knock-off Voldemort so we call it a day already. My rating 7 out of 10. 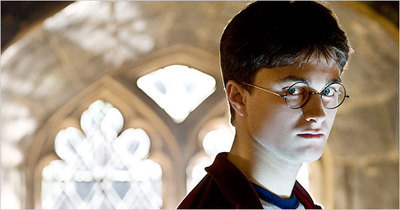 Watchmen1986. That’s how long this project has been in development. And anyone who has read the magnificent original graphic novel can understand why. Watchmen’s complex storyline and involved character development rest on an alternate future where Nixon did not resign, America won the Vietnam War thanks to average citizens who donned masks to become superheroes and the Cold War continued unabated, is no easy nut to crack. Even Watchmen author, the enigmatic Alan Moore, declined the invitation to give it go. So bully on director Zack Snyder for pulling it off.  Watchmen is filmed in a fashion similar to Snyder’s 300 and is a stunning visceral experience to its core. Odd, engaging, thought-provoking and mesmerising, Watchmen is a tour de force film decidedly not for kids. To paraphrase Moore’s line: “Who watches the Watchmen?” … we do … and love it! In a word, brilliant, and worthy of my rating of 10 out of 10. 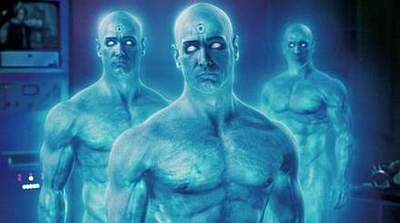 Race to Witch Mountain
Alexander Key’s 1968 novel Escape to Witch Mountain gets a new working by director Andy Fickman. When out of this world twins Sara (AnnaSophie Robb) and Seth (Alexander Ludwig) crash land their spacecraft outside of Las Vegas, they are picked up by Vegas-taxi-driver-with-a-past Jack Bruno (Dwayne Johnson) who soon finds himself immersed in a battle to keep the feds and a nasty ‘Siphon’ sent by bad-guy aliens to kill Seth and Sara at bay. Seems Seth and Sara are the linchpin to saving humankind’s destruction at the hands of the bad-guy aliens. On route they enlist the help of UFO scientist Dr. Alex Friedman (Carla Gugino) and the foursome, after far too many chases, find themselves captured. Resourceful as ever – this is Disney afterall – the group escapes and the the alien twins complete their mission and save earth. Yay! Race to Witch Mountain is a good film that keeps you engaged but ultimately falls short when plot is sacrificed for action. My rating 5 out of 10. 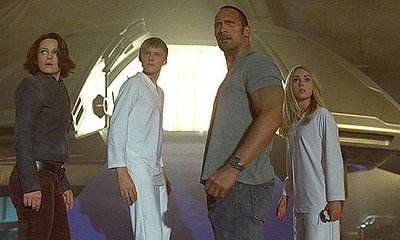 Duplicity
Directed by Tony Gilroy, Duplicity stars the always great Julia Roberts (as Claire Stenwick) and Clive Owen (as Ray Kovel), two former spies making ends meet (and more) as corporate espionage specialists working for competing firms with over-the-top CEOs –
Howerd Tully (the brilliant Tom Wilkinson) and Dick Garsil (Paul Giamatti). The stakes are high as the two companies vie to be the first to patent the greatest product since sliced bread: a cure for male pattern baldness. Amid the espionage, Claire and Ray work an awkward romance that hatches a plot to out maneuver both their employers and land the patent first. Duplicity is an excellent film with fine, fine performances and an intricately woven, intellectually stimulating, storyline that requires attention and patience. And while some reviewers have found fault with this very point, the richness inherent in Duplicity on so many levels makes it one of this reviewer’s favourite films this year. My rating 9 out of 10. 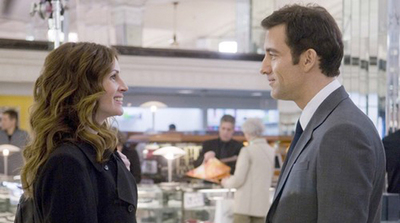 Silk (aka Gui si)When a team of misfit scientists enlist the aid of a Canadian photographer to photograph a ghost living in a Taipei apartment house, all manner of creepiness takes flight. Inside a small room they find the photographer dead and, with the aid of a device known as the Menger Sponge, capture the spirit of the young ghost within the room. Directed by Chao-bin Su, Silk stars Yosuke Eguchi (as the crippled scientist-inventor of the Menger Sponge, Hashimoto) and Chen Chang (as Detective Tung, the lipreading specialist brought in to read the silent lips of the boy ghost). What ensues is a tight thriller/horror married to a philosophic tome on the hereafter as Tung discovers the truth of the young boy’s murder at the hands of his mother and the silken threads of afterlife that connect the living with the dead. Silk is an exceptionally thought-provoking film that succeeds thanks largely to the fine acting of Chen Chang and Su’s fine direction. Ease back under the covers on a dark night and be prepared to be creeped out. My rating 8 out of 10. 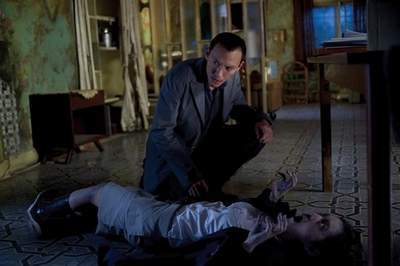 The Hottie & the Nottie
Paris Hilton stars. That is surely enough to have any moviegoer flee. Full of rank cliches. That is surely enough to make any moviegoer cringe. A done-before story of the ugly sister, this time Cristabel’s (Paris Hilton) childhood best friend, June (Christine Lakin) who metamorphoses from horror to beauty thus turning the head of Nate (Joel Moore) who initially only had eyes for Cristabel. Yawn, you’d think. And you know what, despite all this; despite the cliche and cringe factor and dreadfulness is a genuine feel good film that really grows on you. I know I’m in a minority here, but I found The Hottie & the Nottie entertaining, fun, funny, and real despite its many flaws. Thanks, I suppose to director Tom Putnam for keeping things on track. Totally worth a rent on a lazy summer afternoon at the cottage. My rating 7 out of 10. 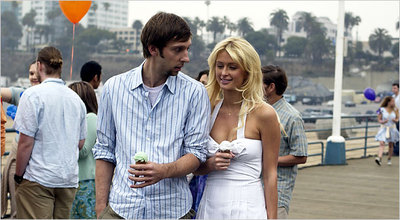 The Eye is the americanized version of Jian Gui, the Hong Kong film directed by the Pang brothers in 2002. Directed by David Moreau and Xavier Palud, this version stars Jessica Alba as Syndey Wells, a blind violinist who receives a cornea transplant from a young Mexican women, Rosa, who committed suicide after being harassed as a witch. As her sight returns so do disturbing images of the young girl’s life and worse, the ability to see ghosts living amid us in the real world. With the help of her doctor, Paul Faulkner (Alessandro Nivola), Syndey travels to Mexico to confront her disturbing visions and help Rosa transition past her purgatory. As is often the case with the americanization of asian films, this one fails as poor Jessica Alba still can’t figure out how to act with any measure of believability and the directors opt to give us a silly Hollywood ending rather than the fine, if disturbing, one envisioned in the original film. My rating 4 out of 10.

Coraline
A dark and magnificent fable executed in gorgeous animation based on the graphic novel of the same name by Neil Gaiman. When wee lass Coraline (voice of Dakota Fanning) uncovers a secret door in her new house, she is transported to an alternate world where her parents Mel and Charlie, their eyes replaced by black buttons, do any and everything she fancies. Lulled by the beauty of a world centred entirely on her, Coraline spends more and more time with the Other Mother and Other Father but soon notices cracks within their facades. When they declare she should remain within their freakish world if she would only have her eyes struck out and replaced with buttons, Coraline, aided by a cat (the voice of Keith David) must summon all her courage and wits to escape. Directed by Henry Selick, Coraline is a tour de force examination of self and the fact the grass is sometimes never greener on the other side. Not for kids. My rating 10 out of 10. 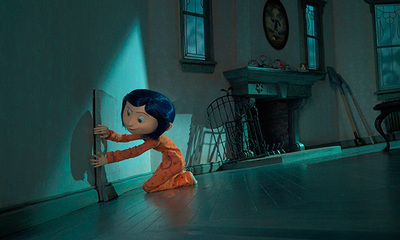 3 Responses to A movie marathon