Knowing
Alex Proyas directs Nicholas Cage as John Koestler, a MIT professor and astrophysicist whose son, Caleb (Chandler Canterbury [unfortunate name isn’t it]) ends up in possession of a letter written by an odd little girl named Lucinda (Lara Robinson) way back in 1959. That letter, not more than a series of random numbers, Koestler discovers, actually predicts the dates and number of casualties of every major disaster for the past 50 years.  Naturally, the letter still has a couple dates pending so Koestler begins his quest to understand these final entries, including the letter’s last which gives a date for destruction and the letters “EE” meaning “everyone else”. The film up to this point is actually quite engaging, the lack of character development aside. But enter the end of the world predictions (this time via a solar fare) and the appearance of “whisper people” – aliens who arrive to whisk off the Koestler’s kids to start over again and the whole film goes off the rails. Knowing proves the old adage that having a great story premise and pulling it off on the screen is often harder than you think. Yet, for the rank silliness that arrives about two-thirds of the way into the film, Knowing makes a great go of it at the beginning including two utterly amazing scenes: a plane crash that is stunning and a subway crash that demonstrates all that’s good about CGI. Is Knowing a good film? Not particularly, but it’s certainly worth a rent. My rating 5 out of 10.

Le Scaphandre et le Papillon (aka The Diving Bell and the Butterfly)
The true story of French Elle magazine editor Jean-Dominique Bauby (Mathieu Amalric) who at age 43 suffered a stroke that left him with trapped-in syndrome, completely aware and cognizant but utterly paralyzed save the ability to blink his left eye. Trapped within himself, he took to dictating a series of letters, conveyed by blinking each letter to his assistant Claude (Anne Consigny), that convey the joy and sorrow of his experience. Director Julian Schnabel takes us literally into Jean-Do’s world filming much of the movie through his left eye. It is a daring and effective device that serves to heighten the poignancy of Jean-Do’s situation. While tragic certainly, and while Jean-Do was no saint and lived a crazy life, he comes to terms with his situation and shows us all we should never feel sorry for ourselves or take our wondrous time here for granted. Le scaphandre et le papillon is a brilliant film, brilliantly directed and brilliantly acted, with a special nod to the regal Max Von Sydow who gives us some gorgeous scenes as Jean-Do’s father. The real Jean-Do sadly passed away from pneuomia two days after seeing his book published. A film everyone should experience. My rating 9 out of 10. 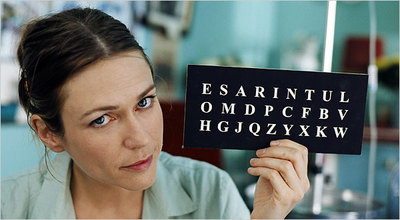 Peur(s) du noir (aka Fear(s) of the Dark)
Peur(s) du noir is a montage of six uniquely different vignettes laced together piecemeal in the fashion of a dream. Two pieces anchor the film, Blutch’s highly stylized – but ultimately meaningless – story of a macabre nobleman and his pack of brutal dogs who ends up getting his comeuppance and Pierre di Sciullo’s beautifully woven geometric animation voice-overed with our common fears. The other four stories are all stunning in their graphic nature but hit and miss in their delivery. A young lad who ends up trapped by a sado masochist girlfriend-cum-insect was kooky, well drawn and fun; the Japanese-anime inspired story of a little girl possessed by the spirit of a dead samurai was strange but engaging; and the late-night traveler who ends up in an Edward Gorey-esque home with its resident ghost was excellent. With voice over by the late son of Gerard Depardieu, Guillaume, and directed by Blutch and Charles Burns Peur(s) du noir has enough great animation to make it a must for any anime, animation or art-house filmgoer even if the horror is, despite the great use of black ink, rather light. My rating 6 out of 10.