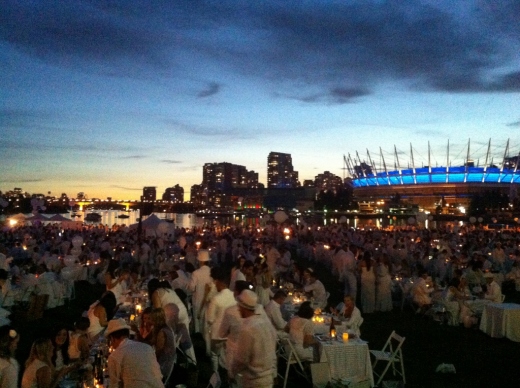 Diner en Blanc is now celebrating its 25th anniversary globally after starting in Paris in the summer of 1988. Back then a gentleman by the name of François Pasquier had just returned to Paris after a few years abroad and hosted a dinner party to reconnect with friends. So many wished to attend that he asked them to convene at Bois de Boulogne dressed in white, so as to be recognizable to one another. Each attendee was also asked to bring a friend. From that humble beginning Diner en Blanc has now evolved to a global phenomena.  What makes the event so unique is its location – kept as a surprise until you meet your table leader the night of.  Last year in Vancouver, the event (its first) was held at Jack Poole Plaza (otherwise known as the Olympic Flame Plaza) in Coal Harbour.

When Pasquier’s son, Aymeric, moved to Montreal he brought his father’s tradition with him then partnered with Sandy Safi to bring the concept to the United States (firstly in New York City) and now operate an international organization that offers Diners in places as far-reaching as Singapore, Haiti, Rwanda and Mexico City. British Columbians have jumped on the bandwagon in the biggest way and to date, Diners here are hosted in Vancouver, Victoria and the Okanagan Valley.

To attend, you need to be a member (CAD$5/year) and then cross your fingers when the invites go out.  Registration is done on-line, and, on the low end will cost you and a guest CAD$70. If you opt to purchase liquor (we did) or one of the various levels of catered meals (we did) or a ticket to the after party (we didn’t), your elegant picnic’s price will rise rather dramatically. We spent CAD$200 plus more for clothes, a table and two folding white chairs …. as yes, you are required to bring a whole list of non-negotiable items: folding table; chairs; cutlery (no plastic allowed); china (no paper, no plastic allowed); stemware (no plastic, no paper, no styrofoam allowed); tablecloth and linen napkins and whatever other accoutrements you may wish to make your table look fabulous.

On the appointed night you meet with your table leader at a pre-determined location (ours was Waterfront Station) and then either walk, take transit or are bused to the secret diner location. This year’s location was at Science World at the foot of False Creek – an iconic spot in Vancouver and one of the mainstay places for television crews taking panoramic shots of downtown Vancouver.

When all is said and done, the event is great, great fun with people of all ages – including rows and rows of seniors out for the evening, which was terrific to see. It is pretty much a culinary flash mob dinner for rich folks truth be told. But that’s okay. This year’s event hosted 2,500 people and had a waiting list of 11,000. It will be interesting to see where they take us next year. I’m suggesting dinner on Cambie Bridge or on the beach at English Bay.

If Diner en Blanc visits your city, certainly do take the opportunity to go; little knowledge of French is required, honest. 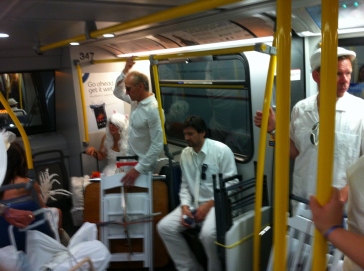 3) on Skytrain heading to Main station

4) arriving at Telus World … of note: also last night Black Sabbath was having a concert at Rogers Arena so you had this bizarre juxtaposition of Diner guests with Black Sabbath fans wandering the streets!

5) time to set up tables

7) here’s our table … woman in lower left with white bandana is our table leader, Meena 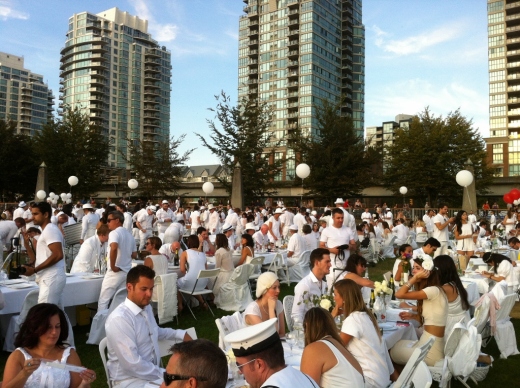 10) the music stats and the sun sets 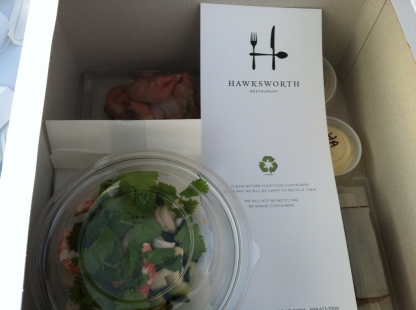 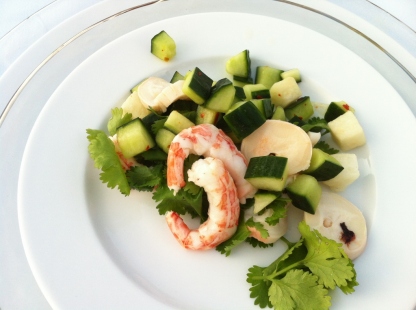 15) the official start is announced by the waving of napkins 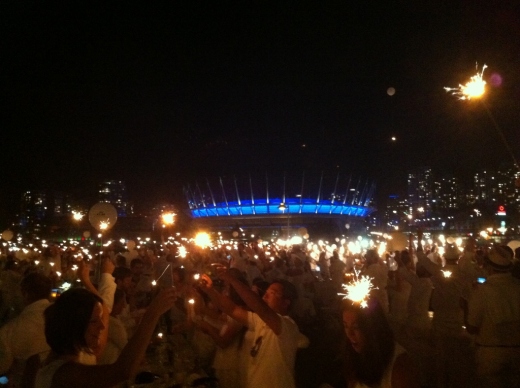 19) here’s the video of the sparklers