We headed south and east in February, alighting first in New York City for but a day before flying south to Puerto Plata for a week visiting my cousin Paul, his beautiful wife, Su-Ming, and their twins who all live in Cabarete, Dominican Republic. Cabarete is noted as one of the hotbeds of kite surfing in the world and is, oh, about a 20-minute drive east of Puerto Plata. That drive is harrowing as the DR has some of the most dreadful drivers on earth and you share the narrow roads with mopeds, pedestrians, bikes, motorcycles, cars, trucks and buses.You are guaranteed to see or come across accidents … and we did a couple times during our stay.

We had a tremendous time catching up as it’s been 3 years since I last saw Paul when we both were living in Toronto. Before that, heavens, we were babysitting the twins when they were but wee babies (see here). The linga franca in the Paul/Su-Ming household is Spanish … a language I studied in university (my final year thesis was on the impact of the Spanish Conquest of the New World on Spain [despite the wealth, it proved Spain’s undoing]).

As one can imagine, Dominican Republic is a fair distance from Vancouver and we routed through Newark heading down and back up upon our return. Despite poor weather in New York City, the flights were all on time and United did a nice job. Business class was fine but after Singapore Airlines, well, nothing really compares. 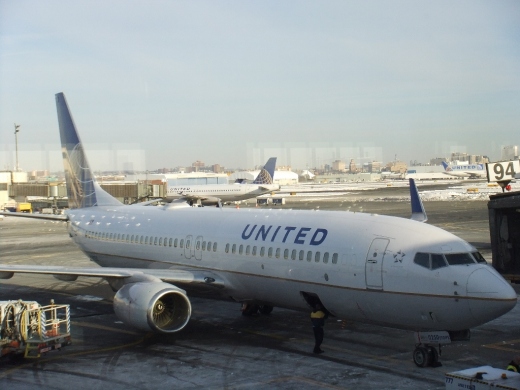 2) our plane awaits us in Newark 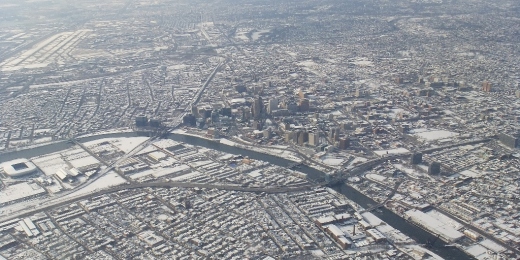 3) there’s the city as we leave the airport 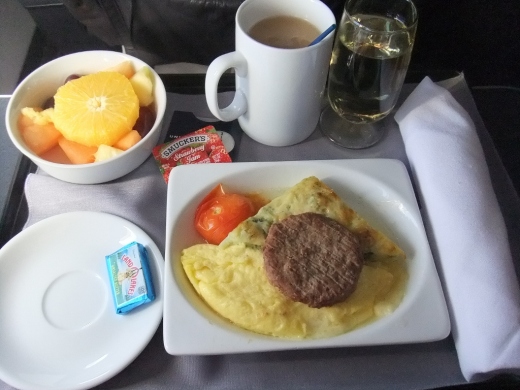 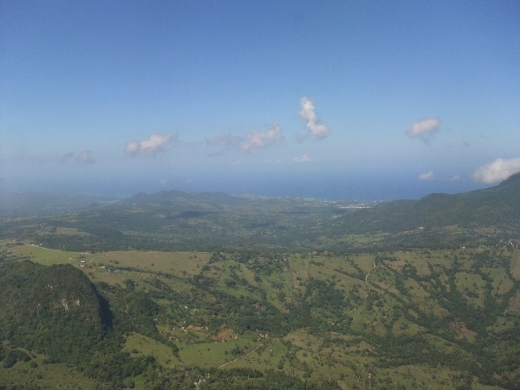 I have been to the Dominican Republic previously … I actually learned to juggle thanks to Club Med Punta Cana back in a life that now seems eons ago. Interestingly, Su explained the folks who originally established Puerto Plata as a sun destination (in particular the uber rich Dominicans who built the Playa Dorado resort area east of the city) abandoned it to establish what is now Punta Cana. When I was there all those eons ago, Club Med was the only game in town and it was rumoured that they built the Punta Cana Airport, which at the time, was but a straw hut. Today, the Dominican Republic is a mecca for tourists and expats of all kinds and the community of expats Paul & Su-Ming socialize with represent Australians, Canadians, Argentinians, Brits and South Africans. The country has a vast working class, a small middle class and a tiny (and tremendously wealthy) upper class. There are also tens of thousands of illegal Haitians living and working in the country having fled what is the despair in their homeland. While tolerated, Haitians are viewed very unkindly.

We spent our time whiling away the days in between touring Puerto Plata; visiting many (many!) a beach; eating and drank ourselves silly; playing with the boys; walking Bruno along the beach each morning; and spending an inordinate amount of time in the pool and body surfing in the Caribbean. It was heavenly and Paul & Su-Ming were the best hosts ever!

Puerto Plata was founded as a town in c. 1502 and was actually designed by those famous brothers, Christopher and Bartolomé Columbus, who first ‘discovered’ it in the 1490s. It is rumoured that Columbus named the city Puerto Plata (Port of Silver) because of the silvery appearance the mist took on the city’s background mountain, Isabela de Torres. 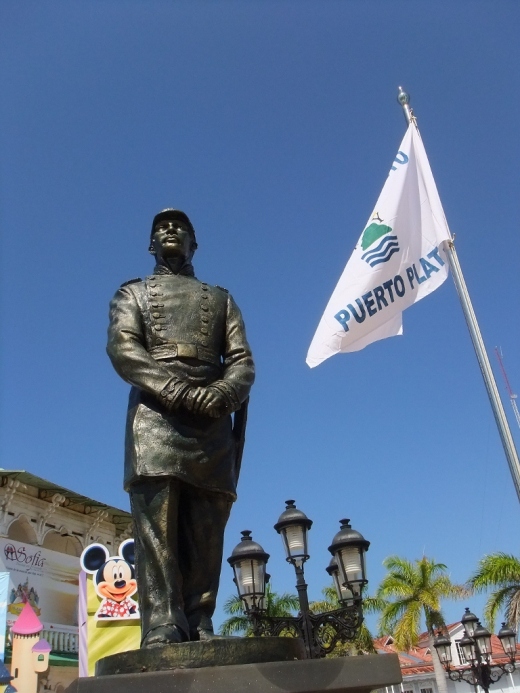 11) statue of Gregorio Luperón who was instrumental in DR nationalism after the country’s annexation by Spain in 1860s; Puerto Plata’s international airport is named after him 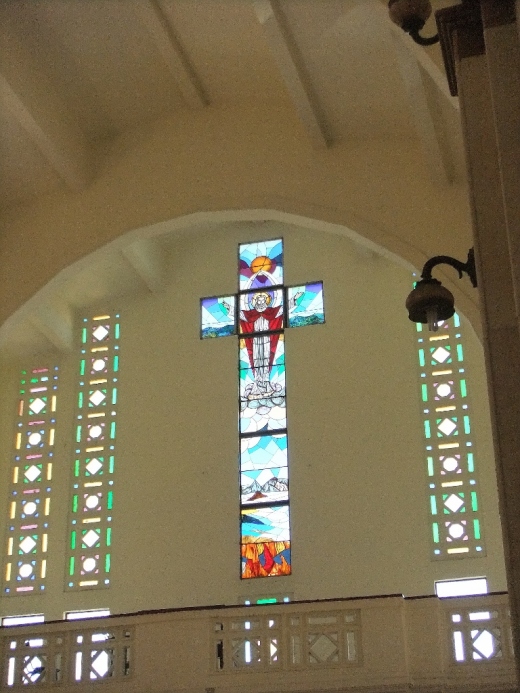 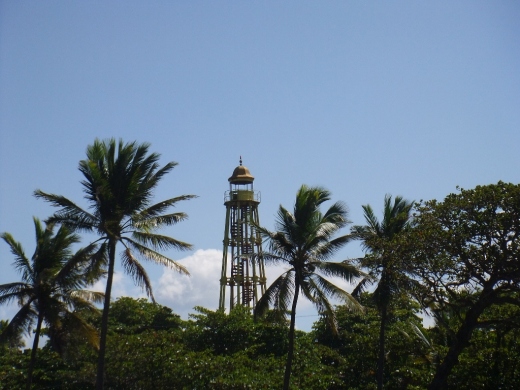 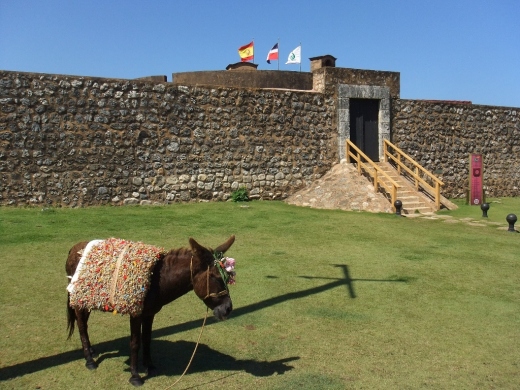 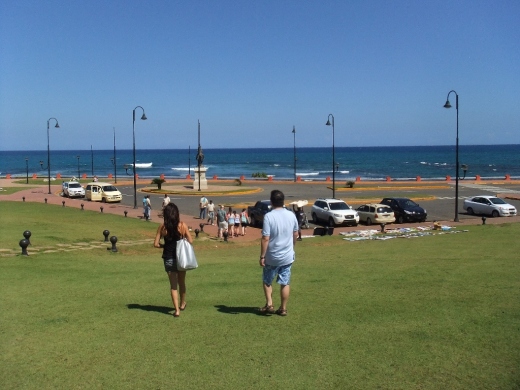 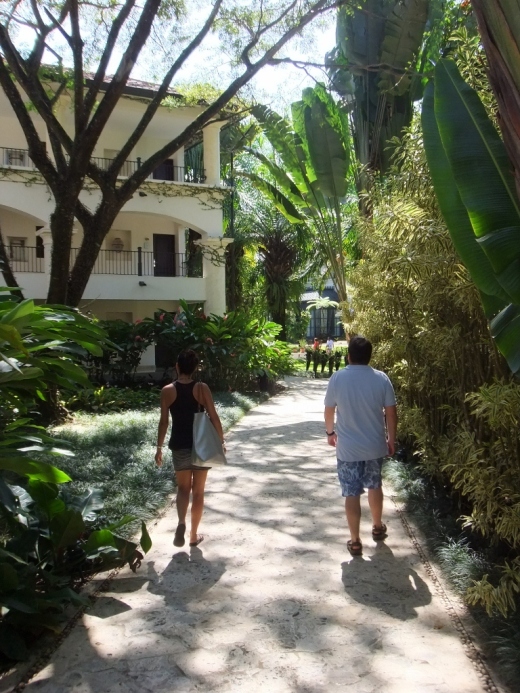 19) leaving a posh lunch at the Verandah at the Casa Colonial Boutique Hotel, inside the gated community of Playa Dorada 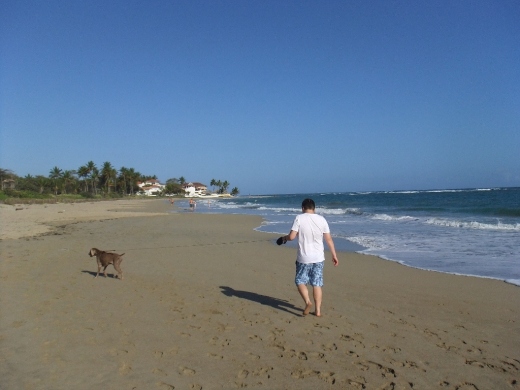 20) G takes Bruno out for a morning walk 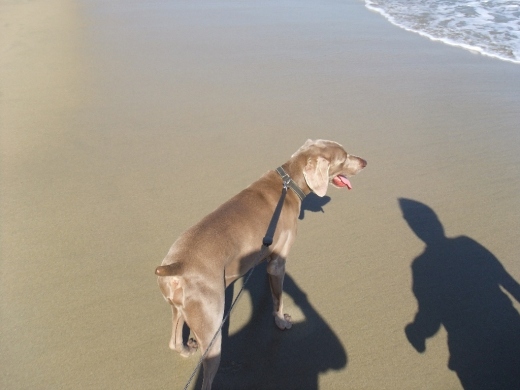 22) conch for sale at the end of Kite Beach

23) a stop on route to the city of Gaspar Hernandez

24) fisherman boats on the beach at La Yagua 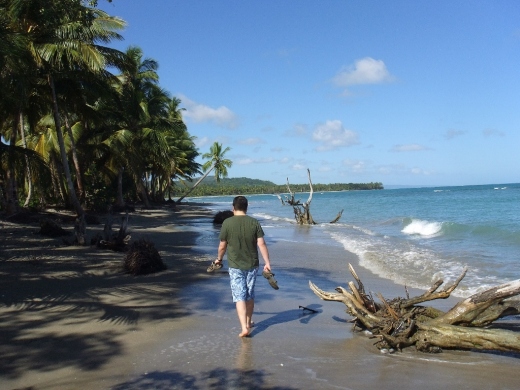 26) G strolls along the beach near La Yagua

27) I thought it was a porcupine or maybe a hedgehog!

As you drive further east – and if you know the cutoff (as it is not signed) – you’ll find yourself at the to-die-for wee beach called Playa Caleton. Should you ever find yourself in the DR and on the north coast make the point to get here if you can. It’s a terrific little 500-foot beach with calm water perfect for snorkling. There is an awesome restaurant (really more a collection of huts that folks cook at) right near the beach. Washrooms are, well, spartan. You can hire a lad upon arrival who will be at your beckon call the entire day. He’ll bring you beach chairs, a table, take your food and drink orders and dart back and forth ensuring you’re well taken care of. Su and I ordered deep-fried fish while G ordered lobster. These came with a spread of salad, beans (OMG the beans were SO good!), rice, and plantain chips. El Presidente – the beer of the DR – is plentiful and cheap. The afternoon cost us DOP3,000 or about CAD$70.

29) a fisherman at Caleton 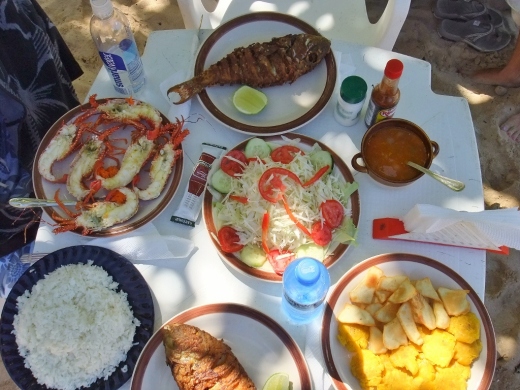 Eating at Su/Paul’s is awesome as it is plenty of seafood. What’s neater is that Su has a local fisherman whom she rings, as needed, who will bring fish literally to the front door. One day he arrived with what you see below – a dorado (or what we call out this way mahi mahi). Better yet, he comes right into the kitchen and cleans and filets for you. Talk about fresh! 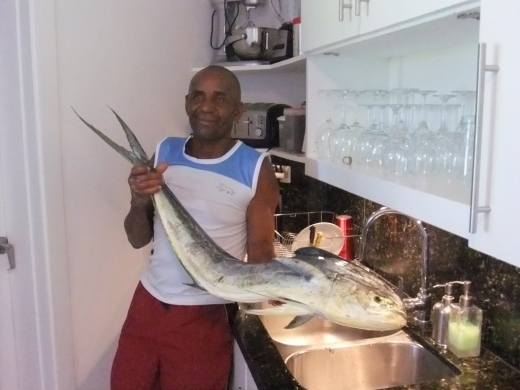 36) the lads watch some televison 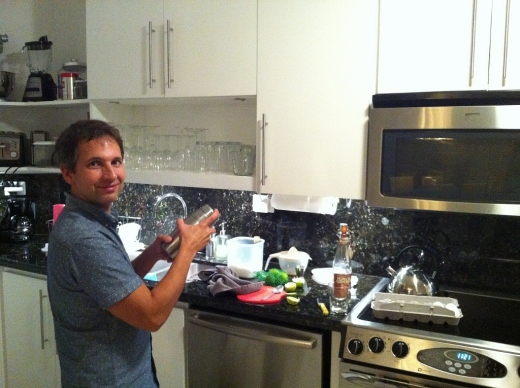 39) needless to say there were pisco sours 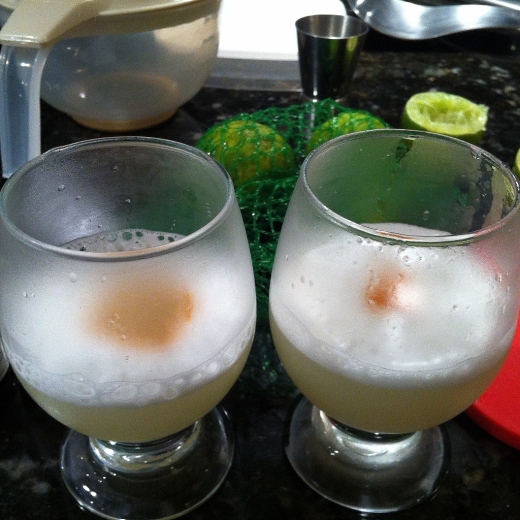 40) Su is Chilean and Paul and she lived for several years in northern Chile so Paul has definitely mastered making perfect sours! 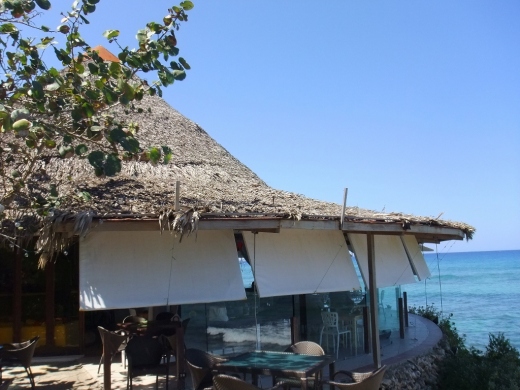 41) this was another of our favourite places to dine 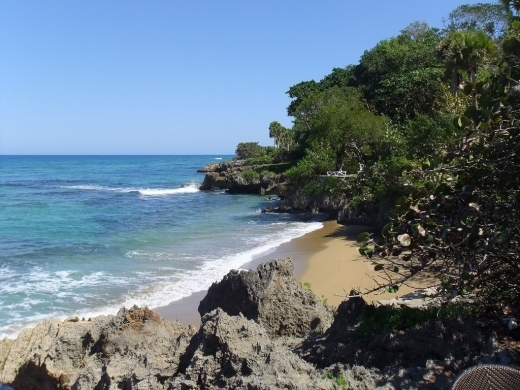 43) and a lovely, open air restaurant

44) the public beach at Sousa 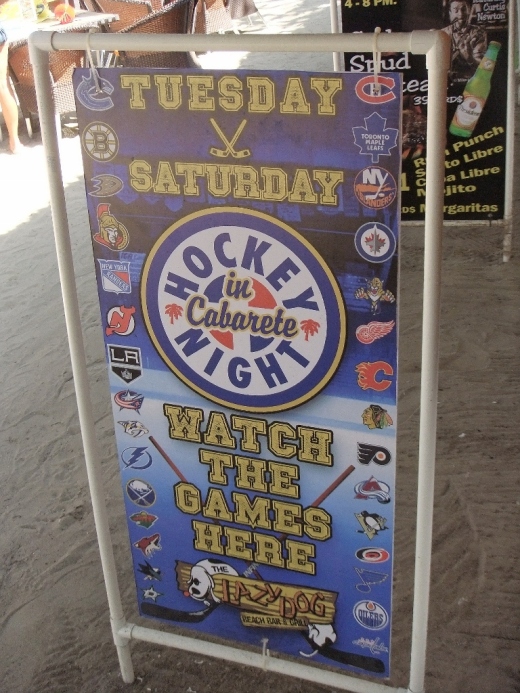 47) yes, even on Cabarete Beach you can watch hockey :D

49) one night was a boys night out and Paul, G and I headed to Papi’s for panfuls of scampi done in garlic sauce 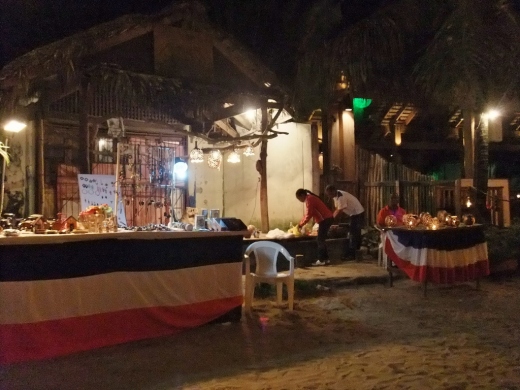 51) you can shop right on the beach at night

52) we spent a lot of time in this pool lemme tell you! 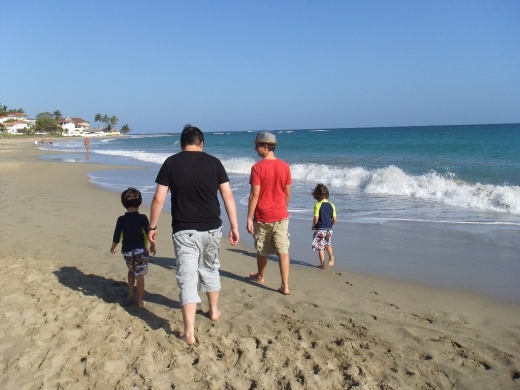 53) the lads head out for a walk one morning 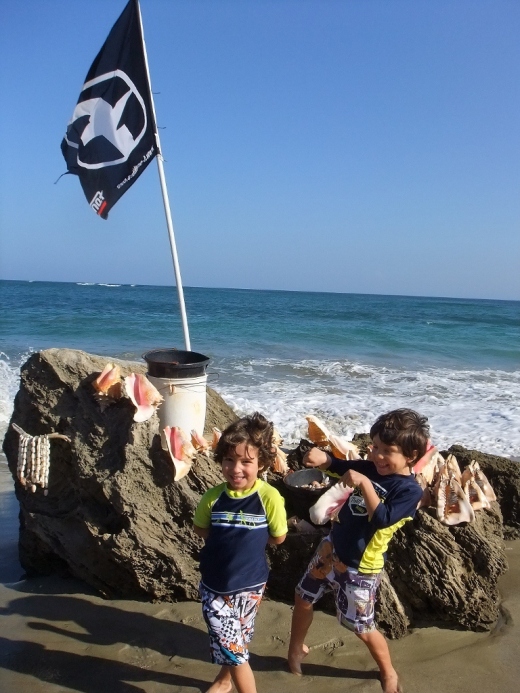 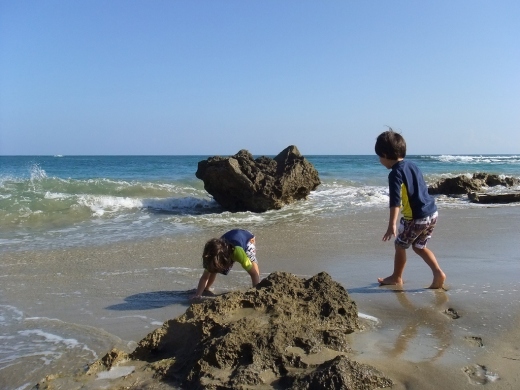 57) heading out on St. Valentine’s Day 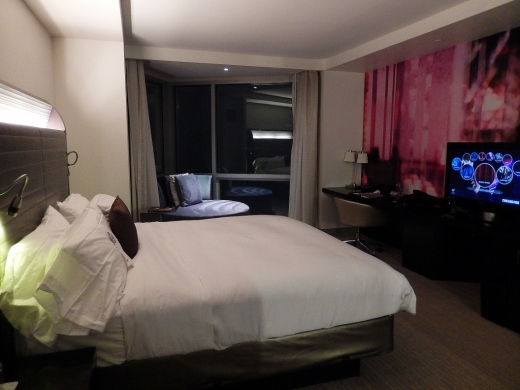 61) in Greenwich Village for dinner 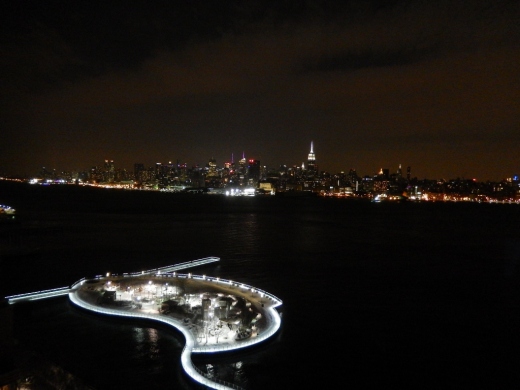 62) the view from our room looking across to NYC was fabulous!