The Canadian Opera Company is re-staging their 1998 production of Bellini’s opera, Norma in late March/early April. After failing to get a small role in Wagner’s Gotterdammerung (I wasn’t birdlike enough, I suppose) just before Christmas, I have landed a non-singing role as one of the druid warriors in Norma. Yay me!  Rehearsals start in a couple weeks. Francois Racine is directing.

These roles are great fun as you really get to learn an opera inside-out. Sorry folks, I am like the biggest opera fan!  How gay!

Anyway, Norma is famous for uttering the line: “It would have been better to die then to have known this man”, before climbing the fiery pyre to her death. Something we’ve all felt at sometime or another eh?!

The COC is often looking for guys to play these smaller roles (must be non-ACTRA). It usually comes down to whether or not you fit the costume. You’re paid a pittance but if you like or love opera, it’s an amazing way to learn more. And let me tell you, it’s very addictive standing on the Hummingbird stage with everyone clapping hehehehe … pride, damn pride! If you’re interested, let me know and I can connect you with the Supernumeraries’ Manager.

Thursday’s update: IGA no more.
G and I visited the IGA on Mt Pleasant for the last time on Sunday about an hour and a half before they closed their doors. There was maybe 5% stock left. Very strange sight to see. Discounting was down to 40%. My last purchase was a package of $1.99 birthday candles. Goodbye IGA! In three months time, we’ll see a new Sobey’s here. 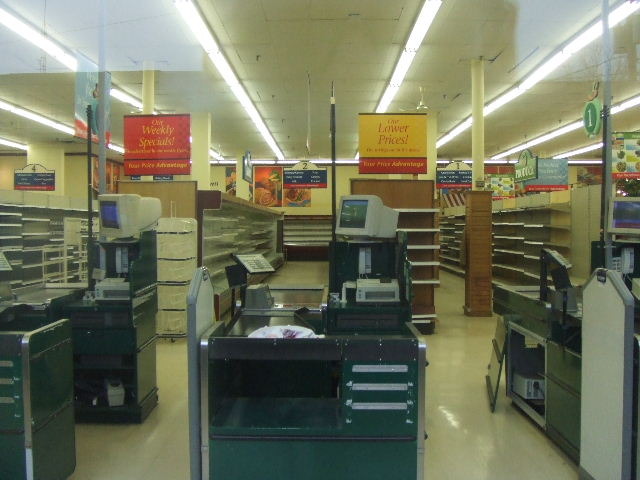 Empty IGA
Thursday’s adventure: Winterlude!
G and I are flying off to Ottawa now to skate on the canal (we hope!) and visit the funky new War Museum. WestJet Sue is flying in from Saskatoon to join us … hooray!  Haven’t see WestJet Sue since connecting in Halifax in May. Another whirlwind tour, though not quite as silly as our ‘lets-fly-to-Vancouver-for-the-weekend’ dash in early December. That I would not recommend … it’s way too much with the time change and flight time.