Posted on March 13, 2006 by appsscraps
Well, it is that time of the year again. After the NFL Playoffs, my most favourite time of the year: the men’s college basketball  playoffs better known as “March Madness“. You can get the brackets here. So, time to skip work over the next couple Thursday/Fridays and come watch the Madness unfold with me! Picks? Picks? …. UCONN all the way this year! Actually, I think there’s a good chance of all four No. 1 teams going through to the Sweet Sixteen this year.

Last night we did our first full run through of Norma … from start to finish. It’s so neat to see the entire bits and pieces come together; alright with a few glitches here and there. I’ll bet you anything, Director Francois will make us do the chorus scene in Act Two again tonight. We really botched it I think. Thank heavens Richard Bradshaw, the Canadian Opera Company’s President, had exited the rehearsal area by then.

Here’s a sneak peek at the stage, which is suppose to represent a burned out forest. Those nasty Romans you see have invaded our Celtic territory and burned everything. In Act Two this area morphs into a Celtic Temple. 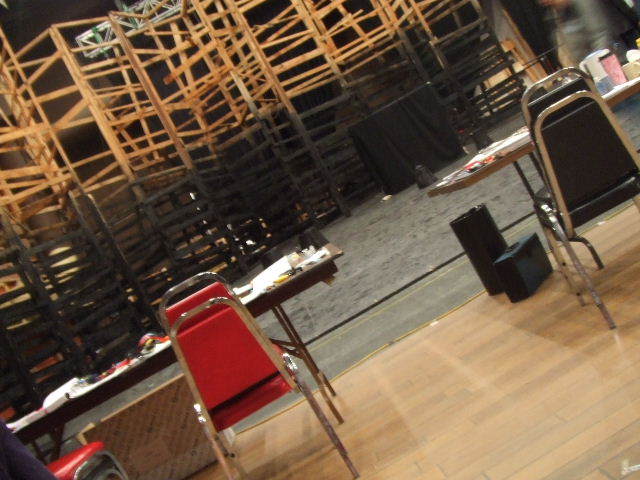 I’ve rehearsals again tonight and likely Tuesday and/or Wednesday. Thursday we’re off as the sets get moved from the Imperial Oil Rehearsal Theatre on Front Str to the Hummingbird Centre. Friday night we have our first rehearsal on that stage, likely in costume! Woohoo!
The Bowling Party (sans Bowling)

Tennis Star Suzie planned a bowling party at Bathurst Bowl on Friday. The invite mentioned cocktails at Suzie’s place anytime after 6pm prior to heading out to bowl.  Sounds good.  So, G and I and Blee and others descended on Suzie’s down at Harbourfront. On arrival beautiful blue “Thames Martinis” awaited us. Denyse arrived. Laura arrived. Dave arrived. Sue Two arrived. Scots on the Rocks Annie was supposed to arrive but didn’t.

…. and so the drinking continued.

There was talk – ever so brief – of actually going bowling, but fortunately muddled heads and more drinks derailed this plan. Then around 9pm, the phone rang. It was Scots on the Rocks Annie who drove all the way from Kingston to join us…. and she’s been waiting at Bathurst Bowl since 7:30 for us to arrive! And she’d been ringing G’s cell phone and my cell phone for an hour and a half (but both of us forgot the phones heading out).

She did eventually join us and, damn, it was a great party. Lots of fun.

The party lines of the night:

And now a pause to bring you Brent’s jealously moment: Scots on the Rocks Annie is going to Italy in June for 6 weeks to cycle! Wah, Wah, Wah.