Posted on May 9, 2006 by appsscraps
So, Sunday afternoon
G and I decided to bake cupcakes. Now, you’d think cupcakes are pretty darn easy
to bake, right? …. seems not. Well, certainly not in my hands. I’m a firm
believer that all males – whether straight or gay – are missing the ‘baking’
gene.

Was it because I
halved the recipe? I mean how can you botch mixing 4 ingredients – self-rising
flour; eggs; sugar; vanilla? …. I’ll tell you how, put them in my hands!
Unmitigated disaster! Horrible! They were dry and chalky and we both couldn’t
help but laugh uncontrollably as we tried them. They were so sad, I couldn’t
even bring myself to take a digipic of them.

The buttercream was
also a challenge. We sourced umpteen recipes and decided on a ex-con Martha
‘meringue buttercream’. Whisk together eggs and sugar and then fold in butter
and vanilla. Also sounds pretty straight forward eh! Well, we initially got
buttercream that had the texture of ricotta cheese, which also brought us to
tears with laughter. G then did a little research on line and was able to
reconstitute the buttercream into something very nice and even pipable. Well
done G! 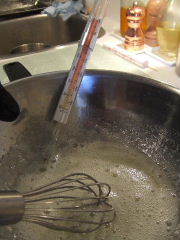 1) the sugar and egg whites get meringued; 2) adding in the butter; 3) the final product

Lesson learned here
is that we need to take some baking lessons, pronto!

As a side note to
this, I met Lady Sarah in an icky pub right across from Maple Leaf Gardens last
night prior to us attending an (yawn) Annual General Meeting. I was telling her
this story and she believes that girls (generally) are better bakers as they are
brought up from day one helping mothers in kitchens. Perhaps, perhaps eh.

I actually saw this
on Sunday night at the ROM. I loved this movie and it won an audience award at
Hot Docs this year. It is about Canadian Greg Hamilton and his fascination with
the Burmese game, chinoline (which is sort like playing with a hacky sac). He
spent 20 years learning the game and was the first foreigner ever to play it.
The documentary is great, and absolutely worth seeing should it pass through
your city. You can see snippets of the film here.

12 Responses to Cupcake and Buttercream Fiasco