The Toronto International Film Festing continues … I am no fanwhore like my dear friend, willariah, but I am enjoying the flicks I’ve picked thus far. Though, I must say, I’m still waiting for a film that provides me the ‘wow factor’. I saw one last night, and three today!  So, onto the movies:

Renaissance
Christian Volckman, another virgin director, shot this fascinating film set in the Paris of 2054. Ironically, Paris is run by Avalon, a huge cosmetics conglomeration. Think Sephora but bigger and much more evil. Their key scientist, Ilona, has disappeared and the company hires cop extraordinarie, Barthelemy Karas, to find her before the secret she knows (the secret to immortality) is leaked out. Sounds like a comic book plot I know. Features the voices of Jonathan Pryce, Ian Holm and Catherine McCormack and music by Canadian, Nicholas Dodd. Volckman and Dodd were on hand to introduce what is surely one of the most unique film noir visions ever set to film. Stunning! My rating: 9 out of 10. 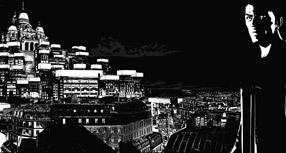 The Bubble
Another gay-themed film by Israeli, Eytan Fox (previously did Walk on Water and Yossi & Yagger). This outing pits the gay theme with a touch of taboo politicaliness (predictable I might be tempted to say) when gay Israeli Noam brings home a gay Palestinian, Asraf. More predictable woe and grief ensue as these two try to make their relationship work outside ‘the bubble’ that is city life in Tel Aviv. This movie is very good … until the last 7 minutes or so when we’re supposed to believe (spoiler alert) that 1) Asraf suddenly decides to leave his moderate views on the occupation behind and opts to become a suicide bomber to avenge his dead sister, and,  2) when he does blow himself up (while cornily hugging Noam outside the restaurant in Tel Aviv where they worked) enough of their bodies remain to be bagged center stage for the camera to focus on. Com’on!  Such potential only to be ruined in the last few minutes. My rating: 5 out of 10. 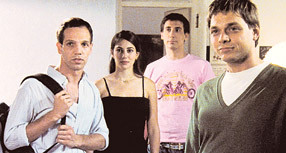 I Don’t Want to Sleep Alone
Tsai Ming-liang directed this ever-so-quiet, minimalist film. I don’t know where to even start to explain it. Essentially, it is about a a migrant worker, Haiso-kang, who after being beaten up is rescued by a Bangladeshi worker, Rawang, and nurtured back to health. On the way, he consorts with Rawang, Chyi (a waitress he meets) and Chyi’s female boss. This is a ‘difficult’ film to watch because it is so quiet. Haiso-kang, the main character, does not utter a single word the entire film (unless you count moans during sex). It is an existentialism tome played out on film. These characters are all reaching out to grasp someone and none want to sleep alone. My rating 6 out of 10. 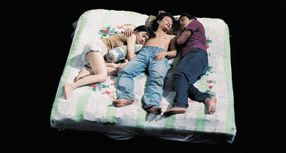 Bliss
Sheng Zhimin’s second big film after Two Hearts follows the story of Lao Li as he tries to find the perfect spot for his wife’s ashes and hold his family (older son, Jianjue; troublemaking step-son, Lei; and second wife Xiue) together. This is a beautifully shot and directed film with every image, bang-on. The characters are immediately real and you connect with them as they wander their way through the fog city, Chongqing. I loved this film and its story of loss, regret and loss. Up till the last 2 minutes. Did Sheng simply get tired of their stories I wonder? Did the money run out? The ending suddenly appears and is unfulfilling. My rating: 7 out of 10. 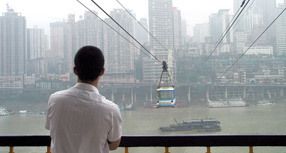 Wednesday’s fashion event: The Bay‘s Belle Fall Launch
G and I joined the Desperate Housewives set tonight for lots of free drinks (yummy martinis and terrible red wine) and appetizers at the Bay Dundas for a fashion show on what’s hot come this fall … for the ladies. Bottomline, the 80s are coming back girls! So, if there’s any cross-dressers in your house, take note! 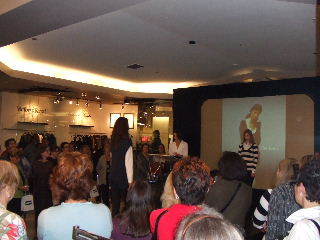