An Ode to Tanya
On Tuesday I met up with my dear friend, the oh-so-gorgeous Tanya for a drink. Tanya and I go waaaaaaaay back. So far back, in fact, that I taught Tanya swimming lessons when she was seven years old. As a teenager I hired her to work for me as we opened the Milton Leisure Centre. She jokes, quite rightly, that every job she’s ever got was my doing. Tanya, it’s my pleasure as you’re brilliant! Years after I left the oversee-leisure-centre-start-ups-world, I met her for drinks in Milton and suggested she apply for a position with the world’s largest humanitarian organization (where I was working at the time). She did and landed the job. She is their Director of Public Affairs and advises hundreds of folks and the powers-to-be on how do things right when it comes to messaging and the power of political positioning in the big bucks world of international humanitarian aid and response. I’m so proud of her!

Adam & Steve
Watched this 2005 effort last night with G. This film was written, directed and stars Chris Chester. As a meaningless aside here, I always worry (and am wary) of films where one individual directs, stars, writes, produces, etc a film themselves. I think, uh oh, this person is on a mission and ‘thinks’ they have something important to say. That aside aside, Adam & Steve tells the story of, well, Adam & Steve, two gay guys who have a disastrous one nighter in the 1980s only to reunite years later unaware they met years previous. Got all this so far? …. Adam is a recovering substance abuser; Steve a psychiatrist. Needless to say they hit it off, and, after the hickup of realizing they met years previous, get married and – presumably – live happily ever after. The amazing Parker Posey also stars as Rhonda, a very bad stand-up comedian who ends up dating Steve’s roommate Michael. The film is fun and campy with some great laughs and scenes (line dancing aside [rolls eyes]) and has a refreshing gay positive feel. While it certainly ain’t Oscar material, it did for me dispel the thing I had for films directed, produced, starring etc one individual. For that, my rating 6 out of 10. 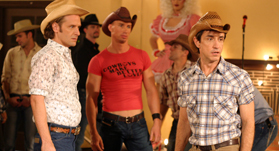 Oscar Dinner 2007
Preparations for the Oscar Dinner 2007 are officially well underway. You can see the menu from 2005 here and the menu and pictures from the scrumptious meal from 2006 here. The premise: take each of the 5 Best Picture nominated movies as the inspiration for creating 5 unique courses. Match each course with a wine and voila, you’ve an Oscar-inspired dinner.