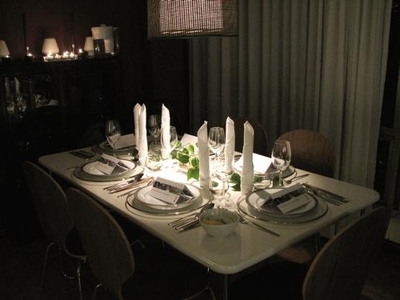 Last Saturday night we hosted this year’s Oscar Dinner. It was a wonderful evening with 5 hours of casual fine dinning. Joining us this year were Blee, Tennis Star Suzie, willariah and Laura.

While the Oscar dinner is A LOT of work, we do enjoy putting it on each year. Blee, as always, was a godsend in helping out (even while sick!). Thanks Blee!  The Oscar Dinner is also a made-from-scratch job with each course handmade from scratch (i.e., if the recipe calls for a cup of chicken stock, we make the chicken stock first from scratch). It is truly a labour of foodie love. So, onto the meal …. 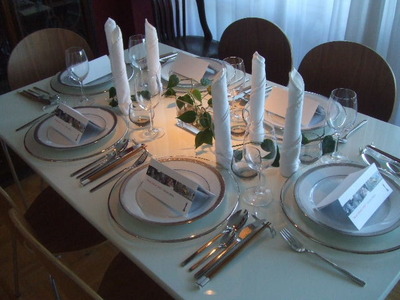 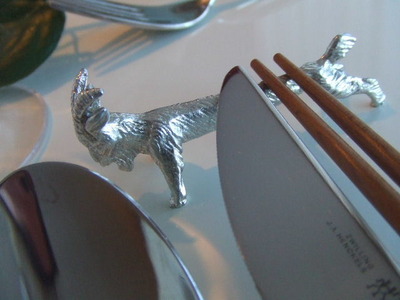 1) the table awaits its guests; 2) closeup of the very funky knife rests we bought in Quebec City last May … each one is different

The dinner menu G and I created is below along with pictures of the courses. Click on the menu to blow it up. 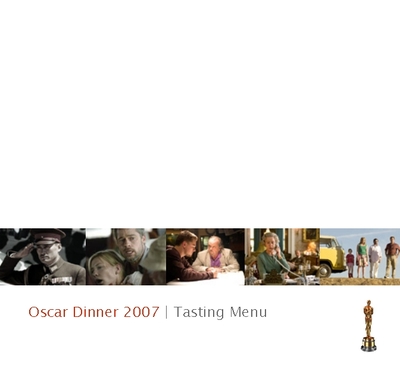 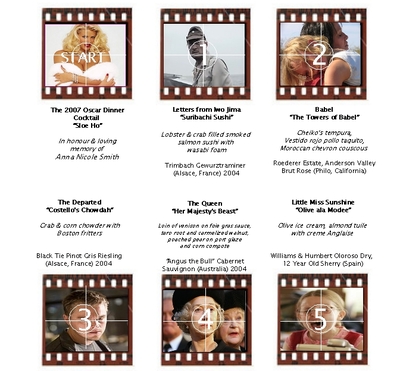 This drink was a combination of sloe gin, lemon juice, simple syrup and club soda and was served with two rambutans as Anna Nicole’s breasts. 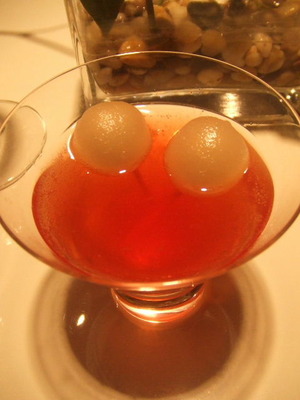 The idea here was sushi seafood to honour Japan and the veterans of Iwo Jima. The black sesames play homage to the black sands of Iwo Jima. One sushi roll was stuffed with crab; the other lobster. Both with a core of mango and held together with Japanese mayo (which took us three attempts to get right!). This was served with a rice wine vinaigrette and a wasabi foam. An excellent appetizer. This recipe was courtesy Rob Feenie and was one courses he served when he won Iron Chef America! Thanks Rob! 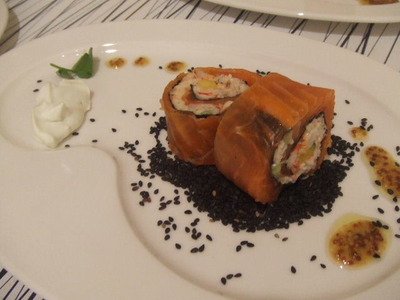 The concept we took here was to ‘tower’ the food we chose. One food for each of the themes in the film. A simple tempura (which I did out on the balcony last minute … boy was it chilly out there) to honour the Japanese line of the movie. A chicken lime taquito to honour the Mexican themes in the movie. A Moroccan goat (yes, we made and ate goat) couscous to honour the main story line of the movie. The wine pairing, a Californian sparkling, gives a nod to the main characters home in San Diego. Oh, and that green stuff is homemade parsley oil! The taquitos were freaking devine! 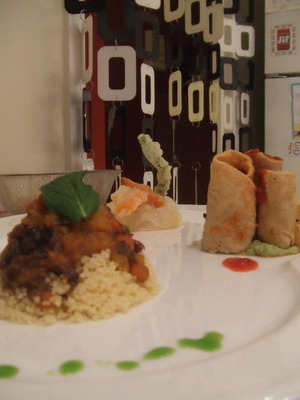 To cleanse our palette before the delicate and light and subtle chowder, we offered up a homemade blood orange granita that was to-die for. Served in an ice cup, we drank a potato vodka from the cups afterwards which was delicious. 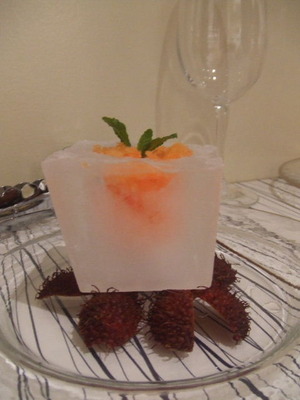 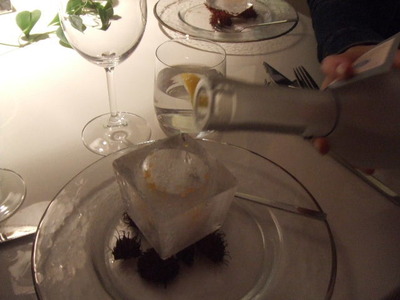 To honour Jack Nicholson and his movie, we chose a corn chowder with Boston crab fritters finished off with some creme fresh. This was simply outstanding … warm, luscious and subtle. It was my favourite. The fritters were made almost like a meringue (with very little flour and folded in eggs whites) and we were worried as I went to deepfry them if it would hold together. They worked fine and made for a superb and light accompaniment to the chowder. 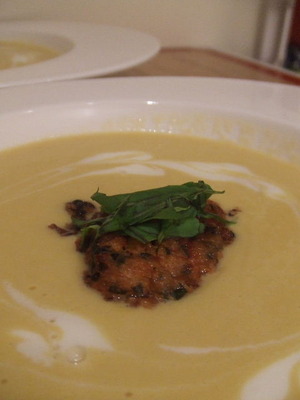 Of course for The Queen, we needed something over-the-top regal and what better than this absolutely stunning plate, courtesy Susur Lee. We chose elk (yes, elk) to honour the moment in the movie where the Queen, her Land Rover broken down in the river, sits, (we presume) crys and sees the majestic elk on the hilltop.

For those Torontonians who know, Susur is THE restaurant in the City. Susur’s recipes are unbelievably complex and complicated and take (for us at least) days of prep. Only the Rubino brothers come close to what Susur is doing. He is ahead of the curve by a century when it comes to food.

The foie gras sauce we made started two weeks ago as 12 cups of dark stock,  and, when we finished Saturday night, was reduced to one cup of pure foie gras/butter/demiglace nectar. OMG wonderful. The elk we seared then roasted for 12 minutes. It was utter perfection on the plate; so tender you could have used your thumb to cut it. 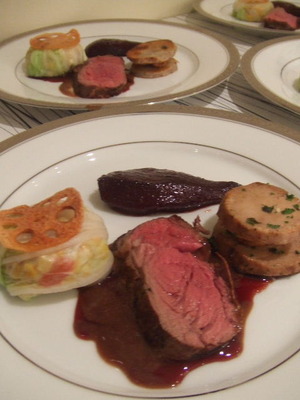 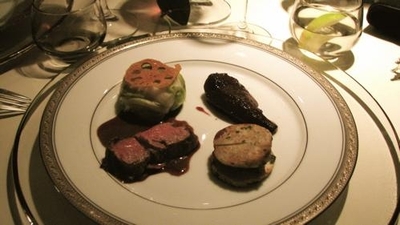 As soon as we saw this movie we knew what to serve. Ice cream. Homemade ice cream. And, with a nod to Charlie Trotter whom we visited in Chicago last year, opted to try and make olive (yes olive) ice cream. Now, this did take two attempts. We followed a recipe the first time out and we’re not happy with the results so went free hand the second time and came up with a winner. We made a pulse of green and black olives and steeped it in cream before adding in egg yolks, a little sugar and vanilla to create the ice cream. It worked well I think. Blee made up little crown-shaped almond tuiles to finish off this dish and G made a creme Anglaise which added just enough sweetness to score a winner. That said, the sherry did not match well here … port or an ice wine would have been better. 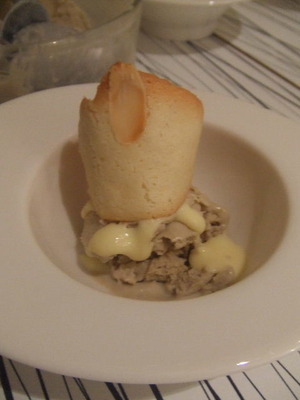 If history holds true, one of the six who attended will be moving out West this year. Each year we’ve hosted, one person who attends ends up going west … I wonder who it will be this year? …. Oscar Dinner 2006 can be found here.