I spent Wednesday and Thursday up in Antigonish, Nova Scotia, which is the highland heartland of Cape Breton. It’s a wee speck of a town with a population of about 6,000 souls and is probably most famously known as the home of one of Canada’s top rated liberal arts universities, St. Francis Xavier. 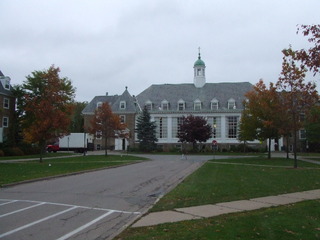 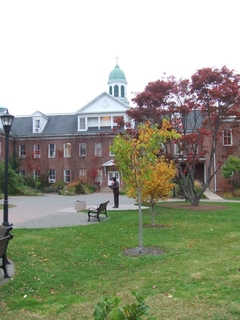 We had a lovely meal downtown Wednesday night at Alcove Bistro & Lounge, complete with local ale and an asian stirfry with gobs of maritime seafood. That night, we headed to the Empire Theatre right on Main Street and saw, The Kingdom (see review below). 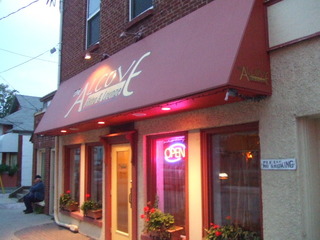 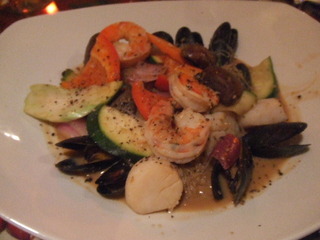 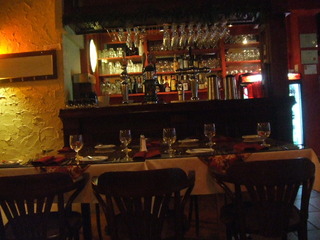 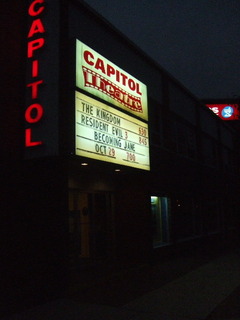 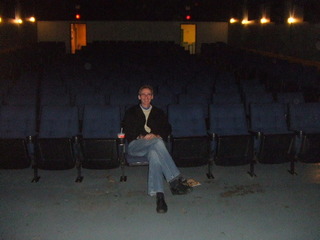 6) the Capitol on Main Street, Antigonish; 7) me in the VERY empty theatre! 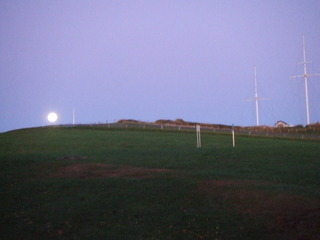 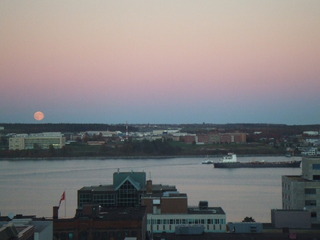 8) the moon sets over the Citadel in Halifax on Wednesday morning; 9) the moon rises from my hotel window in overlooking Halifax Harbour on Friday night

I hate being away an entire week and it was uber-wonderful to get home Saturday night and sleep in my own bed with G alongside me.

The Kingdom
Directed by Peter Berg and starring Jamie Foxx, Jennifer Garner, a brilliant Chris Cooper, and a mushy, whiny, aggravating Jason Bateman, The Kingdom is a timely, terrorist thriller. The opening sets the scene as an American worker compound in Riyadh is brutally attacked by a group of terrorists. Foxx, playing special FBI agent Ronald Fleury, maneuvers the American and Saudi political systems to get himself and three others flown to Riyadh to investigate alongside the Saudi team. Once on the ground, the FBI team is stifled in their ability to investigate due to the machinations of Saudi pride, princes and politics. Things change when a sympathetic Saudi police captain joins their side, so to speak, and that’s when this movie kicks into overdrive. The five find themselves deep inside the terrorist neighbourhood, and then actually right inside the lead terrorist’s apartment building. The action, violence and suspense during this last quarter of the movie is relentless and brilliantly done. When it’s all over and – naturally – the Americans reign supreme, Berg ends the movie perfectly, mirroring FBI man Fleury’s words with the words of the granddaughter of the now dead terrorist leader. “We will kill them all”. And that, sadly, is what lies at the heart of the problem with our current war on terrorism – our goal whether ‘terrorist’ or ‘ally’ is the same. For its perfect ending and subtle comment on war, terrorism and violence, my rating 8 out of 10. 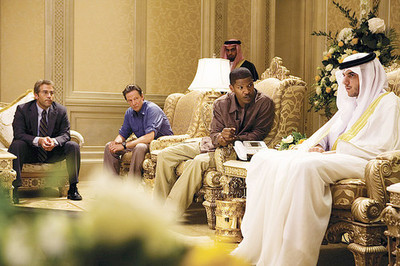