Mama Mia
Pierce Brosnan has no worries about preparing a speech for
Oscars this year. In Mama Mia, he demonstrates a classic example of a (good?) actor
utterly out of his depth. He is wooden, uncomfortable, and – yikes –
even sings … horribly granted, but he does give it a screechy try. Based
on the music of ABBA and a direct steal from the Broadway theatre production
that won umpteen Tonys, the movie version illustrates, vividly, that not all
Broadway shows can translate to the silver screen. This is no Chicago. Meryl Streep does a fine job as the
woman, Donna, who doesn’t know which of three men fathered her daughter
Sophie. Her two sidekicks – Julie Waters (as Rosie) and Christine
Baranski (as Tanya) are particularly good, Baranski especially. Newcomer Amanda
Seyfried plays the girl at the centre of the story. If you are not a fan of
ABBA or the theatre version of Mama Mia, avoid this movie like the plague. I am
a fan of both but would still only give this lame, absurd movie my rating of 4 out of 10.

National Treasure: Book of Secrets
The usual suspects gather in this second, poorer, version of
the box office hit from 2004. Nicholas Cage is back as cagey historian Ben
Gates, Diane Kruger returns as his (now) wife Abigail Chase, Jon Voight is back
and just as aggravating as ever as dad, Patrick Gates, and sidekick Riley Poole
(Justin Bartha) returns to continue to add some comic interest. New to the
adventure are the ever brilliant Ed Harris as bad guy, Mitch Wilkinson, and the
ever brilliant Helen Mirren as Ben’s mom, Emily Appleton. The story is an
over-the-top silly concoction concerning the assassination of Abraham Lincoln;
a secret book passed from President to President that reveals the truth about
some of history’s greatest events, and a secret city of gold hidden away
by Mt. Rushmore. It is all thoroughly dumb and
sadly does no justice to the brilliance that was the first National Treasure
movie. It is all way too much and as such leaves the viewer bored as the chase
unfolds. My rating 4 out of 10.

I, Robot
You can’t often go wrong with movies based on great
books and I, Robot proves this point. Based on Isaac Asimov’s story of a
robot with a conscious it is directed by Alex Proyas and stars the ever wooden
Will Smith. Yet even Smith’s performance as Detective Del Spooner fails
to derail the film. The movie’s strength lies in its storyline of robots
who think – sometimes – in order to protector their creators they
have to supersede their programming and break the ethical laws humans have written
into them. It is a great premise and the detective story that results when the
robots’ creator, a scientist named Dr. Albert Lanning, is found murdered
is a great ride. Full of action, philosophy and some great special effects, I
Robot works to show us the err of our ways and the dangers that may eventual result
when robots attain a consciousness similar to our own. My rating 7 out of 10.

Yellow Sticky Notes
Canadian Jeff Chiba Stearns wrote and animated this short
6-minute story of his life – thus far – using the ubiquitous yellow
sticky notes we’re all oh-so-familiar with. Motivated by the realization
that his film-making journey and to-do lists of yellow sticky notes had
overtaken his life, Stearns uses the same medium as a means to self-reflect on
events since 9/11. This short piece is a joy to watch with more revealed with
each viewing of the some 2300 sticky notes. The catchy original soundtrack is
courtesy Genevieve Vincent. My rating for a great idea captured in an experimental
and fun fashion 8 out of 10. 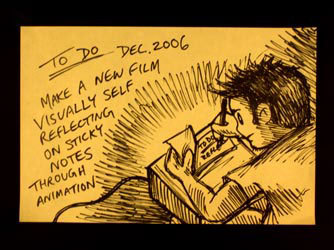