For many years I have chatted with J, a mainland chinese english teacher who works way up in the northern most Chinese province, Heilongjiang, which borders both Russia and North Korea. J and I met on Xanga when he or I stumbled on each other’s blogs. Sadly, with thanks to the Chinese government censors, J’s access to Xanga for posts was sporadic at best. Instead we resorted to the old fashioned way of doing things: email. He would email asking for advice on the english language, suggestions on how to teach this or that topic to his pupils, and answers to grammatical conumdrums I’d not vetted since my days working as an editor and english as a second language instructor. Yes, that’s another of my weird and wonderful certifications. J was supposed to head to the United States 2 years ago, but things fell apart due to his headmaster not wanting him to go. That sort of stuff still happens. So to my sheer surprise and delight, I discovered J was heading to Canada for a three week english course at UBC with 30-odd other specially chosen teachers from Heilongjiang province, followed by a week of cultural touring to none other than Montreal, Ottawa, Kingston and yes, Toronto.

He arrived late on Tuesday night and on Wednesday I trekked up to the wilds of Thornhill to meet him at his hotel as the tour bus rolled in. It was a delight to finally meet J after so many years of email. We spent a far too short hour and half riddling each other with questions before taking our adieus.

I know J you will find a way to read this post at somepoint and I want to say what a pleasure it was to meet you and continue what I am sure will be a long friendship. My apologies again for not being able to find a store with maple candy, but we’ll find some and get it couriered to you for the kids soon. And thanks for the slippers! 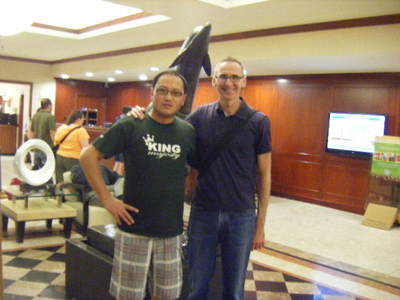 J and moi in the lobby of the Holiday Inn