I’ve been working hard. Rare for me, I fully admit. Work tends to be that silly, inconsequential thing I do between writing movie reviews and drinking champagne.

I’ve been full bore since Christmas working with Tourism Toronto on a proposal to host the XX World Congress on XXXXXXX (names removed for obvious reasons) here in Toronto in 20XX. This Congress only happens once every four years. The bid book is looking damn fine I must say and I’ve recruited several key North American representatives of the work I do to sit on a steering committee that will construct the Congress once we win the bid. These representatives are key as I believe the very small group of somewhat secretive folks who make up the Association (based in Europe) who ultimately decide the winner will be swayed by our collaborative approach.

We go to print on the bid books Friday so they can be couriered to XXXX (European capital city name removed) by the deadline next week.

And so, to some movies….

Walk The Line
James Mangold directs this excellent biography of country music singer, Johnny Cash, from his early years down south on a cotton farm in Arkansas to his famous concert at Fulsome Prison in 1968, which reinvented him. Joaquin Phoenix (pre-craziness) does an outstanding job as Cash while Reese Witherspoon stars as (and won an Oscar for playing) June Carter. During the two hours, we see a Johnny Cash I certainly didn’t know existed: the second son of a resentful father, the two-timing husband who ignores his wife as he pursues – relentlessly – June Carter on and off the many stages they graced, and the young star who slides inevitably into the Rock Star illness of booze and drugs. While Walk the Line toes the predicable line of every biography in its delivery, it is saved thanks to the performances of Witherspoon, Phoenix and Ginnifer Goodwin (as Cash’s first wife, Vivian). And damn, the music is might fine to boot. My rating 8 out of 10. 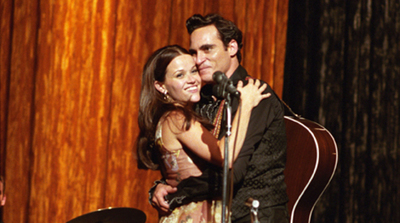 Up
A perfectly uplifting film on every level with a thoroughly rich animation that is, in a word, stunning. Up, directed by Pete Docter and Bob Peterson, stars Ed Asner (as voice of Carl Fredricksen), the widowed crudmudgeon who sets out – his house in tow via a collection of balloons – to honour a promise he made to his wife, and Jordan Nagai (the voice of  Russell), the honest Cub Scout whose out to help him in order to earn his ‘help the elderly’ badge. The strength of Up is firmly rooted in its perfect story; a story as good as you’re likely to see on film in some years. The fable that is released is tragic and heart-stoppingly romantic, fun and action filmed. Up sets a new America standard for animation that rivals the intricacies woven by Hayao Miyazaki and should not be missed. My rating 10 out 10.

Sahara
Based on the 1992 novel by Clive Cussler of the same name, Sahara is a movie trying to be too many things: historical treasure hunt; comedy; romance; environmental thriller. The result is a complete hash-up where everyone seems lost as to what acting role they are supposed to take: one minute Arnold Schwarzenegger; the next Meryl Streep in Out of Africa. Blame director Breck Einser and shame on Penelope Cruz (as a sort of Lara Croft-lite) and Matthew McConaughey (as a sort of Indiana Jones-lite) for not putting things right. Only William H. Macy (as the Admiral) and Lambert Wilson (as bad guy Yves Massarde) seem to have come prepared fully understanding their role. More the  shame as there is great potential in the story with its undertone of American involvement in the Sahara (and civil wars) and our panache as citizens to turn a blind eye to environmental disaster in the name of financial profit that ring very true. While the action scenes are full-on fun, best to skip this whirlwind of a mess in a Saharan teapot and read the book. My rating 4 out of 10. 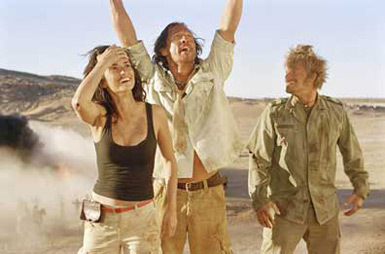 4 Responses to The Proposal