It arrives in a week …

… and their hanger-ons all descend on our fair city to watch World Cup Soccer for the weekend!

What’s worse, downtown Toronto has been turned into an armed camp complete with barricades reminiscent of a Mad Max movie around the main downtown core.

And what’s worse of worse, we – as Canadians – are paying for this ridiculousness to the tune of $2 billion dollars. Yes, that’s a “b” for Billion.

Wrong, wrong, wrong. Have these folks not heard of Microsoft Live Online meetings?!

Who to blame? Well, that’s simple … place all the blame on that conservative prig we have as prime minister, Stephen Harper. Remember this fiasco next time you vote!

So what to do?… Flee? … Head out and join the tens of thousands of protestors already massing here?

Nah, I think I’ll hunker down and watch movies instead.

If you are heading out, here’s a map of where to avoid.

Terminator Salvation
Directed by Joseph McGinty Nichol (aka McG), Terminator Salvation is a very good action film that lacks soul. Well acted by Christian Bale (as John Connor) and Sam Wotherington (as Marcus Wright) and with an engaging story that continues to weave the past/future of our hero, John Connor, the film works well as a visual smorgasbord. Sadly, that power is lost as the emotional bits ring hollow since they are so dreadfully blatant, and as such, carry no meaningful impact. Smaller roles by Helena Bonham Carter as the evil Dr. Serena Kogan and the always cliched Michael Ironside as General Ashdown add a campy factor to the film that really works. Terminator Salvation is a furiously fun film, and while soulless, gets my rating of 8 out of 10. 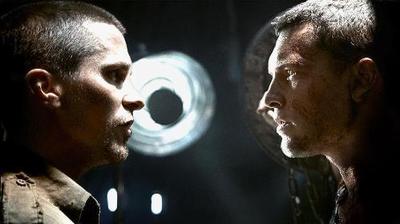 The Proposal is one of those films a reviewer drags their feet to attend expecting to detest it immensely as trite, formulaic, and tiresome. So, gosh, what a surprise seeing it – lesson learned. Starring Sandra Bullock as Margaret Tate, a dragon-lady book editor in the Devil Wears Prada-mold and Ryan Reynolds as her much hackneyed executive assistant, Andrew Paxton. When the dragon-lady is faced with deportation due to a citizenship glitch, she browbeats Andrew in agreeing to marry her … in Alaska. Toss in a Department of State bureaucrat bent on proving it’s all a farce marriage; Andrew’s parents, Grace (the always wonderful Mary Steenburgen) and Joe (Craig T. Nelson) and Andrew’s free-wheeling grandmother, Annie (Betty White) and you have a pretty wonky, and hilarious, two hours of nuptial zaniness. Directed, perfectly, by Anne Fletcher and with a nod to Pete Chairelli’s great writing, The Proposal is worth  a walk down the aisle. My rating 9 out of 10.

Adventureland
Director Greg Mottola seemed to believe a movie about his teenage adventures at an amusement park would make a good film. Unfortunately translating his recollections to the screen leaves this reviewer bored senseless. Jesse Einsenberg plays James, a kid with artsy aspirations to visit Europe before starting college that go awry when his dad is demoted and James is forced to cancel the trip to work as a game attendant at Adventureland. There he meets the love of his life Em (Kristen Stewart) and an assortment of circus freaks he calls friends. The acting is solid but the vibe is all wrong as the film struggles to decide if it is trying to be a comedy or drama (it falls woefully flat on both fronts). To use the film’s own tag line to sum-up, “It was the worse job film they ever imagined”. Avoid. My rating 0 out of 10.

Domino
Based on a true story that is truly unbelievable, Domino recounts – granted loosely – the story of Dominio Harvey, a near-do-well lass from England who tossed aside her silver spoon upbringing and modeling career to become a bounty hunter. Keira Knightley stars as Domino and Mickey Rourke in his pre-The Wrestler days (though you can see the seeding of that character here) is Ed Moseby, Domino’s bounty hunter boos. A host of stars play minor roles in this wonky tale that’s so far-fetched it works, including: Jacqueline Bisset, Dabney Coleman; Macy Gray; Mo’Nique; and Brian Austin Green even. While the story is a shamble, what makes this film work is its style. Directed by Tony Scott, it is a collage of images and song that play like an MTV video. While decidedly not for everyone – Domino is a film you’re going to hate or love, no middle ground – its tongue-in-cheek campiness and totally off kilter approach was both refreshing and fun. My rating 8 out of 10.