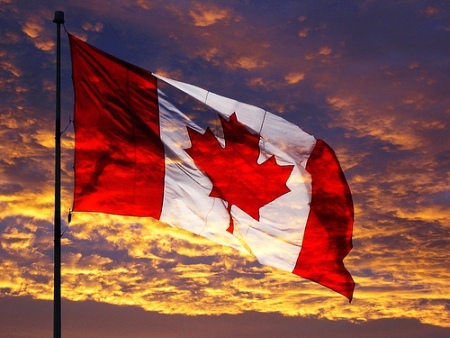 After the misadventure of Saturday and Sunday in Toronto when the G20 was in town and all hell broke loose (see the Boston Globe’s great “The Big Picture” photo site here for the pictures), it is nice to be back in the Toronto I know to celebrate our 143rd Birthday as a Nation – true, strong and free!

To celebrate, we all headed down to The Sultan’s Tent last night to celebrate with too much Moroccan food and some belly dancing. It was good fun! 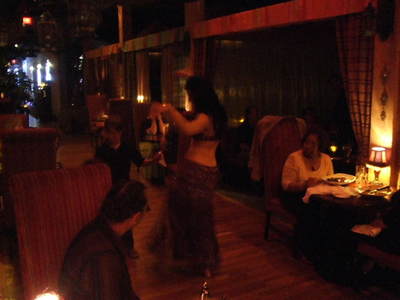 1) our belly dancer even got the kids up and dancing

As Toronto burned last weekend, I settled down to watch some films, including:

Taking WoodstockAng Lee directs his take on the behind-the-scenes story of the family that made Woodstock happen – the Tibers. Centre stage is Elliot Tiber (Demetri Martin), the gay son of Jake and Sonia who returns from his career in New York City to offer the Woodstock organizers his town, tiny Bethel, NY, as ground zero for the hippie invasion. While you never see the concert, you do hear it, and there are shots reminiscent of Michael Wadleigh’s classic 1970 film, Woodstock. Sadly amid all the noise there are but two standout performances – kudos to Imelda Staunton who works wonders as Elliot’s over-the-top-Jewish-mother-from-hell, Sonia; and Liev Schreiber as Elliot’s ex-marine transvestite chief of security, Vilma. Highbrow reviewers will claim anyone not liking this film ‘didn’t get it’. Wrong; Ang Lee needs to try a toke or three on some weed and to learn to be less crafted in his film-making. Taking Woodstock is an exceptionally well made film, yes, but it completely lacks any vibe or heart and is about as groovy as watching paint dry. A depressingly slow and exceedingly boring ‘tribute’ to Woodstock, this soulless venture will make you glad you missed the concert. Avoid. My rating 2 out of 10.

When romantically challenged TV producer Abby Richter (Katherine Heigl) saves her morning show by agreeing to hire  sexist radio show host, Mike Chadaway (Gerard Butler) she gets more than she expected. Chadaway’s take on love reflects the ugly truth that men are scum and driven solely by sex; something Abby cannot abide. Enter Colin (Eric Winter), the proverbial ‘man of her dreams‘. Mike agrees to lend Abby a hand in wooing Colin in exchange for peace on the morning show set. Naturally, what ensues is Abby’s realization that Colin is like everyman while Mike realizes he may have to tinker with his own self-perception as he falls in love with Abby. It’s all a “been-there-seen-that” sort of film. The Ugly Truth is silly and funny (witness Abby’s restaurant scene with electric panties on!), but that’s it. Capable actors hit all their lines here but with cliche after cliche The Ugly Truth is a little hard to swallow. My rating 6 out of 10.

Black
Black is an overacted ripoff of The Miracle Worker with a Bollywood bent. As such, it’s worth a watch because – come on – when are you ever going to have that sort of a wonky mix? Better still, director Sanjay Leela Bhansali opts to mix pretentious English lines freely amid the Hindi. It’s a wondrously strange brew and this reviewer had visions of Lilies dancing his head, almost as if Bhansali had initially conceived his film as a theatre piece. Frankly, the ripoff aside, the ‘look’ of this film is stunning. Amid the weirdness Amitabh Bachchan does a fine – if Malkovichian – job as ‘Miracle Worker’ Debraj Sahai to Helen Keller’s Indian doppelganger Michelle McNally (Rani Mukherjee). Black won a slew of Awards of the International Indian Film Academy back in 2006 and is such a bizarre mix of styles and so overwrought it’s well worth renting on a lazy Sunday afternoon. My rating 7 out of 10.

Crank 2 – High Voltage
Crank 2 is yet another fine example of why filmmakers should not make sequels. The first Crank film – while brutally violent to its core – was stupid enough to walk the fine line of farce. In this latest venture, our star Chev Chelois (Jason Statham) has his – wait for it now – heart cut out and given to a Chinese triad boss. With a mechanical ticker in its place, Chev roams a stylized Los Angeles to get it back. While such silliness worked the first time around, Crank 2 while full of action yes, fails to engage as it’s truly just too nasty on every level imaginable. Wholly unwatchable – sadly – there is nothing redeemable about this film and Statham should be plain ashamed of himself. This film forgot its farce. My rating 0 out of 10. 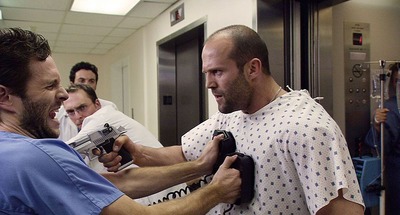