I had two ups in my life of late: about a month ago I climbed up the stairs inside the CN Tower as part of the Enbridge United Way Stair Climb. I’ve done this event many times in my time. It’s a grueling 1776 stairs up to the top. As I age, my time continues to rise but that’s just okay.

1) Rachel, moi and Regina pose after climbing to the top; 2) showing off our climbing times

For interest sake, the fastest lad up the Tower this year clocked in with an 11 minute something seconds time. Amazing! My challenge always seems to be negotiating the traffic of people – and passing them – climbing up.

This week I was up north near Collingwood for our annual National Team retreat at Blue Mountain. I am glad to say this year it did not snow. Meetings were good and we’re just so unbelievably busy with things in the business I can’t hardly keep up with all the excitement. 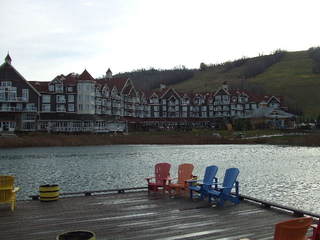 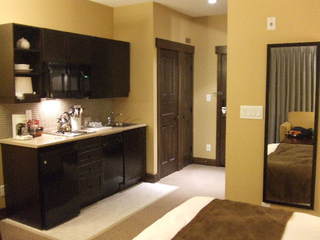 5) my room at Mosaic, which had a small kitchen and fireplace; 6) the Village was deserted 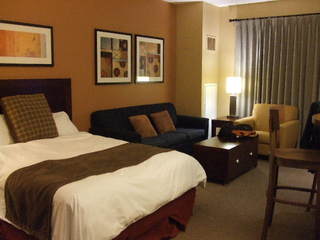 7) the bed (crummy) and seating area 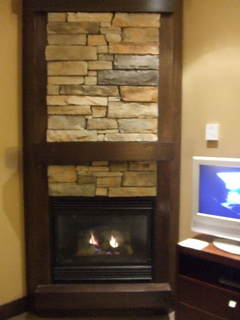 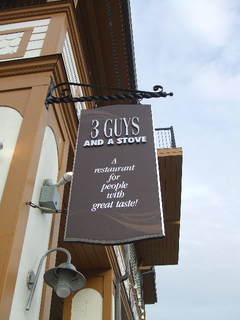 8) the fireplace; 9) Wednesday night we dinned at the noted 3 Guys and a Stove (which imho is woefully overpriced for the food they serve – I had an uninspiring Caesar salad and crabcakes – which ought to have been termed ‘crapcakes’ with a rice pilaf that was just plain poor; though kudos to the barbecue seafood sauce (very different)

The World of Suzie Wong
Richard Quine directed the film version of Richard Mason’s novel (later a stage play) – the World of Suzie Wong. Premiered way back in 1960, it was a daring film for its time. The overt negative stereotyping of Asians aside, William Holden as Robert Lomax, the architect who escapes America to find his artistic soul in Hong Kong, and a so young Nancy Qwan as Suzie Wong, the prostitute who captures his eye, do a fine job as two misfits in their own worlds drawn, inexplicably, together. While Holden is too old (or Qwan too young) to make the love story really work, the film is worth a watch for its comedy; the wonderful scenes of a Hong Kong that no longer exists; and for boldly – yet compassionately – portraying an inter-racial relationship to a world ill-equipped to face it. My rating 7 out of 10.

The Twilight Saga: New Moon
Based on the wildly popular and poorly written trilogy, New Moon gives us part two of Stephanie Meyer’s Twilight Saga. Directed by Chris Weitz, all the regulars return including Bella (Kirsten Stewart), deathly white Edward (Robert Pattinson) and the now-realized-I’m-a-werewolf Jacob Black (Taylor Lautner). New Moon has all the lads beefed up to heighten the sex appeal and get the legions of lovelorn lasses who pant after them all hot and bothered. Sadly in doing so, everyone forgot how to act and that for these films to work, a little action is required. Painfully boring and interminably never-ending, this woeful effort has neither bark nor bite and is barely worth my rating of 2 out of 10.

Paranormal Activity
This Blair Witch riff takes us into the house of Micah (Micah Sloat) and Katie (Katie Featherstone). Katie it seems is pestered by a demon that house hops with her and is, or maybe isn’t, connected to a long line of families that have ended up bloodied on the five o’clock news. Ever resourceful Micah uses a video camera to film – over an interminable 23 days – the slamming of doors, appearance of footsteps, swinging of chandeliers, and general mischievousness the demon gets up to while they sleep. It’s all about as horrifying as cutting cutting your toenails.  Directed and written by Oren Peli, this is a thoroughly miserable movie experience and is laugh-out-loud laughable from start to finish. My rating 0 out of 10. 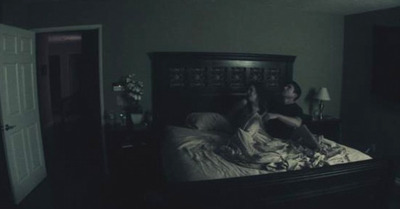 Born Into Brothels: Calcutta’s Red Light Kids
A documentary made by Zana Briski and Ross Kauffman, Born Into Brothels takes us into Calcutta’s red light district to meet the children of the dangerous streets’ prostitutes. Lower than the low, these children are all but invisible to Indian society and organizations. Deemed so low in fact, that neither government officials nor schools wish to take them on. But Zana brings photography to their lives, setting the kids up cameras, classes on how to use them and then weekly sessions to critique the photographs of the world they inhabit. The kids, of course, excel in the art and soon Zana conceives a plan to hold a photographic exhibition of their work to help fund their escape from the ghettos they inhabit. Beautiful illustrating a story we all should be aware of, Born Into Brothels is shows us both the resiliency of children and the potential that lies within all, regardless of their birth. My rating 8 out of 10.

L’enfant
Brothers Jean-Pierre and Luc Dardenne wrote and directed this film. L’enfant won the Palme d’Or at Cannes in 2005, a fact utterly lost on this reviewer as the film is relentlessly dull, sour and worse, unbelievable despite its denouement.  When a 20-year-old streetwise petty thief Bruno (played by a 40-year-old looking Jeremie Renier) opts to sell his newborn baby without the permission of his streetwise girlfriend Sonia (Deborah Francois), you can imagine all heck breaks loose. Shot in the dreary Belgium town of Seraing L’enfant stumbles in that you see it all coming and worse, you just know Sonia is eventually going to cave in. Silly, silly girl. My rating 5 out of 10.

Lara Croft: Tomb Raider
Sure, it’s overwrought with layers of unbelievability that is staggering but you still have to love this film based on the popular video game series starring Angelina Jolie as Lara; her real-life papa Jon Voight as Lord Croft; a post-The Year My Voice Broke, Noah Taylor as geeky Bryce and a pre-Bond Daniel Craig as Lara’s love interest, tomb raider Alex West. Directed by Simon West, Tomb Raider is full of gusto and romping good fights and chases across several continents. Solid is a good way to frame both the acting and direction and the film put Angkor Wat on the map to boot. A good example of a movie that deserves its box office success despite the reviews some holier-than-thou critics bestowed during its premier. Watchable again and again, Tomb Raider gets my rating of 8 out of 10. 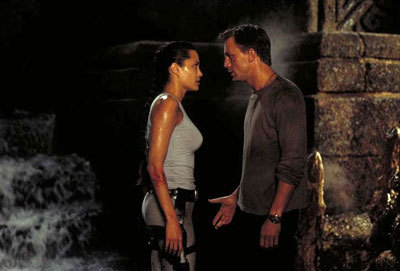