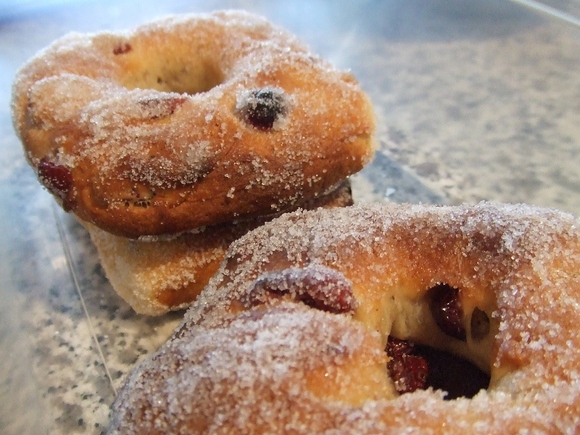 I stumbled upon a recipe months back for a turn-of-the-century doughnut that was not deep-fried and opted a couple weeks ago to finally tackle them. While the process is simple enough, the recipe called for three separate dough rises – totaling some 3 hours – so you’ll want to plan a day for these.

I opted to coat these in mixtures of sugar; cinnamon and sugar, and sugar/dried strawberries. Interestingly these looked so very heavy as I brought them out of the oven but they were decidedly light and fluffy. Yummy! 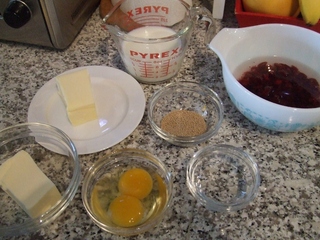 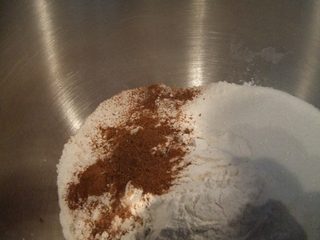 2) gather the ingredients; 3) prepare the dough 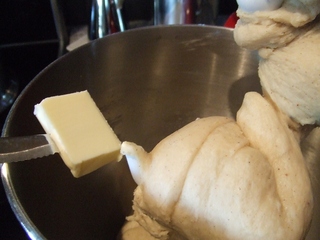 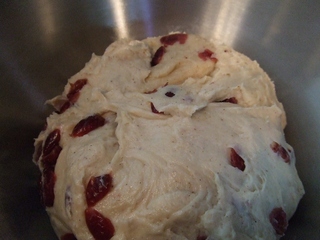 4) slowly beat in the butter a bit at a time; 5) add the cherries at the last moment 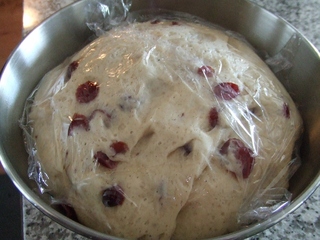 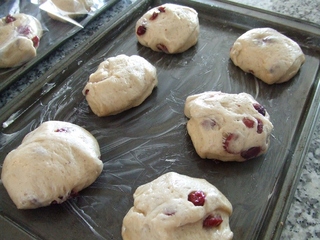 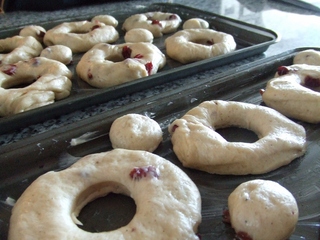 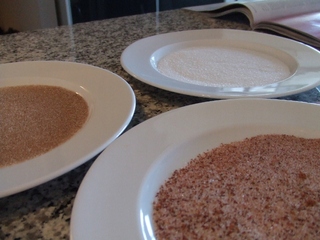 8) form into doughnuts and stamp out the holes (I was inpatient by this point and need to work on making good round doughnuts; 9) prepare your toppings: (top-bottom) sugar; cinnamon sugar and sugar strawberry 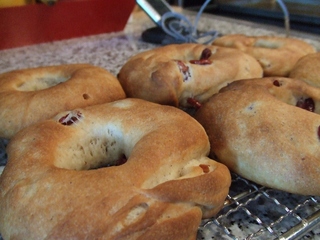 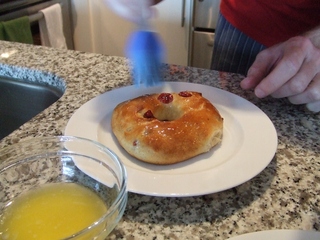 10) out of the oven – they are sort of like bagels; 11) butter the tops and dredge in the topping 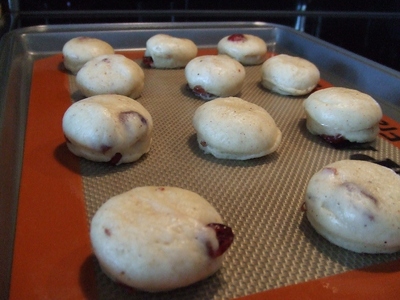 12) remember to bake the holes too … next time I’ll make all holes I think! 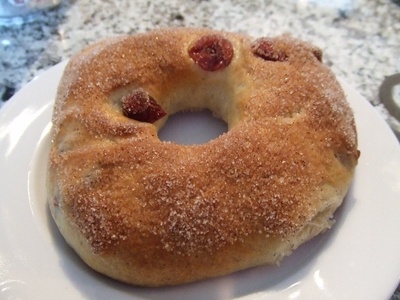 And seeing it’s Oscar time; here’s a stack of films I watched while en route to and in Vancouver last week and back again on Saturday.

127 Hours
Bully on James Franco for tackling a film where he is the center of attention from the get-go and responsible for carrying all the action. Bully on director Danny Boyle for detouring off the beaten path of Slumdog Millionaire to tackle the harrowing true-life story of Aron Ralston, who when trapped in a crevice in the Utah badlands opted to amputate his right arm rather than perish. A bold story coupled with bold acting in the hand(s)? of a bold director can produce a fine movie and 127 Hours is that and more. My rating 8 out of 10.

It`s Kind of a Funny Story
It’s kind of an odd story, what with a suicidal 16-yer-old checking himself into an adult psychiatric ward, but It’s Kind of a Funny Story is a good story too. Got that? Directed by Anna Boden and Ryan Fleck, the film follows Craig (Keir Gilchrist), a not untypical teenager as he wanders the ward of the unit meeting and befriending the patients in his search to fully understand he’s just like most teenagers confused by he feelings for a girl and unable to relate what he wants to be (artsy and creative) with his parents expectations. Central to the film is a great performance by  Zach Falifianakis as Bobby and Emma Roberts as Noelle, Craig’s soon-to-be girlfriend. While the film tackles the subject of mental health with a tongue-in-cheek humour that may lessen the severity of those individuals working their way through the maze that is brain health illness, It’s Kind of a Funny Story (dumb title aside) is both quaint and odd enough – in an indie film sort of style – to make you forgive this. My rating 7 out of 10. 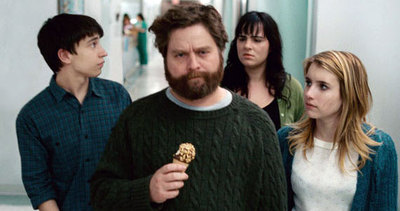 Inception
Easily the best film of this or any year, Christopher Nolan’s masterpiece is a Jungian’s wet dream of symbolism and one of the most deep films in the past half century. A marriage of past and present layered with a premise so interesting it ought to warrant its own research grant – that we can invade the subconscious and lay seeds that will eventually blossom into real-life actions. Inception stars Leonardo DiCaprio as Cobb (and who else does tortured soul better?) the leader of a group of professionals who parachute into the dreams of their targets. With him are sidekicks Arthur (Joseph Gordon-Levitt), Ariadne (Ellen Page) and paying client Saito (Ken Watanabe). When Cobb is hired by Saito to change the mind of the CEO of the world’s key energy company Robert Fischer (Cillian Murphy), he comes face-to-face with his own past and the wife, Mal (Marion Cotillard), he abandoned within a dream.  With a rich storyline that goes deeper and deeper as it evolves and special effects that brilliantly complement its brazen premise, Inception is the most refreshingly original movie you’ll see in long time. My rating 10 out of 10.

The Secret In Their Eyes
The Secret in Their Eyes won Best Foreign Film for Argentina in 2010. Skillfully directed by Juan Jose Campenella, there is nary  a misplaced scene. In fact what works best about this film is its quietness. A skill that continues to elude the majority of American directors. The film is a crime thriller with a retired legal counselor in 1999 choosing to write a book about an unsolved rape/murder case from 1974. Ricardo Darin stars as Benjamin Esposito, the counselor in question; Guillermo Francella is Pablo Sandoval his perpetually drunk colleague and Soledad Villamil is their boss, Irene Hastings.  When a recently married Lilana is raped and murdered Esposito is assigned to the case. From that assignment he builds a lifelong fascination with the case and its players, including Lilana’s husband Ricardo Morales (Pablo Rago). The Secret in Their Eyes is a bold film despite its quietness and the twists and turns you encounter viewing it are fabulously fodder for a psychiatrist. See it. My rating 9 out of 10.

Ironman 2
Robert Downey Jr returns – some six months later in time – as mega entrepreneur Tony Stark aka Iron Man. Now that he’s a successful deterrent to war, the US Army begins its work to militarize the Iron Man technology, much to Stark’s chargin. Sadly, Stark’s ticker continues to wane and new bad guy Whiplash (Mickey Rourke) proves the US military right when he shows up at the Monaco Grand Prix in a Iron Man-like suit and nearly does Stark in. Gwyneth Paltrow returns as Pepper – now Stark CEO – Potts and Lt. Col. James Rhodes (Don Cheadle) pulls double duty again tiptoeing between his military bosses and Stark. Stark’s new assistant Natalie (Scarlett Johansson) we discover is actually working for Nick Fury (Samuel L. Jackson) and when Justin Hammer (Sam Rockwell) hires Whiplash to work on a Hammer version of Ironman, all heck breaks loose. Directed by Jon Favreau, Ironman 2 continues all the great stuff discovered in the first movie and gives us a reason to like Ironman all over again. My rating 8 out of 10.

The Town
Charlestown on the outskirts of Boston births some of America’s most successful thieves. The Town is director  Ben Affleck’s story of one such group of armed robbers and, in particular, the attempt by one of this gang – Doug MacRay (Affleck) – to quit the neighbourhood’s business.  When Affleck and his crew rob a bank and end up taking the bank manager Claire (Rebecca Hull) hostage, it sets in motion a collision between him, his best friend James (an outstanding Jeremy Renner) and the law. Anxious to escape Charlestown and with FBI agent Frawley (John Hamm) in pursuit, Doug is forced to take one last job for the neighbourhood godfather, Fergie Colm (Pete Postlewaite).  The Town is an action filled tale woven tightly around the story’s four key characters and while it can be criticized for being unrealistic on a whole host of levels, the acting is fine enough, the action sharp enough to warrant a sojourn. My rating 7 out of 10. 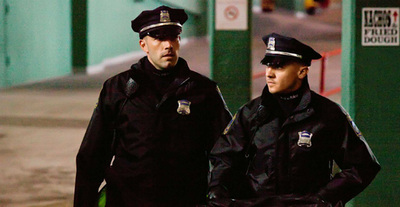 A film only a Canadian could love, Score: A Hockey Musical stars Noah Reid as Farley Gordon, a home-schooled lad with the hockey skills of The Great One. Recruited to the Brampton Blades for a tryout he soon makes the team much to the chagrin of Coach Donker (John Pyper-Ferguson). But when Farley is faced to fight, the pacifist  sentiment his parents – Hope and Edgar (Olivia Newton John and Marc Jordan respectively) – built into him has him at a crossroad. Directed by Michael McGowan and co-starring Alle MacDonald as Farley’s ‘I’ve-not-yet-discovered-I-love-her’ best friend Eve, Score is ramp with over-the-top silliness and some pretty awful singing too boot. But hey, it’s about hockey and features a few cameos by the likes of Walter Gretzky, Nelly Furtado, Evan Soloman, Theo Fleury and George Stroumboulopoulos, so it can’t be all bad, eh! My rating 4 out of 10. 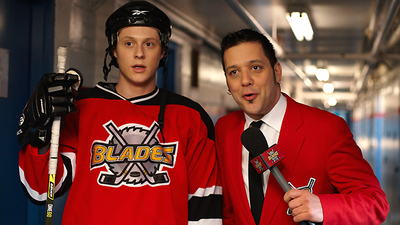 The Road
The Road is a post-apocalyptic story based on Cormac McCarthy’s novel that has a grungy looking Viggo Mortensen traipsing around an even grungier America. Viggo is looking for a safe place for he and his son, “Boy” (Kodi Smit-McPhee) as a new ice age settles on the continent and consumes the compassion that once knit  communities and people together.  Directed by John Hillcoat in hues of gray that match the relentless malaise and sadness of the story this is not a film to watch if you’re feeling out of sorts or depressed. While ultimately The Road is a story of hope and love, you are forced to suffer through lots of violence to get there.  Viggo is as good as ever but we’ve been down this road before. My rating  6 out of 10.