Christmas came a little early to the B&G Vancouver household. Yesterday we bought a set of the new All-Clad brushed stainless cookware with its d5 technology.

We hosted beer guru Barb and Darrin here on Friday night for dinner. It was a beer themed supper that included:

– Chanterelle (with thanks to CSI Carlee for bringing these back from Italy for us!) soup with bacon powder and beer (yes, beer) foam;

– a simple salad with an orange and ale vinaigrette;

Freaking fabulous! And finally trying to get some of the umpteen movie reviews I’ve back-logged up on the site.

Richard Donner directs the outstanding screenplay by none other than Steven Spielberg in this 1980s young-at-heart escapist adventure. When Mikey (Sean Austin) and big brother Brand’s (Josh Brolin) house is slated to be confiscated by an evil developer, the pair commence a search for pirate gold to find the money necessary to stave off foreclosure. The film is pure fun with a lightheartedness that is completely refreshing. The script weaves young romance, awkwardness, friendship, adventure and comedy perfectly. Two characters stand out and truly make the film – Chunk (Jeff Cohen) and of course, Mama Fratelli (Anne Ramsey). With Kerri Green (as Andy), Martha Plimpton (as Stef) and Jonathan Ke Quan (as Data), The Goonies remains a quintessential coming of age adventure that is a classic. My rating 9 out of 10.

Morning GloryThe marriage of Diane Keaton (as morning newshow host Colleen Peck) and Harrison Ford (as hardnews anchorman Mike Pomeroy) can’t ever be wrong and Morning Glory is no exception. Keaton is the longtime host who must adapt to Ford’s arrival on set as a crummondoey, serious political news hack with little patience for ‘lite’ news. The clash of egos is hilarious. Add into the mixture the young producer charged with making these two work together, Becky (Rachel MacAdams), her love interest Adam (Patrick Wilson) and the station’s bigwig President, Jerry (a very good Jeff Goldblum) and you will find yourself laughing out loud. Roger Mitchell directs this silliness in the usual Hollywood fashion. Morning Glory works despite this and delivers enough humour, romance, and heart to make watching this newscast worth it. My rating 7 out of 10. 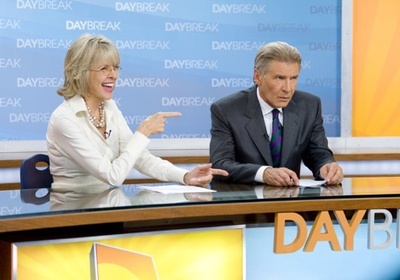 Catherine Hardwicke directs the latest version of Little Red Riding Hood’s journey to grandma’s house in this thriller. When Valerie’s (Amanda Seyfried) sister is killed by a werewolf, she starts to suspect something’s up with her rather odd family, in particular her gramdmother (a mis-cast Julie Christie who seems to forgotten everything about acting) who lives all alone out in the woods. The townsfolk are on the warpath to do-in the naughty werewolf led by the town’s priest, Solomon (the always good Gary Oldman). The story in its broadest sense is familiar and the manner of filming here is refreshing. Yet even with the twists along the way, Red Riding Hood ultimately fails to engage this viewer – blame Seyfried and Christie- and the ending involving relevations about Valierie’s dad, Cesaire (Billy Burke) leave little bite. My rating 4 out of 10.

When Dr. Martin Harris, a bio-technogolist from America (Liam Neeson) awakens from a coma after a traffic accident in Berlin, he discovers someone (Aiden Quinn) has taken on his identity. Not even his wife (January Jones) fesses up to knowing him. With the help of a cab driver named Gina (Diane Kruger) he begins to unravel the plot only to discover to his horror – and to the movie’s credit – he is actually a bad guy in Berlin to blow up an Arab bigwig (Mido Hamada) and a too-smart-for-his-own good professor who is about to save the world (Sebastien Koch). While entertaining, the unknowns in Unknown simply take too long to uncoil despite Jaume Collet-Serra’s ‘let’s-get-this-movie-ended’ directing style. While made watchable for the first 40-odd minutes of mystery and the appearance of of Frank Langella (as Harris’ US boss) midway through – Unknown ultimately uses too much umpf in getting to its point. My rating 5 out of 10.

2012
You probably heard the world is ending in 2012 but seems John Cusak and Amanda Peet missed the memo. And so, instead, we’re forced to watch them watch the world come a tumbling down a la the ancient Mayan – or was it Aztec – prophecy. Whatever. If you can suspend reality utterly and plant tongue firmly in cheek you may enjoy this noisy nonsense directed by Roland Emmerich. Made marginally bearable only thanks to the science of CGI, 2012 does make one think the world’s end can’t come soon enough. My rating 2 out of 10. 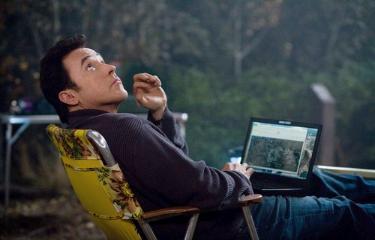 Battle Los AngelesIf you can move past the movie’s central premise and believe that anyone would actually want to save Los Angeles and/or if you’re the type of movie goer who loves the patriotic – if idiotic – silliness of Hollywood’s fascination for these US-Marines-battle-Aliens romps, you’re going to love Battle Los Angeles and Jonathan Liebesman’s direction. For the rest of us there is but a ever-so-thin plot driven by even thinner character development focused on one Sgt. Nantz (Aaron Eckhart). Battle Los Angeles is filmed in a Hurt Locker-style that – one supposes – adds grittiness and a real ‘I’m-there’ feel. Alas it doesn’t help and this reviewer spent its overly long runtime praying the Aliens would win. My rating 3 out of 10.

Steamboy
A beautifully filmed Japanese anime movie directed by master Katsuhiro Ohtomo. Steamboy, let us first say, is a gorgeous film to behold built sadly on a very light plot. In mid-19th century industrial England Rei, a young inventor, receives a gift from his grandfather Roid – a marvelous invention called the “Steam Ball” which can make any engine umpteen times more powerful. What ensues is a treatise on the good/bad of science as embodied in Rei’s father and grandfather married to the evils a monolithic corporation – the Ohara Foundation – can wrought.  bent on capitalization the ball for all its worth. It is a beauty to behold and a boredom to watch (the chase scenes aside). My rating 5 out of 10.

The Ramen Girl
The late Brittany Murphy stars as Abby, an American lost in translation in Tokyo after her boyfriend up and leaves for Osaka. Unwilling to head home, she undertakes the challenge of learning the art of preparing ramen from a gruff and stoid chef named Maezumi (Toshiyuki Nishida). Along the way she meets Toshi (Sohee Park), her new lover and comes to terms with herself while learning the ramen ropes. Directed by Robert Allan Ackerman somewhere between drama and comedy, the film – while very good and essential viewing for any ‘foodie’ – missed its mark as great by not holding firmly to one genre or the other. My rating 7out of 10. 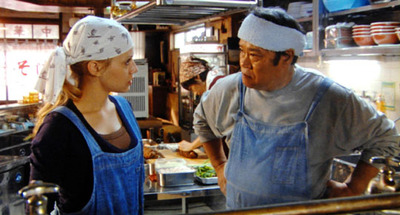 Harry Potter and the Deathly Hallows, Part 2
Finally the franchise ends … or does it? Doesn’t matter really, as David Yates tackles the most difficult gig in directorland and succeeds in giving the Potterites the conclusion they wanted and in step with the author’s vision. Harry Potter and the Deathly Hollows, Part 2 has Harry (Daniel Radcliffe) coming to terms with his history and his destiny as he faces evil Voldemort (Ralph Fiennes) … successfully. Like a perfect gift, this film is perfectly wrapped and tied with precision. So long Harry and farewell. My rating 8 out of 10. 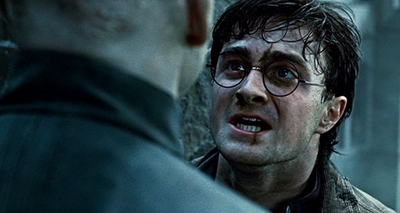 Sneakers
The first half of this movie is great – a real mystery unfolds and the ensemble cast including Robert Redford, Dan Aykroyd, Sidney Poitier, River Phoenix, David Strathairn and the beautiful Mary McDowell play perfectly off each other amid the action and comedy. Sadly when Gandhi, er, Ben Kingsely arrives halfway through the laces come undone as he unfolds a plot full anti-establishment angst. From this point on, Sneakers slows right down, and, like a novice marathon on the 18th mile, never really finds its soul (pardon the pun) again. Directed with aplomb by Phil Alden Robinson, Sneakers gets my rating of 7 out of 10. 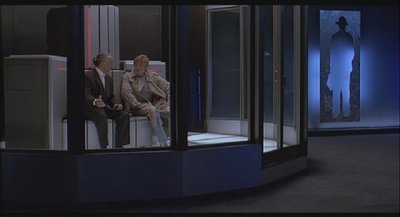 So I Married an Axe Murderer
Back in 1993, Thomas Schlamme directed a just-emerging-into-his-genre Mike Myers as down on his luck San Fransico beat poet, Charlie MacKenzie, who meets the butcher of his dreams, Harriett, (an excellent, over-the-top Nancy Travis). So I Married an Axe Murderer is a comedic thriller where paranoia reigns supreme. While decidedly shallow on many levels and a little slow through its middle, there is enough crass comedy layered amid a refreshing love story and gratious violence to make the utter silliness of it all, well, work. Not highbrow in the least and a great example of Myers doing the stuff that would make him millions later in the 90s, So I Married an Axe Murderer gets my rating of 6 out of 10. 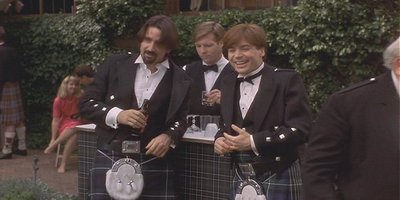