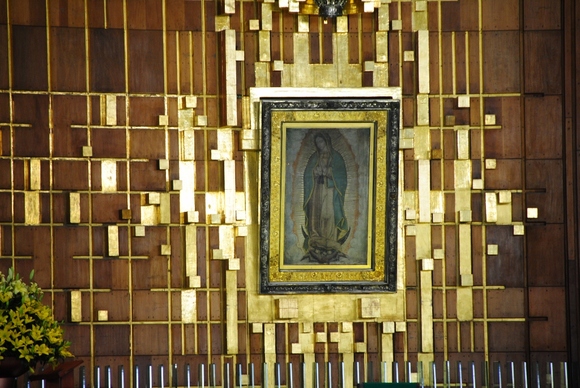 The Villa de Guadalupe (or The Basilica of Guadalupe) is one of the most visited Marian shrines in that most silly of cults we call Catholicism. To briefly recount the story, way back on December 9, 1531 the aboriginal Mexican, Juan Diego (Cuauhtlatoatzin) was wandering into Mexico City when he heard a voice calling him from atop Tepeyac hill. He climbed up to see an apparition of a young girl – who he believed was the Virgin Mary. Mary counseled him to tell the bishop of Mexico, Juan de Zumarraga, to build a church on the hill. Juan duly obliged and conveyed the message to the bishop. However the bishop was unmoved and basically called for the proverbial proof. When Juan returned to the hill and recounted this, Mary had Castilian roses appear (they are not native to Mexico). She had him collect them – and here’s the key part of this story – in his poncho and advised him to show them to no one but the bishop. Miraculously when he met with the bishop, the roses cascaded from the poncho and *gasp* an image of the Virgin Mary – the one you see above – had been impressed on his poncho. Tada, magic!

Course, the fact here is a little more sobering. Upon the Spanish conquest 1519-21, local Mexicans continued to adhere to the ‘old’ religion and worshipped the mother-goddess Tonantzin at Tepeyac hill. To say it was convenient that this site ten years later was suddenly home to Mary speaks volumes to the ingeniousness of Spaniards to circumvent one god and transform him into another. The Spaniards had obviously read their Alexander the Great and Constantine histories well and knew the power of a good conversion. ANYhow, this bit of skillful maneuvering aside, the dear bishop was hence a believer and thus started the construction of a shrine on the site that was replaced in 1622 with the original church, known as the Templo Expiatorio a Cristo Rey. That church is still there, though sinking and much suffered through 400 years of earthquakes.

The silliness of the silly religious crap aside, the Basilica is a magnet for Mexicans. Entire families visit the site regularly and will spend the day there picnicking, walking about, and presumably praying now and again. Mass occurs pretty much every hour of the day year round and entire villages arrange busloads of citizens who travel into Mexico City to make a pilgrimage. The site really is a quintessential part of the Mexican psyche and a foundation that links all Mexicans together. Today, its environs are a circus of religious paraphernalia stores (complete with rose-scented rosaries). It is utterly and totally worth a visit and if you can suspend the cultish aspect for a moment and see the site as a force for good – which on many levels, it truly is – you’ll enjoy an hour watching the power superstition has on people even in this day and age. It is also a stunning architectural gem. 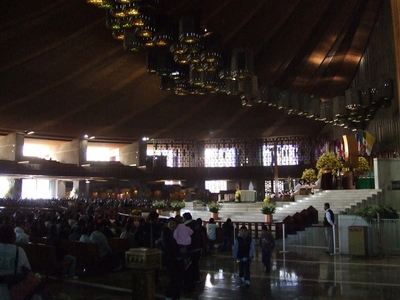 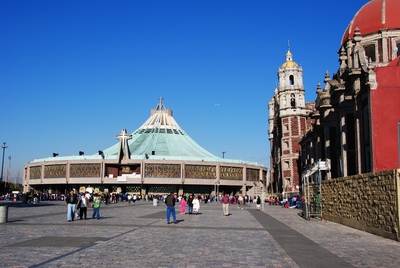 2) inside the modern basilica; 3) the original – and listing church in the foreground with the newer basilica in the background 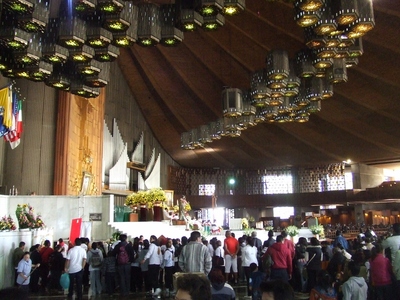 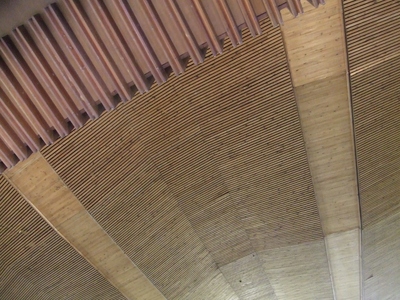 4) families attending the service, I thought the lamps were just outstanding; 5) the utterly gorgeous wooden roof of the new basilica 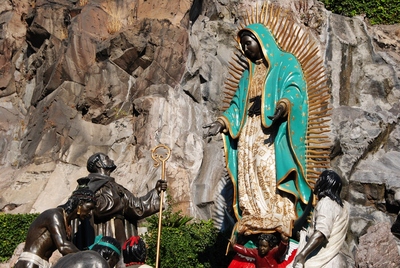 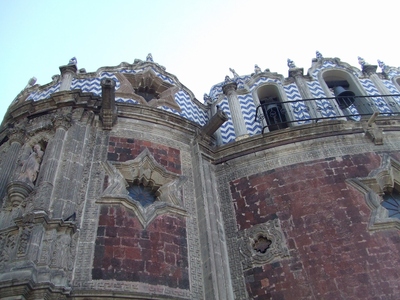 6) here is the bishop greeting Mary with Juan to her right, note that Mary is also black (another tip of the hat to the smart Spaniards); 7) Templo Expiatorio a Cristo Rey 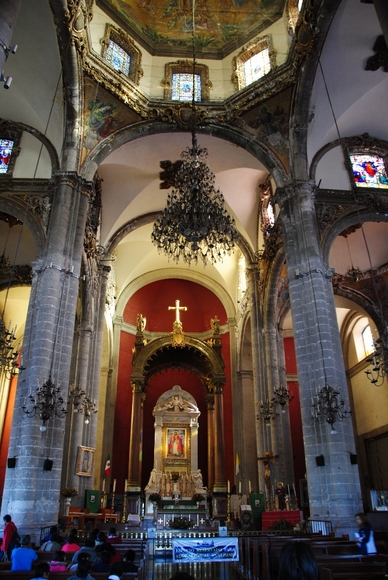 8) inside the Templo Expiatorio a Cristo Rey 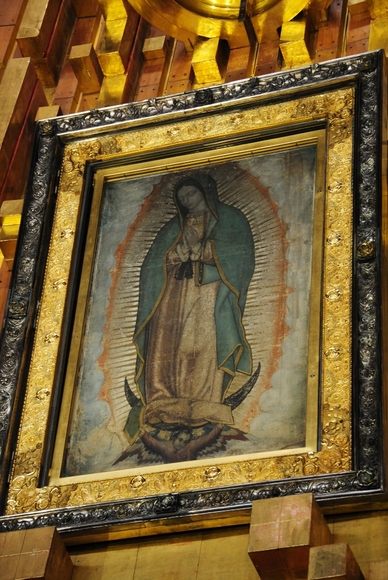 9) here is a close-up of Juan’s poncho with the image of Mary from 1531; you actually stand on a moving sidewalk beneath the poncho and are whisked past it