Posted on February 5, 2014 by appsscraps

1) moi with the ladies of the village

Before arriving in Kenya, I had enquired about making a visit to a traditional Maasai village that was off the tourist track to capture a sense of how local folks lived. I didn’t want to visit a ‘staged’ village set up for tourists where there were knickknacks to be bought.  I also wanted to make sure that any fee I might pay went to the villagers themselves not some third-party. The Encounter Mara agent I dealt with assured me he had such an experience available. For US$20 each, G and I would travel with a local Maasai (in our case, Senchura, our guide) to an authentic, working village. On the day before we left for Nairobi, Senchura drove us to the outskirts of the conservancy and into another time and place.

We crossed a seemingly endless dust bowl of a savannah, littered with holes and void of trees. We swept back and forth across a dried river bed looking for a ‘road’ only he knew that would take us to the village. We stopped a tractor and spoke with its driver who gestured this way then that. There was a nod and Senchura was off knowing exactly where to go. Ten minutes later a brown village of a dozen mud huts called enkaj – none taller than I – and built around a wooden-staked corral appeared on the horizon. We parked, exited the landrover and suddenly … the flies – millions of them – descended, like the flies of every Feed the Children television commercial you’ve seen. As quickly, a dozen children mostly in shorts & and shirts and shoeless, appeared looking inquisitive as children the world-over often are. Senchura guided us toward the corral and explained the village’s layout.

In this small community lived 3 families, each an extension of one gentleman. The Maasai are polygynous, and, assuming a man can care for each wife, the number of wives he may acquire could be unlimited (though in reality is often limited to three of four). The enkaj built closest to the entrance of the corral is the home of the first wife; huts then radiate out from there for subsequent wives (and their children). The sole role of a man in Maasai culture is to tend cattle.  In fact, the Maasai believe that a human who owned all the cattle on earth, and later became a god – called Enkai – sent the cattle down from the heavens to earth on a long bark rope. Women do all the remaining work – clean, milk the animals, care for the children, build the enkaji, prepare the food, gather wood, etc. Young boys live a carefree life without responsibilities until they enter adulthood through a rite of passage that occurs every 15 years or so.

Senchura explained that the cattle are taken out of the corral each morning and grazed by the men. During the day, the women tend their chores which does include building new enkaji (huts), an enkaj tends to last 4-5 years only. We crossed over to a enkaj where Senchura explained how the women build them. The structure is formed of timber poles driven into the ground and interwoven with a lattice of smaller branches. This is then plastered over with a mix of mud, sticks, grass, cow dung, human urine and ash. The cow dung is added to ensure the roof remains waterproofed.

As we turned, the women of the village had appeared dressed in all their finery. They were beautiful and arranged themselves in a line in front of the 1st wife’s enkaj. Senchura introduced us and explained that the women would perform three traditional welcoming songs, after which we could ask questions of one another and then tour one of the enkaji.

The songs were wonderful and we did get to join in (read: see me dance awkwardly). The ladies were clearly three generations and a couple of the younger ones were pregnant. We asked a few questions as did they (foremost on their minds: ‘are you married’). We then ducked down and entered the enkaj. Immediately entering it, directly in front of you is a smaller stable where young cattle and goats are kept at night. Turn left and you enter the ‘home’. There was an embered fire burning and one very tiny ‘window’ that allowed one beam of sunlight into the space. The home has a common area (read: livingroom/kitchen) and then two slightly raised antechambers – one for mom/pa; the other for the children. Interestingly, the flies that outside were incessant, were non-existent within the enkaj.

I remain honoured to have spent some time with these proud, joyful women. It proved again that which Africa is so good at delivering: perspective.

2) a rooster roams amid the village

4) a peek inside the corral

7) and here a new one is constructed

8) a close-up of the lattice-work on the roof

9) all that is left is its dung coating

11)  the ladies start their song

12) they are all dressed to the nines 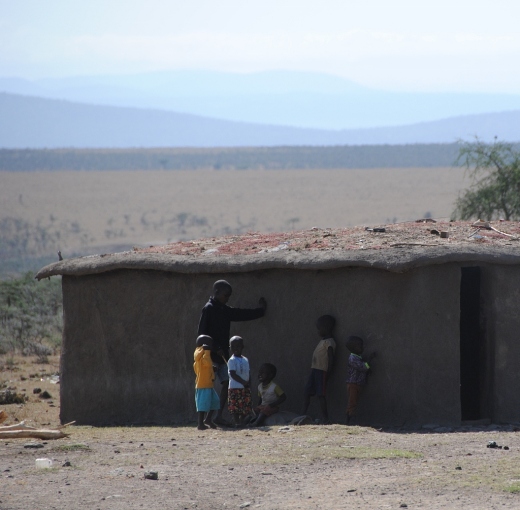 14) seeking cover from the sun

15) if you double-click this photo, you’ll get a real sense of the flies

G and I had bought and brought with us some supplies for the Koijaki Guiding School and we were fortunate to pay the students and it’s headmaster a visit, which was just an amazing experience. The school is set up to support local Maasai young men – and women – in becoming field guides. Tuition is covered through the kind donations of foreigners and all the students knew whom their sponsor was. We were introduced in the classroom and then each student diligently introduced themselves and where they were from (some had come from as far afield as Mombasa) and said a few works about their experience at the school so far. It was all very proper English in a British boarding school sort of fashion. The senior students then proceeded to give us a tour of their facilities and the laboratory and library. The young men we met, and the handful of women, are fine students and I know will make excellent guides. This school was also, in fact, the school that graduated our own superb guide, Senchura. 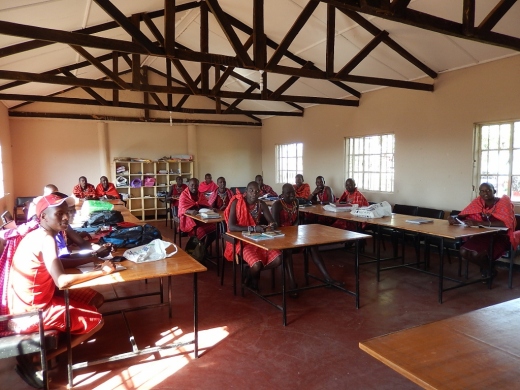 On our last day, Senchura drove us out to meet a trio of Maasai cattlemen as they worked. We exited the landrover and enjoyed a good conversation with them. I duly thanked them for providing Canada, and Alberta in particular, with its fine cattle and asked about how/when they decided to sell or butcher cattle, how they could roam the savannah and not have cattle picked off by the big cats in particular, and what the various branding on the cattle meant. We then walked along with them for a spell wandering amid the herd before heading our separate ways.

21) here are the cattlemen … one even had a cell phone!

Our last morning in camp was bitter-sweet. We had had an amazing time and had been blessed to see and do so much: we had seen the vast canopy of stars that fills the African nighttime sky; watched the sun set with drinks in hand; tracked lions across the savannah at night hearing them roar their location to each other; and seen so many animals. It was such a special time and I can only urge you – should you ever have the chance – make the time to visit the Mara. You will leave changed.

Senchura drove us back to the Ol Seki Airstrip and we awaited our plane to arrive and whisk us back to Nairobi and a reality that would now be subtlety changed because of our experience.

“If I know a song of Africa, of the giraffe and the African new moon lying on her back, of the plows in the fields and the sweaty faces of the coffee pickers, does Africa know a song of me? Will the air over the plain quiver with a color that I have had on, or the children invent a game in which my name is, or the full moon throw a shadow over the gravel of the drive that was like me, or will the eagles of the Ngong Hills look out for me?” 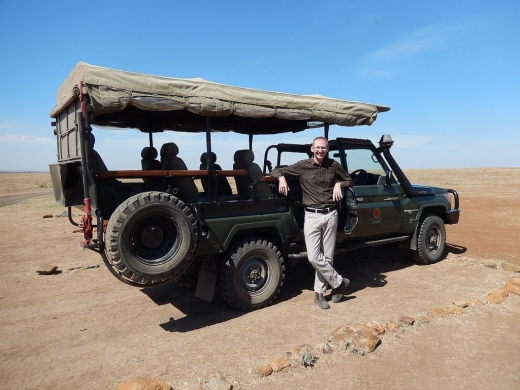 26) here’s the airstrip hanger if it is raining

27) and this bench is the airstrip’s waiting room 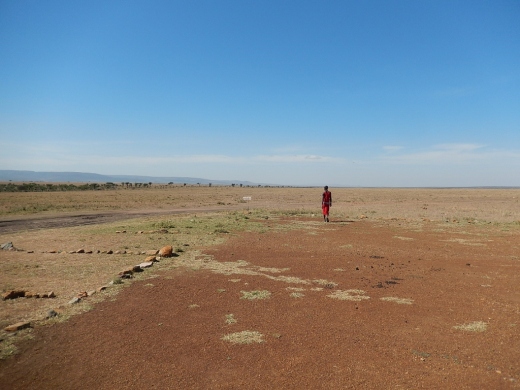 29) so long Senchura and thanks for the memories!