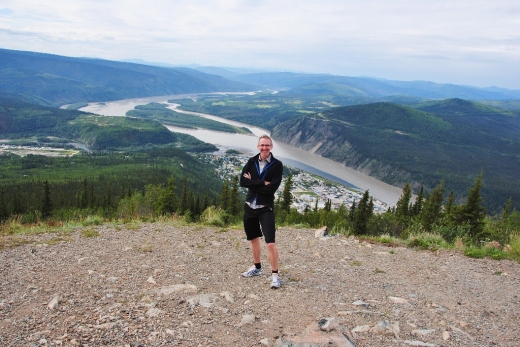 1) moi atop “The Dome” overlooking Dawson City and the Klondike River, where it all began

Dawson’s history is undeniable for sure and is wrought with all manner of characters, hucksters and dreamers. When Skookum Jim Mason and George Carmack discovered gold on August 16, 1896, Dawson was nothing more than a moose pasture and fishing camp used by the Tr’ondek Hwech’in aboriginal community. When news finally reached south a year later in July 1897 – thanks to a spectacular article in the Seattle Post-Intelligence newspaper – it set off the Klondike gold rush. It’s said that some 1 million people laid plans to head north, a hundred thousand actually set off, and roughly 30,000 managed to arrive on site. By then most of the claims had already been staked. The quaint vision we hold of rough and ready, independent, grizzled miners hand-mining riverbeds actually only lasted a mere 3 years. By 1899, the rich ground was exhausted and claims were consolidated into concessions which the federal government then gifted into the hands of large mining companies who employed steam shovels and those behemoths of the Klondike known as dredges to do the dirty work.

The drive from Whitehorse to Dawson will take 6 hours on Highway No. 2 (the North Klondike Highway) through the wee hamlets of Carmacks, Pelly Crossing and Stewart Crossing. 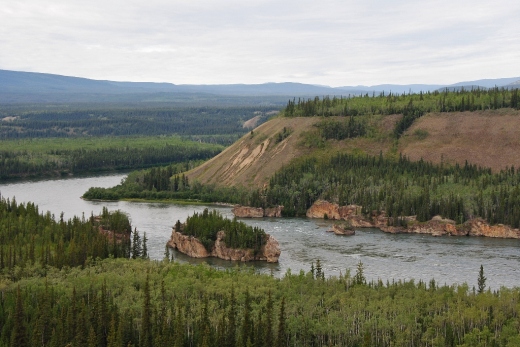 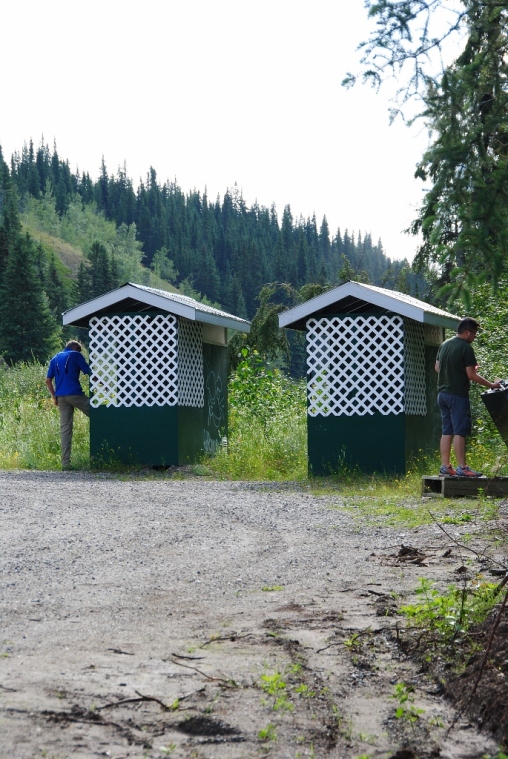 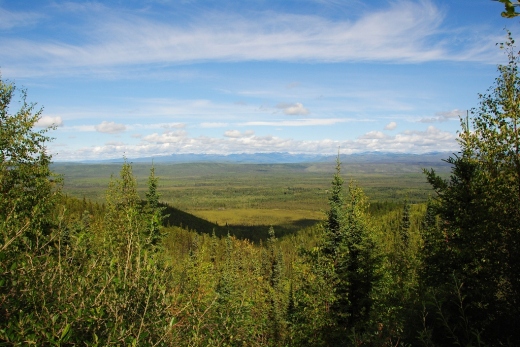 6) the Tintina Trench, a massive geological scar that crosses the Yukon can be best viewed just outside Dawson

7) Dawson City taken from atop “The Dome” 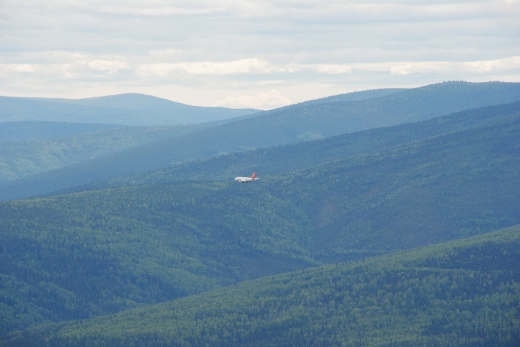 Dredges were particularly nasty machines when it came to the environment and operated in the Klondike area from September 1898 through till 1960. Dredges operated 24 hours a day, 200 days each year and essentially created their own ponds to float in, spewing out rock trails behind them. The tailing trails can be seen as you drive into Dawson and from atop The Dome.  About 13 kilometers outside of Dawson, down a very poor road, you can visit Dredge No. 4, now a Canadian National Historic Site. Well worth seeing one of the giants in person. 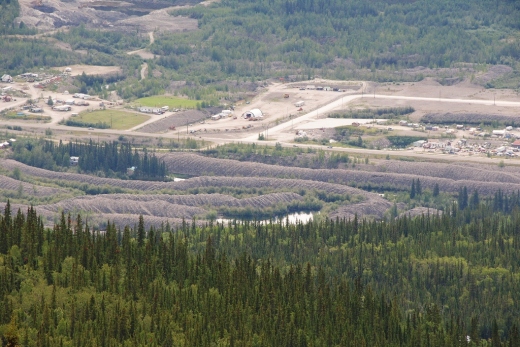 9) here you can see the trailings 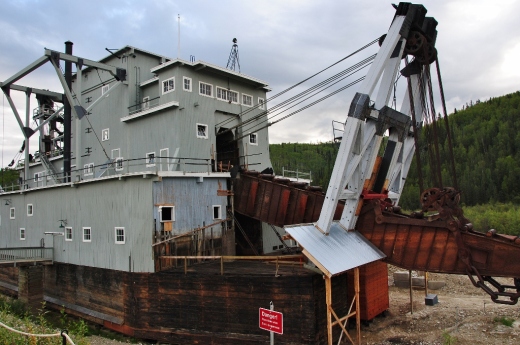 In Dawson on our way up to Inuvik we stayed at the Westmark Inn. Filled with many cruisetour clients (on route either south to Whitehorse and Skagway or west toward Anchorage); it provided decent accommodations for a couple nights and a good restaurant that served a simply delicious bison ragu.  We commented that Dawson is sort of surreal. It is a National Historic Site and as such, remains a snapshot of what it was in 1900 complete with dirt roads, board walks and quaint, if ramshackly buildings. There is not-a-one commercially branded anything within the city – no McDonalds, no Starbucks, no Tim Hortons, no Wal-mart (which is sort of nice). The locals seem to be suspended in time, and, of a fashion, take on characters from the Klondike days time such that you feel as though you are in a theme park albeit minus the rides.  I remain unsure whether I think that is good or bad. On the whole I enjoyed Dawson. Two days is plenty of time and I’m glad I made a point of visiting.

Dawson has a rather unique/strange/sick (take your pick) activity which was recently in the news. This event is held at the Downtown Hotel every night at 9:00PM under the dutiful watch of The Captain and involves a preserved human toe. You read that right, a preserved human toe. It’s real, I’ve seen it. To become a member of the Sourtoe Cocktail club you must order a drink of your choosing and then consume it … with the preserved human toe in your glass. To be a full member that toe must touch your lips when drinking said drink and The Captain is there to ensure this is adhered to. Seems the Downtown Hotel had, up till just recently, two toes. There was a fine of CAD$500 should you accidentally swallow the toe. Last year, that is – believe it or not – exactly what happened. A patron took up the challenge, dropped $500 on the table and promptly swallowed the toe. Yuck! One toe now remains but apparently the hotel receives many offers of donated toes. Yuck! The fine has since been increased to CAD$2,000 FYI. Whether or not we are now official members of the club shall remain secret as, much like Las Vegas, what happens in Dawson stays in Dawson. 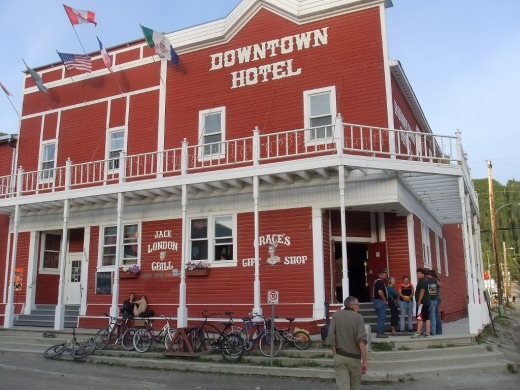 13) papa saunters across to the Downtown Hotel

15) the bar is rather dated

16) here is the trophy? to honour a past Captain of the Sourtoe Club 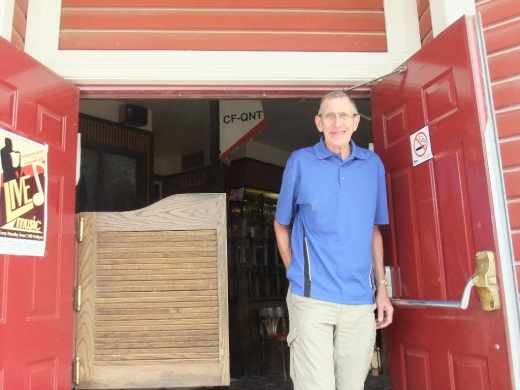 18) the Masonic Temple in Dawson 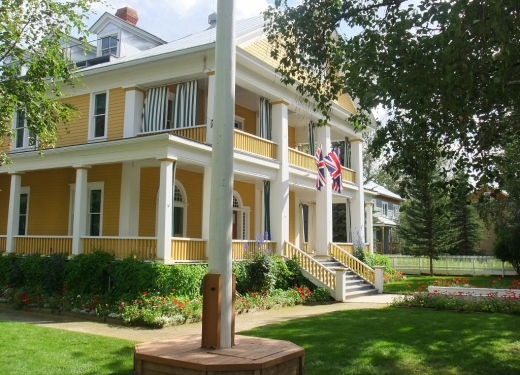 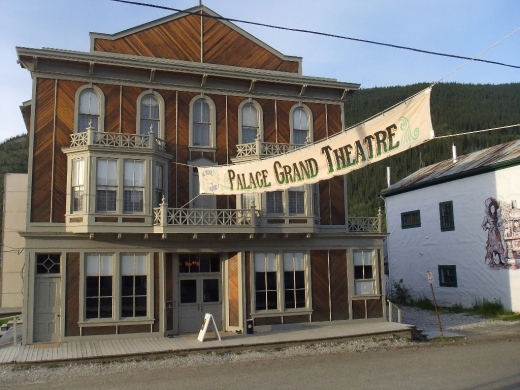 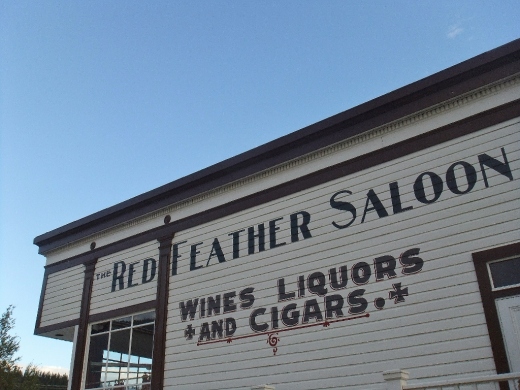 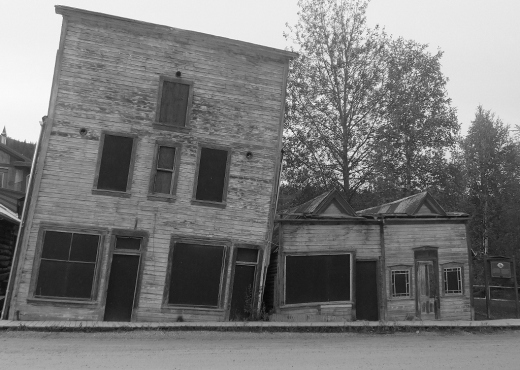 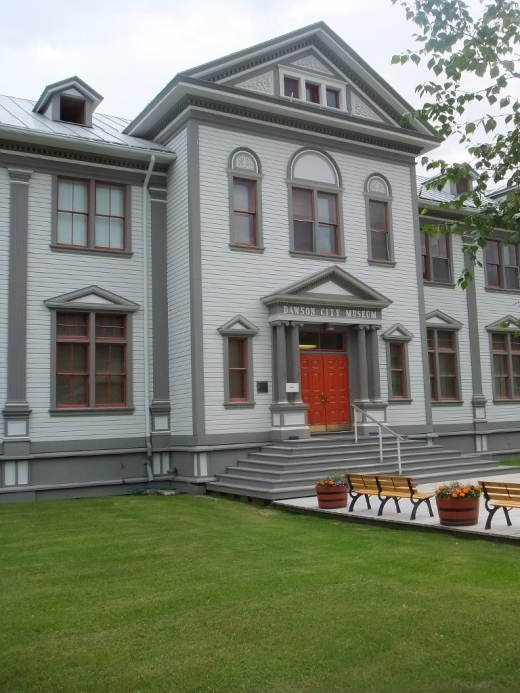 27) moi acting as the Premier in the legislature 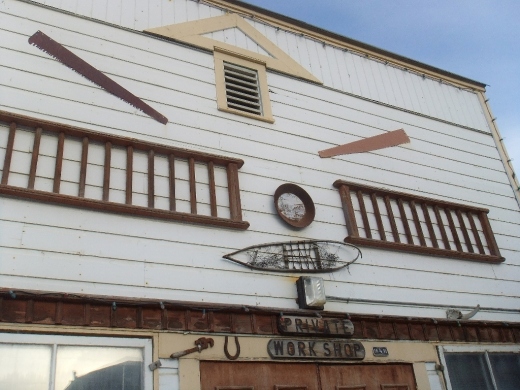 31) the SS Keno sternwheeler can be found in Dawson; this picture illustrates just how shallow a draft these ships took 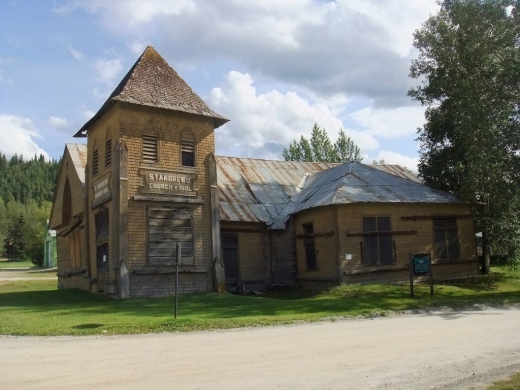 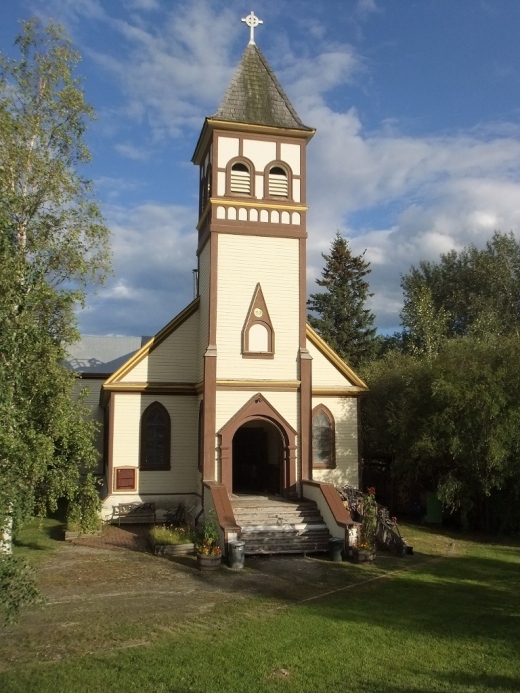 33) the newer version of that same church

34) the inside of the church 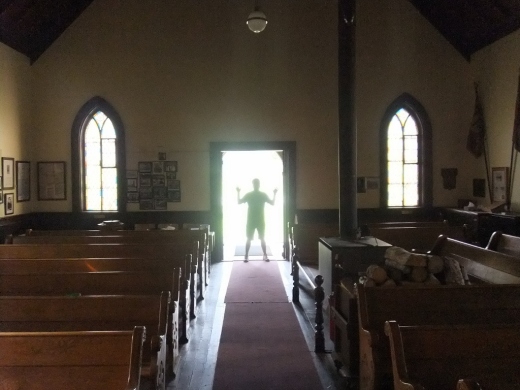 36) the quaint homes along the street across from the hotel

During the Klondike times, Dawson was famous for gold, of course, and great law and order thanks to the Northwest Mounted Police (the precursor to our Mounties). However, pull 30,000 mostly young men together and vices to take root designed primarily to separate not the boys from the men, but rather the boys and men from their dollars: prostitution, drinking and gambling.  Presumably all three still co-exist there, but in particular gambling and drinking have deep roots as evidenced by “Diamond Tooth Gurties“, a rollicking den of gambling and drinking which we did find ourselves in on a couple of occasions. 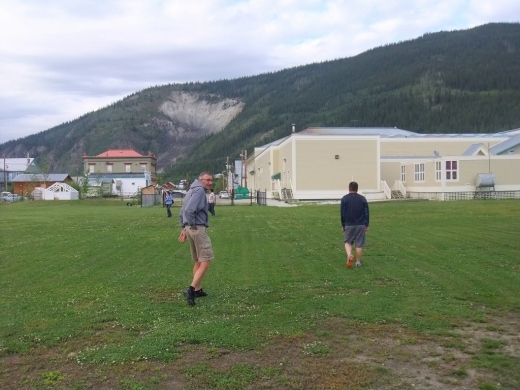 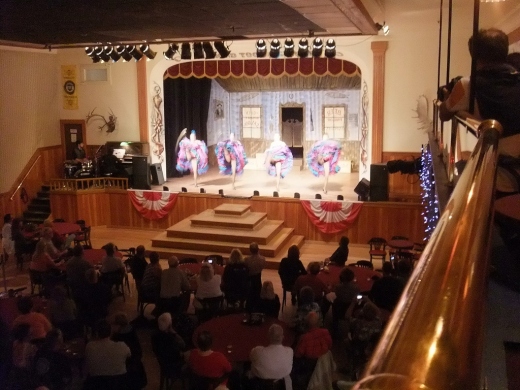 40) the girls are a’ dancing in the gambling den (you’d almost think you’re in Paris save the legions of white-haired cruisetour patrons!) 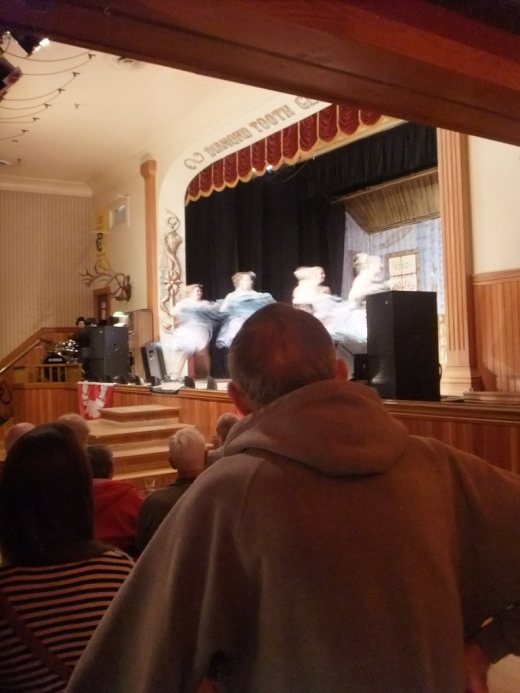 42) and seems to be enjoying it 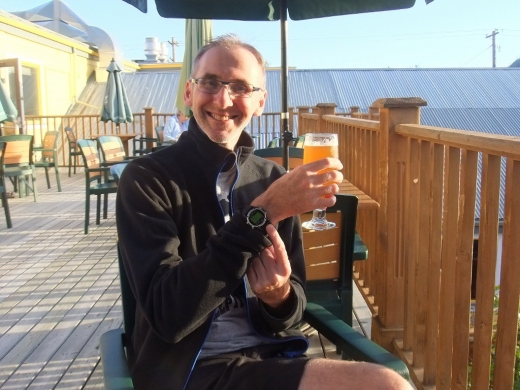 43) you’ll note a couple of things in this picture: a) I’m drinking a beer earned from my winnings at the roulette table at Diamond Tooth Gerties; b) I’m wearing shorts meaning it is still very warm in Dawson;

c) I’m pointing to my watch indicating we’re nearing 1030PM and the sun has yet to set this far north; and d) I need a shave 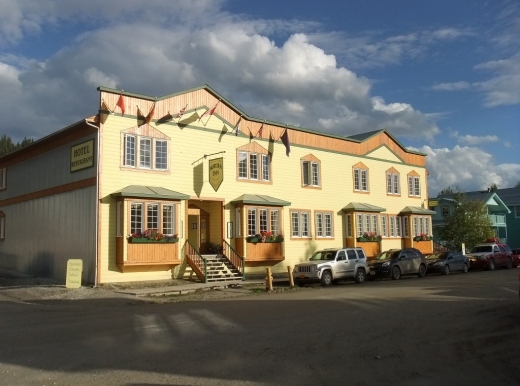 44) Aurora Inn, a delightfully small hotel where we stayed upon our return to Dawson after visiting Inuvik and Tuktoyaktuk