G and I met up with Kellie and Oyin, and meoni tonight for a drink at the Duke of York. This was our first time meeting meoni … yay meoni! Great to meet you mate!

Suitably watered, we then all headed off to a World Wide Short Film Festival screening at the at Isabel Bader Theatre. The screening started at midnight! hehehe Loved it!

Tonight’s shorts were all themed as “creepy” (cue: scary music). 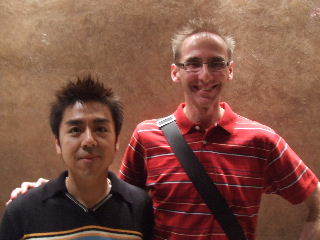 Killarat
Before it kills you. Part of the one-minute series “Mozart Minute”, a celebration of the composer’s 250th birthday. Seriously.
Rating: 1 out of 5. Lasted barely a minute so it was like … huh?

The Animal (Elukka)
A shepherd’s son and a pregnant sheep switch brains after a freak car accident. To make matters worse, all the lambs appear to have had a bite taken out of them, and Dad’s beginning to get a little hairy.
Rating: 4 out of 5. So strange; so neat.

Cherie
Art has a price. How far are you willing to go to find your muse?
Rating: 1 out of 5. Demonstrates why it’s so important to avoid falling in love with experimental, artsy film makers … they make BAD films.

Cutting Edge (Dernier cri)
Ever feel like you’ve been slapped in the face with your own bloody stump?
Smarts, doesn’t it; as the thief who makes a wrong move learns for himself in this clever film.
Rating: 4 out of 5. French production … fun and gory.

Day of John
John never wanted to be a hero. He never wanted demons summoned from the netherworld to invade his home either. Well, here we are.
Rating: 4 out of 5. York U produced and good fun.

Who I Am and What I Want
A bitterly unwanted outcast makes an unapologetic declaration of self. Heads will fly.
Rating: 5 out of 5. Great animation. A UK winner. Loved it!

My Everything
I remember the first time we met. The look in your eyes told me everything I needed to know.
Rating: 3 out of 5. Bad boyfriend, bad!

Monsters
From the director of “The Separation” comes a brooding and startling drama about sibling rivalry and runaway imaginations. Don’t worry honey, it’s all in your head.
Rating: 4 out of 5. Another UK winner. Probably the ‘scariest’ of the lot. Kid reminded me of Damian from Omen.

Those of you from Canada will know that the world’s 10th richest person, Ken Thomson, passed away on Monday. I was wandering through Mount Pleasant Cemetery this morning and discovered his grave site. He was buried yesterday afternoon. In keeping with the humbleness of this generous man, you’ll note how simple his gravesite is. May he rest in peace. 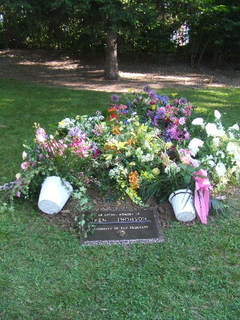 6 Responses to Midnight Mania with Meoni