Bamboo is big at the moment and I succumbed. 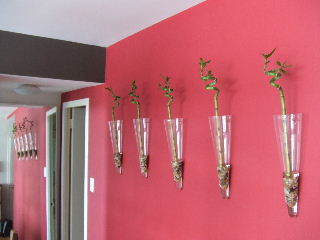 More on My GGG Grandpa

So, I wanted to share the story of my GGG Grandpa, Erasmus, and his adventure as we presently know it. 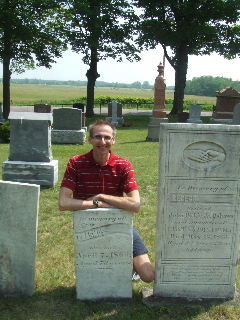 me and GGG Grandpa Erasmus

Erasmus was born in Quarndon, Derbyshire, England in 1793 and is one of my most important relatives as it was he who brought the ‘Smith’ name to Canada. NOTE: Erasmus’ last name was not ‘Smith’, I have purposely changed the family name so any stalkers out there are out of luck. If you are Canadian and have a ‘Smith’ name in your background you are descended from Erasmus.

In brief here is his story. Born in 1793 and baptized on July 13th, 1794 Erasmus grew up in a time and an area of  religious non-conformity. Unitarians, Congregationalists and Methodists were challenging the pomp and ceremony of the Church of England, Derby was the centre of this dissent and the ‘Smith’ families were definitely non-conformists. They were looking for a simpler way of worship and one more relevant to ordinary people.  In their religion, duty to their fellow man came ahead of duty to the trappings of a church. Erasmus was baptized as a Unitarian and the lessons learned about duty stayed with him throughout his life. 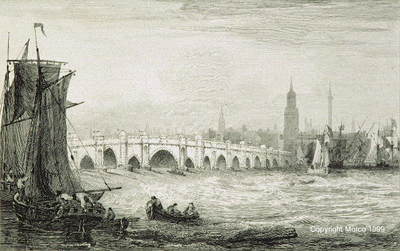 London and London Bridge c.1814 when GGG Grandpa Erasmus was picked up by a press gang
(source: thames.me.uk/s00050.htm)

He also grew up in a time of war. The Napoleonic Wars lasted from 1793 to 1816 and the young Erasmus never knew a time when England was not at war. He went to London at age twenty to seek a career as a clerk. The war intervened. On November 29th, 1814 his dreams vanished as he was picked up forcibly by a press gang and put aboard the Royal Navy ship “HMS Barbadoes”. The navy needed men and they got them by force. It was quite legal. One day Erasmus was a clerk the next day he was on the high seas bound for war in the islands of the Caribbean.

Life as a navy seaman was not pleasant but luckily Erasmus was one of a very few who could read and write and became the Captain’s clerk. The Barbadoes was a good fighting ship and won many battles. As clerk Erasmus was required to stand on deck during these battles recording casualties, shots fired, ammunition used and so on, all the while dodging cannonballs and fighting men. He survived, shared in the bounty of the captured ships and on May 15th, 1816 was discharged from the navy at Royal Harbour, Jamaica.

Erasmus found his way from Jamaica to Canada seeking a land grant that was to be available to war veterans. He lived in Montreal for a short time and then worked his way to what is present day Port Hope, Upper Canada, arriving there sometime in 1817.  He was eventually granted 50 acres of land in Smith Township. In Port Hope he worked as a clerk for a Charles Fothergill. Esq. a merchant of some means. In 1818 Erasmus opened a store in Port Hope and in 1819 was joined by his brother, Job. 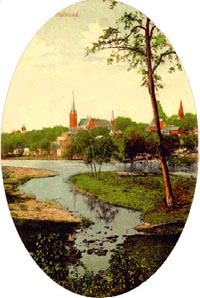 With the store established and his brother to run it, Erasmus returned to England to marry his childhood sweetheart, Mary (my GGG Grandma).  Mary was born on April 2, 1785 also in Derbyshire. Her family were squires of the Day Park estate near Quarndon and she lived there. The estate, just over the hills from Erasmus’ home was a meeting place for non-conformists. Many of the travelling Unitarian ministers stopped there for services and bible study and Erasmus and Mary probably met at these meetings. 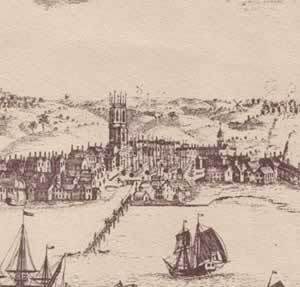 Erasmus and Mary were married in Liverpool in July 1820. Why there instead of Quarndon is unknown. Perhaps Mary ran off to Liverpool to meet Erasmus as he got off the boat from Canada. We will never know.  We do know that in July, 1820 almost immediately after their wedding they sailed for Canada.  They landed at Quebec City on Sept. 15th, 1820 and from there made their way by small ships and stage coaches to Port Hope. It would have been an arduous journey. Erasmus had been travelling for six months; Mary was seeing a strange and wild country for the first time, alone with a new husband and no family within thousands of miles. Winter was approaching and they still had to set up a home in what was basically a wilderness. True pioneers for sure!

For a time Erasmus was a brewer in Port Hope. A partnership is listed in an 1821 edition of the York Gazette, offering their brew to the public for $6 a barrel. Apparently Erasmus and Job and their partners ran a store, a distillery and the brewery in Port Hope until at least 1830. Erasmus also was an auctioneer, a commission merchant, and sold real estate. Both he and his brother became prominent in local affairs.

However Upper Canada was a very rough place in those days, and Port Hope particularly so. The local Minister of Parliament controlled the harbour and much other local business through his political connections and he used his employees to beat up and otherwise intimidate opponents, business competitors and Methodists. Erasmus fell into all these categories. On top of this Erasmus and Job were active in the “petitioning movement” which worked to try to peacefully remedy the abuses prevalent in business and politics. They wanted better education, lower taxes and more democratic rights and held public meetings to discuss these issues. As time went on their peaceful public meetings were broken up by increasingly violent action and it became too dangerous to hold such meetings. Voting, which was still completely public often resulted in beatings, even murder, and on at least one occasion Erasmus had to protect himself by brandishing his sword to assert his right to vote. 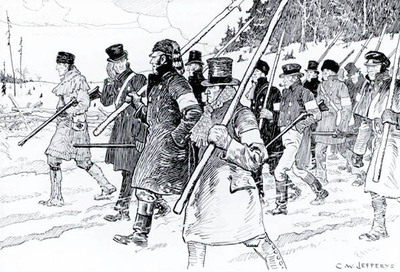 Both Erasmus and Job served in the Durham Branch of the militia. Erasmus as a Colonel and Job as a Captain.  Fortunately they were not called to action during the Upper Canada Rebellion of 1837 when William Lyon MacKenzie and other reformers tried to forcibly take over the Legislature. They opposed the armed rebellion but were fighting peacefully for the same causes. Times were difficult for reformers after the lost rebellion as the government brought in a” reign of terror” to clean out any opposition. Erasmus and Job left Port Hope, as did many of their reform minded friends.

They moved with their families to Bowmanville for a few years and then back to Port Hope. Erasmus’ sons were apprenticed, Thomas as a tanner, Erasmus Jr. as a cabinet maker, and Job as a clerk. My GGG Grandma, Mary, died in 1849 and Erasmus lived for a while with his son Erasmus Jr. in the village of Hampton. By 1861 he was living in the Oshawa area with his son Job and his family and it was there he died in 1866. It is said that in his later life he gave away any money he had and was remembered as being a kindly old man who carried candy for children in his pockets.

This patriarch of my family was a Liberal in both deeds and politics, and in religion he was at various times a Unitarian, Methodist and Congregationalist depending on what church was the most liberal and community minded. He died on April 7th, 1866.

8 Responses to Bamboo is Big