So lots of film festing on Friday, and a full weekend of dragon boating at Ontario Place with the Great White North Dragon Boat Challenge (more on that later).

On Friday, I saw three Toronto International Film Fest movies between lunching with G at the Unicorn.

Big Bang Love: Juvenile A
Taskashi Miike directed this strange film about a murder in a juvenile detention center. The story telling here is handled in a refreshing style and I did find myself caught up in the mystery. This film reminded me of Greyson’s Lilies in terms of the style of storytelling that unfolds. Miike’s casts a theatrical world of illusion, symbolism and metaphor. The key question being asked (and reinforced by the aztec temple and spaceship launch pad the youths view from the roof of the prison), when you die, where do you want to go, heaven or space?

Interestingly, the youth who ends up murdered, Jun, says: “Space; because there’s less people.” This film would translate so well to the stage or even as an opera (me thinks). It is stark and beautiful and will leave you going ‘hmmmmm’. I enjoyed it but suspect it would not be everyone’s cup of tea. My rating: 7 out of 10. 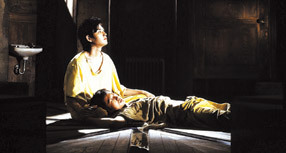 Yokohama Mary
A documentary that
traces the story of the (in)famous “Yokohama Mary”. A postwar
prostitute who ended up living on the streets of Yokohama and became
quite the celebrity to boot. Our virgin director here is Japan’s Takayuki Nakamura. You can tell this is his first film outing. Mary’s story is told through several “talking heads”, all of whom knew Mary at somepoint or other: her hairdresser, a chanson singer, a bordello owner, a photographer. And Mary’s story is interesting, yes. I just wish – (spoiler, take note) since she is still alive, we filmed everything from her perspective. Nakamura, I know, is keen to build the suspense and the story and uses the chanson-singer-dying-of-cancer to ignite the search for Mary (so s/he can perform for Mary one last time). It’s (yawn) all fine and well except we never really – despite the talking head testimonials – come to understand who Mary is and why she lived the life she did. A missed opportunity me thinks. My rating 4 out of 10. 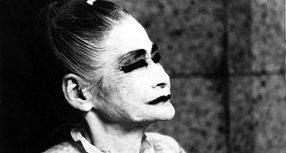 King and the Clown
South Korea’s Lee
Jun-ik directs this story of two clowns who’s appearance at the kingly
court ends up in plenty of laughs then plenty of murder as the
courtesans start feeling threatened by jesting that hits a little too
close to home. This film starts off very funny then turns dark and deep
in true Shakespearean fashion. It’s been done before, me thinks, but is still worth a view. My rating: 7 out of 10. 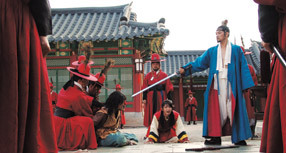 And today, after battling the waves at Ontario Place I hightailed it over to Paramount to catch:

The Host
Both the director, Bong Joon-ho, and producer were on site to introduce this film this afternoon. The crowd went quite wild when Bong Joon-ho mounted the stage and spoke. They had good reason to. This film works. Essentially, a good-old-fashioned monster movie with a genuine family drama tossed in. Gosh, (spoiler alert) even family members die in this romp. You wouldn’t get that in any Hollywood-made film. The monster is great, there’s a good dose of American-knocking (which always works for me!), good laughs that work despite the subtitles, and a one-on-one mano-e-mano confrontation at the end. Again, eprops to South Korea and its support of young film-makers. It is paying off. My rating: 8 out of 10. 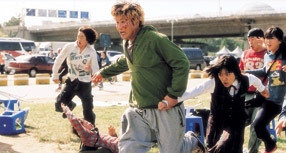