Borat: Cultural Learnings of America for Make Benefit Glorious Nation of Kazakhstan
So finally saw it. While it is thoroughly inappropriate on a myriad of levels – it’s discriminatory, homophobic, racist, to name but a few – I did laugh a lot so I suspect that’s saying something. The film follows Kazakh TV host, Borat, on his trip to America and its slide from a tour to discover its greatness into a hunt and seek for Pamela Anderson (who Borat falls in love with). Hardly a plot, I know. While I’m fully aware this is a satire, knowing so doesn’t make its crudeness and offensiveness any more palatable. Some have actually (and erroneously) labeled this ‘the funniest movie of all time’. It is not. My rating 5 out of 10. 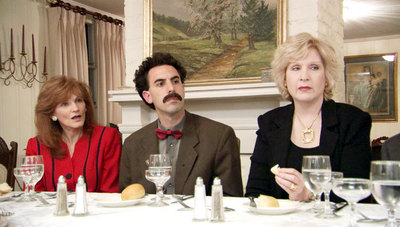 Carne Tremula (aka Live Flesh)
Directed by Pedro Almodóvar in 1997, Carne Tremula is a brilliant thriller based on Ruth Rendell’s mystery novel. This story starts off in a bus in the 60s with the birth of Victor, the young lad who becomes the center of the story. We find Victor, 20 years on, a pizza delivery lad with an obsession for the beautiful Elena, a lovely lass (who’s continually high). Elena, now off the drugs, wants nothing to do with Victor and their fighting draws two cops – David and Sancho. A struggle ensues and cop David is shot. So, there’s the set-up. Four years on, Victor is released from jail and continues his obsession with Elena, who now is now (connivently) married to David, now handicapped because of the gunshot wound four years previously.  A game ensues that brings David, Elena, Victor and Sancho (and Sancho’s wife) to a crossroad that reveals what really happened when they first met that fate day four years earlier. Almodóvar weaves a great, taunt tale here that is plausible and very real … we feel we know these characters as their story and lives are utterly convincing. Not for kids and with some full-on nudity, this is one to watch. My rating 8 out of 10. 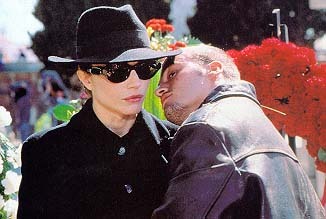