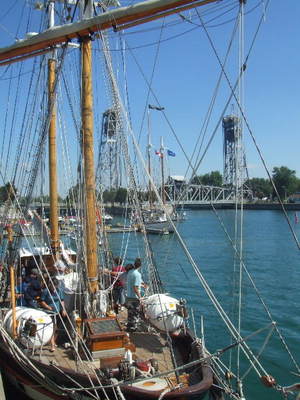 1) along the canal at Port Colbourne
After leaving Niagara Falls, G and I headed to Port Colbourne which is on Lake Erie. It’s actually the spot where the Welland Canal, which links Lake Ontario and Lake Erie, exits (or starts I guess if you’re coming from Lake Erie). I had never been to Port Colbourne, and, frankly I’ve no idea why I wanted to go ….

It’s a wee speck of a town and was in the midst of “Canal Days” when we arrived which gave the place a festive appearance with lots of little booths selling artisan wares set up along the shoreline. 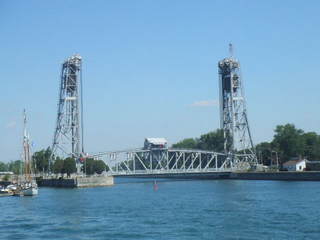 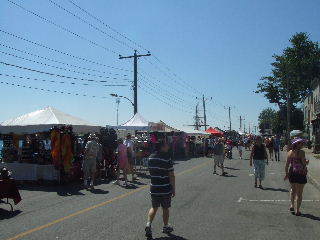 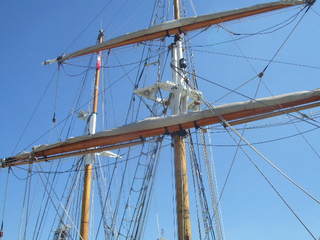 2) the lift bridge over the canal at Port Colbourne; 3) G wanders the artisan stalls at Canal Days; 4) tall ships in the harbour
From Port Colbourne we ventured another hour and 20 minutes east along the Lake Erie shoreline to Port Dover. Talk about a study in contrasts. Port Dover is not Port Colbourne. Port Dover reminds me of a place Roseanne and other trailer park trash families would venture. It has a lovely beach populated by tattooed, hairy men; saggy breasted, leather skinned cougars and young lasses who all look like Paris Hilton-wannabes (though with none of her class).

What actually makes Port Dover famous is its motorcycle gatherings. Yes, every Friday the 13th – literally – thousands of motorcycle enthusiasts descend on the town (with all that entails). Next year should be a banner year as there is only one Friday 13th (Friday, July 13, 2008) so that day in Port Dover should be quite the circus!

What we did find in Port Dover, however, was food. In particular, deep fried pickles! OMG delicious! And, of course, the required Lake Erie deep fried perch. The provincial government has issued warnings about consuming Great Lake fish, but I figure once a year is okay. 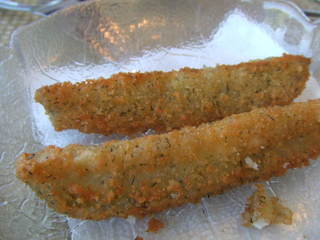 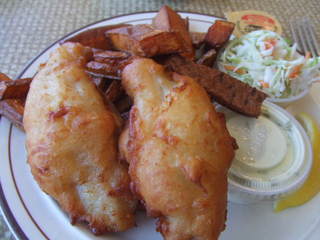