Posted on November 28, 2007 by appsscraps
Wet Team Dinner 2007
A long time ago, in a world far, far away, I used to coordinate and organize a WET Team. WET stood for Water Education Team and it was a group of summer student volunteers overseen by a committee of four councilors, myself and a director. This team spent the summer visiting local Toronto daycares, preschoolers and etc educating them on water safety issues. Believe it or not, that initial group of folks – or the organizing core at least – still meet to this day. And believe it or not, that initial group first got together in the summer of 1994 – yes, thirteen years ago. I think it is wonderful that we still meet once/year to get caught up on our lives and reminiscence back to when we were younger, funnier and poorer!

This year’s WET reunion was on Monday night (in the snow) at Fire & Ice up in Markham to accommodate Deb and Sindy who live up in those suburban wilds. Sadly, Coach Vince and Sindy were not able to join us this year.

Last year’s reunion was here at our place and, touch wood, next year’s shall be in our new condo. Woohoo! 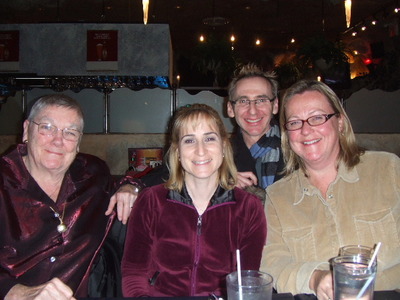 The Descent
Neil Marshall, who directed the excellent, cheeky horror, Dog Soldiers, takes a stab (pardon the pun) at a gaggle of gals who meet gruesome ghouls while spelunking … and doesn’t quite pull it off. Marshall kicks off the film with the death of lead character Sarah’s husband that is supposed to have us identify with her loss (it doesn’t) and provide the thread on which to construct the caving story that ensues (it does … though poorly). It also provides Sarah’s daughter, little Jessica, some reason to constantly appear (dreamlike) wearing a pretty dress and blowing out birthday cake candles (like huh?!). While you have to give prompts to Marshall for the filming here (there’s some great scenes in very tight corners), the ghouls when then finally arrive are just Nosferatu knockoffs. What floored me was Marshall’s decision to have Sarah turn vigilante at the end. (Spoiler alert) … the scene where Sarah hobbles Juno on suspicion she purposely stabbed Beth (or whoever it was … I was beyond caring) comes out of the blue and is, in a word, stupid. This film is an hour of tiresome plot building that ends with thirty minutes of thrills and is not worth the descent. My rating 4 out of 10. 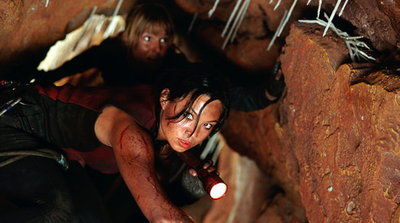