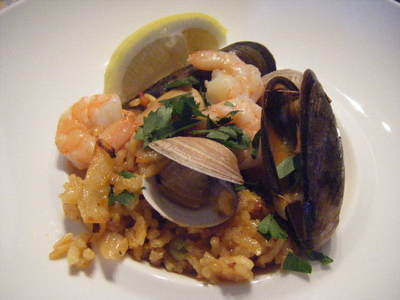 1) paella, inspired by the LCBO insert in this Saturday’s Toronto Star 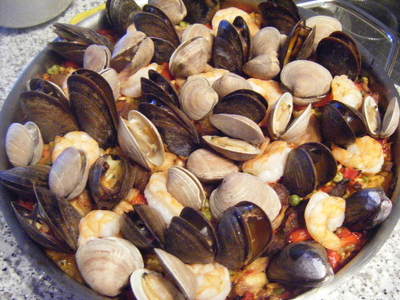 2) the paella just as it left the oven

I had the good fortune of making a very quick trip to London with Cousin Paul, Su-Ming and the boys this past week to make a special visit to Lady Kay. Travelling with twins that are so young is an adventure in itself but the boys’ parents were well prepared and the lads, angels for the long trip.

We made a pitstop at Riverside to regroup though sadly my folks were not there as they’ve been in the United States about a month now. From there it was on to see Lady Kay. Lady Kay is the matriarch of our family and my and Cousin Paul’s paternal grandmother. At 967, yes ninety-seven, she is still going strong and it was wonderful that her great-grandchildren had some time to spend with her. 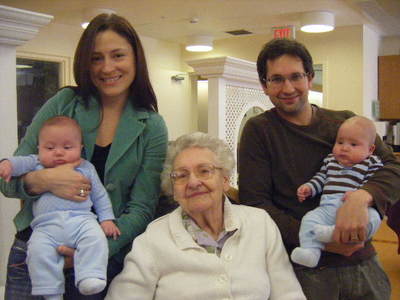 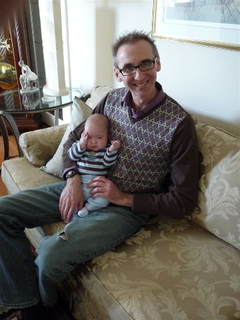 3) the lads, Su-Ming and Paul with Lady Kay at the retirement centre; 4) moi with Lukas at Riverside

Extras – Season 1 (Episodes 1-3)
Back in 2005 the BBC premiered this hilarious comedy based on the life of an out of work actor, Andy Millman (Ricky Gervais) who takes to doing movie ‘extra’ work for a living. The reality is Andy has a passion for acting but no talent for speaking. These first three wonderful episodes have Ben Stiller, British actor Ross Kemp, and the one and only Kate Winslet playing themselves (though way over the top). The comedy here is British and on the edge of taste at times but believable nonetheless as you can see ordinary folks making such gaffs. Well worth a rent, Extras gets my rating of 9 out of 10. 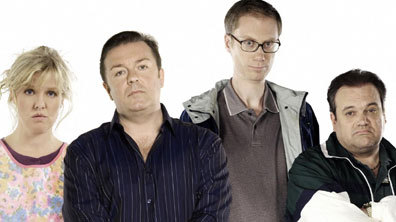 In Bruges
While the genre of a hitman charged by his boss of offing another hitman has been done previously, never has it been done with such gusto (by which I mean violence), oddness, and heart – yes heart – as director Martin McDonagh’s version, In Bruges. When the new-hitman-on-the-block, Ray (Colin Farrel in excellent form), ends up botching his first hit and murders not only his target, Father so-and-so, but also a young boy his boss Harry (Ralph Fiennes) sends him and his older, wiser, more experienced mentor-hitman, Ken (Brendan Gleeson) to Bruges, Belgium to recoup. But Harry’s just trying to be kind and show Ray a city he adores before ordering Ken to off the lad for killing a boy (hitmen have a code it seems and killing little boys is high on their ten commandment list of no-nos). What results when Ken defies his boss and lets Ray free is funny, tragic, honest and – gory violence aside – worth the ride. In Bruges is one of those oh-too-rare films that demonstrates what can result when the perfect cast, the perfect location and the perfect script come together: magnificent film-making with a message that goes deeper then its violence, and if you pardon the pun (if you’ve seen the movie) dwarfs all others in its class. My rating 9 out of 10. 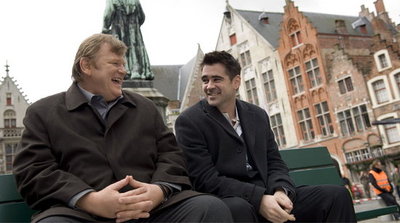 Control
Directed my music video director, Anton Corbijn, this biopic shot in beautiful black and white, recounts the rise of the post-punk band, Joy Division, and specifically on its lead singer, Ian Curtis (played with perfection by newcomer Sam Riley). As a major Joy Division groupie in my own day,  I was keen to see this film and watch the band’s rise from the obscurity that was Macclesfield, England to the eve of their first US concert tour when, sadly, Curtis committed suicide at age twenty-three. The film is based on Deborah Curtis’ (Ian’s wife) novel Touching from a Distance, which is an apt starting point for understanding Curtis who was genuinely odd and kind but who had lost control as his success mounted, his young daughter grew-up, his epilepsy worsened, and the guilt of his extramarital affair buried itself deeper and deeper. Control is a fair recounting of a young man, the music he left us, and the demons he fought, and ultimately loss his life to. My rating 8 out of 10. 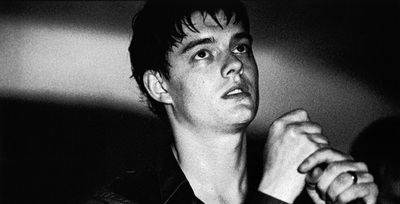