… and now, an intermission…

… and now,  while I make a brief sojourn down to Quebec City and Halifax for a few days, this intermission of movies I’ve watched of late.

Låt den rätte komma in (aka Let the Right One In)
The
young vampire genre is not new to filmmakers – witness Lostboys and
Interview with a Vampire, and most recently, Twilight – and the
trick is often not so much the function by its form. This Swedish
effort directed by Tomas Alfredson is a magnificent example of the
stark beauty that results when form trumps function. In its sparse
dialogue and chilly scenes of Blackeberg, a suburb of Stockholm,
Alfredson gives us a tome on loyalty, friendship, loneliness and
revenge. Most definitely, revenge. Based on John Ajvide Lindqvist’s
novel, Let the Right One In gives us the story of Oskar (Kåre
Hedebrant) a young misfit who is bullied at school who one day meets
Eli (Lina Leandersson), the forever 12-year-old vampire in his
tenement house playground. The two form a unique friendship and when
Eli’s mortal protector and benefactor, Hakan (Per Ragnar) is
discovered bleeding out a young lad for Eli’s sustenance, Oskar
steps into his role: the deal sealed by Eli’s dealings with Oskar’s
bullies. The title refers to vampire lore that suggests they must be
invited in before entering a house. With a high creepy factor that
has been perfectly polished, this film is well worth the risk of
inviting home. My rating 9 out of 10. 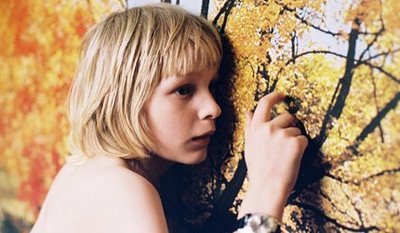 Wendy and Lucy
Kelly
Reichardt directs this take on Jonathan Raymond’s story, “Night
Choir” concerning a young lass, Wendy (Michelle Williams) and her
dog, Lucy. The duo are Alaska bound when their car dies in a wee
Oregon town. Out of luck and money, Wendy shoplifts some chow for
Lucy but is caught and hauled off to the police station leaving Lucy
tied up at the store’s entrance. (Predictably) When she finally
returns her dog is gone. Helped by a kindly security guard (Wally
Dalton) she opts to stay in town and search for Lucy while her car is
repaired … and that’s about it for story. This short but
seemingly very long 80-minute indie film was a big hit at most of the
film festivals, but did nothing for this reviewer. Quiet and
minimalist its central flaw in not giving Wendy enough time to show
the true depth of her relationship with Lucy (so we care to pay
attention) and its lame ending. Wendy and Lucy proves one can
appreciate the ‘art’ of a film while thoroughly disliking
everything about it. My rating 3 out of 10.

El Orfanato (aka The Orphanage)
Directed
by Juan Antonio Bayona, El Orfanato is a thrilling horror film built
in the vein of Henry James’ Turn of the Screw. Married couple Laura
(Belen Rueda) and Carlos (Fernando Cayo) take their adopted son,
Simon, (Roger Princep) back to the creepy mansion that served as an
orphanage when Laura was a little girl. The parents are keen to open
the mansion for children with disabilities. Simon starts seeing
invisible playmates throughout the mansion, in particular a hooded
boy called Tomas. At the opening day party Simon suddenly disappears
and the film then slides into the horror: a horror that is
exquisitely executed with intelligence and a richly detailed history
of the mansion’s former child residents and their creepy Nanny,
Benigna (Montserrat Carula). When Laura calls in the medium Aurora
(the always brilliant Geraldine Chaplin) to help in the search for
Simon, the film twists yet again into a treatise on what’s real and
unreal. Everything about El Orfanato works. The acting is superb and
the atmosphere Bayona creates will keep you scared, riveted and
entranced throughout. Highly recommended. My rating 9 out of 10.

War Dance
Written
and directed by Sean Fine and Andrea Nix, this fine documentary
recounts the oh-so-very-sad stories of three war children –
Dominic, Nancy and Rose – caught in the ongoing civil war in
Northern Uganda. The three are members of the Acholi tribe. The
Acholi are an internally displaced people in Northern Uganda who are
being systematically brutalized by a group known as the Lord’s
Resistance Army
(LRA) led by Joseph
Kony.
All three children have witnessed horrific events ranging from the
murder of their parents to, in Domenic’s case, killing innocent
farmers after being forcibly made a child solider. Living in a
refugee camp, what binds them together is their desire to compete
with their tiny school in Uganda’s National Music competition in
Kampala, and their quest to regain some semblance of their lost
childhoods. Sad, joyous, tragic and ultimately hopeful, War Dance
shares the story of these children with a beauty and dignity that
will leave you humbled. My rating 8 out of 10. 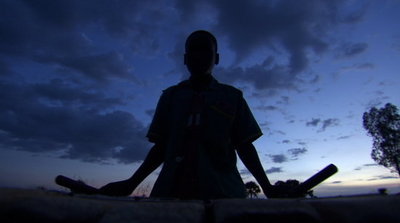 1 Response to … and now, an intermission…