That is the only way to do it. We left Amman on a Wednesday at 1120hrs and arrived in Nairobi the next day at 1445hrs. That is some 28 hours in transit; a ridiculous amount of time for sure but, sadly, our routing was not direct. We flew Amman-Istanbul-Cairo-Dubai-Nairobi (I’m exhausted just typing that again). Thankfully, it was not all that bad thanks to business class, and, in particular, the fabulous oasis of awesome calm that is the Emirates Business Class Lounge at Dubai International Airport.

The Queen Alia International Airport in Amman is architecturally stunning, designed by uber-architect, Sir Norman Foster, to look like Bedouin tents with superb airside services, restaurants, shops, etc. Our flight up from Amman to Istanbul was great. Royal Jordanian did a great job and have service down pat. Arrival at Istanbul Ataturk International was as crazy as usual (this was now my third time transiting through here so it was kind of old hat). The immigration line – and I use that word loosely as really it’s more a mob than a line – was bedlam with a recently landed flight from Azerbaijan and scores of oblivious passengers jumping cues everywhere much to G’s chagrin. He and an Italian woman did a great job putting things right in our wee section of this tide of humanity! Luggage arrived and we made it up to the departures level but were too early to check into our EgyptAir flight which was a real bummer as on the land side of Ataturk there is not a whole lot to do.  But by 1500hrs we had checked in and were happily awaiting our flight in the Turkish Airlines CIP Business Lounge, which was massive (and busy). 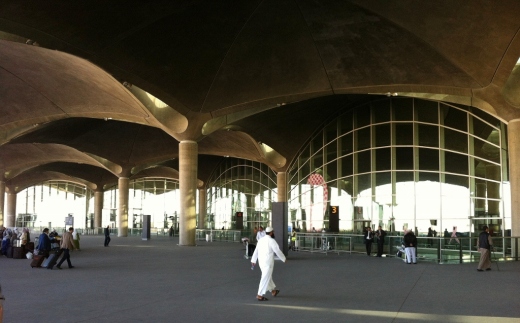 3) our plane for the journey back up to Istanbul

4) lunch on board Royal Jordanian 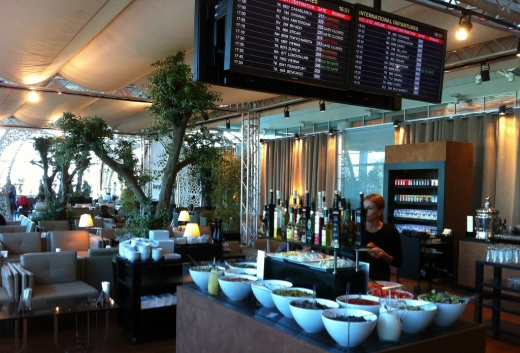 5) inside the Turkish Airlines Lounge, Istanbul 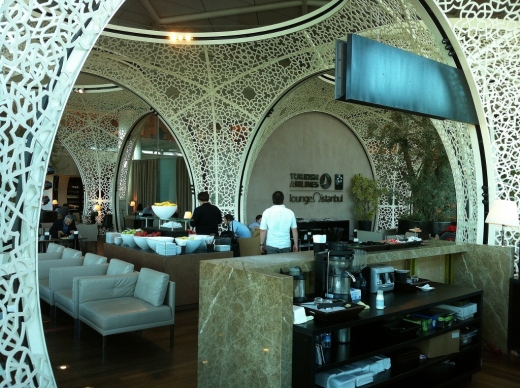 6) G goes hunting for champagne in the lounge

7) the Olive Bar inside the Turkish Airlines Lounge, Istanbul

Needless to say, I was a tad worried about the EgyptAir portion both because of the airline itself (more on that later) and because it would take us through Cairo International at a time when Egypt was (and sadly, still is) struggling with finding its legs post- a Muslim Brotherhood government. After EVA Air (whom we would fly with later in this same trip), EgyptAir is the newest partner to the Star Alliance family. To be honest I was not expecting anything good after reading online reviews but, on whole, I do have to admit EgyptAir was much (much) better than what I was expecting. So bully on them. They are certainly not at the level of the other Star Alliance players for sure, but perhaps membership in the club is a way to bring them up. I had read that flight attendants were surly and indifferent and invisible but the crews we had on our flights (the Cairo-Dubai flight, in particular) were attentive, pleasant and available as needed.  The cabin outfit – not surprisingly – was much better on the 2nd flight down to Dubai than on the flight from Istanbul-Cairo. Food was fine (insomuch as ‘fine’ says anything really) and there is no alcoholic service on board. Arrival in Cairo was uneventful and as we were in transit, no immigration adventures were needed. We explored the airport waiting for our flight to Dubai which was departing at 2230hrs. It could best be described as, hmmmm, tired. We visited the EgyptAir Business Class Lounge of course. It was smallish with limited food selection (but I grant you it was later at night),  no alcohol of course but there was wifi and a good selection of beverages, reading material (in English) and some televisions. I do though remember feeling cold the whole time I was sitting there which I thought odd for being in Cairo?! 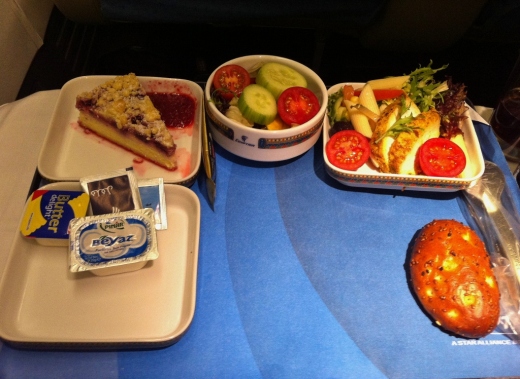 We landed at Dubai International shortly before 0400hrs on Thursday. After Cairo (and this is said with kindness, honestly) it was like we had gone to sleep in the stone age and awoke in the 22nd century. Dubai International is everything Cairo International is not – smart, fresh, light, clean, architecturally stunning. Cues at Dubai for immigration were looong but here things are much better organized with long narrow corrals that lead you to – interestingly so – an all male contingent of Emirati immigration officers. These gentlemen were all dressed in dishdashes (kandura, in Arabic); the long white robes we often come to associate with the Arabian peninsula, white guthras (the headscarves) and capped with black egals (the rope that keeps the guthra in place).  At Dubai it was not volume of passengers in the immigration hall that caused such slowness but the officers themselves. My perception – and I note this is a perception only – as I stood in line was that these gentleman spent a full 50% of their time stroking their own egos. Sour-faced and sombre and with no words, they would every so begrudgingly motion a passenger forward, peruse their passports page by painstaking page, sit motionless staring at their screens for minutes, gesture for passengers to move in front of cameras, and pause – immigration stamp in hand – for moments again before issuing the visa. They did all this to demonstrate their importance and superiority and to make the point, I’m in charge. All very middle eastern and hypermasculine as would be expected.

Eventually we were issued our visas. We collected our luggage and transferred over to Terminal 3 to await our flight to Nairobi.  And, oh, what a wait indeed. We enconsuced ourselves in the Emirates CIP Business Lounge where I made a beeline for the showers. Freshly showered I fetched two glasses of champagne from one of the dozen bars in the lounge and we toasted a return (of sorts) to civilization … albeit at 0600hrs. Heaven.

The Emirates Lounge is custom-built, as is the Emirates Terminal 3, and sits above the entire length of the airport terminal. It is unique of any business class lounge I’ve visited in that when you depart you show your boarding pass at a ‘gate’ which is actually inside the business lounge before taking a dedicated elevator down one floor to – essentially – the door of your plane. Awesomeness itself. G and I have had a discussion of which is better – the Emirates CIP Lounge; the ANA Lounge Narita;  the SilverKris Lounge Changi; or the SilverKris Lounge Hong Kong (my thoughts on those last three are here). It is a very tough call that, but in the end, I would tip my hat to SilverKris Changi.

Our flight to Nairobi departed at 1045hrs aboard a beautiful Airbus A340-500. Service was outstanding in business class and the food, exceptional, and we again began comparing. Which is better, Singapore Airlines or Emirates? This is a tough question but our hats would tip to Singapore Airlines. We would fly later in this trip with Singapore Airlines from Dubai to Singapore and onward to Taipei and feel the level of service is both more personalized, attentive, and genuine than that of Emirates. Though, don’t get me wrong, you cannot go wrong with either of these simply magnificent companies. 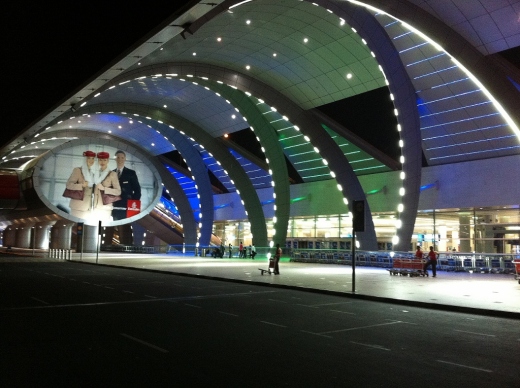 14) my shower room inside the Emirates Lounge 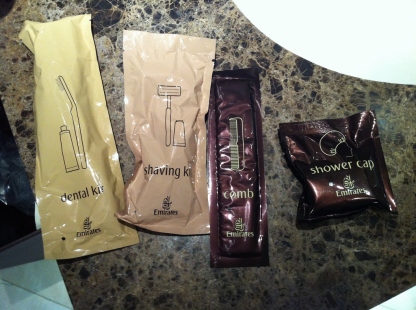 16) nothing like a shower after a long day/night and a glass of champers at 0600! 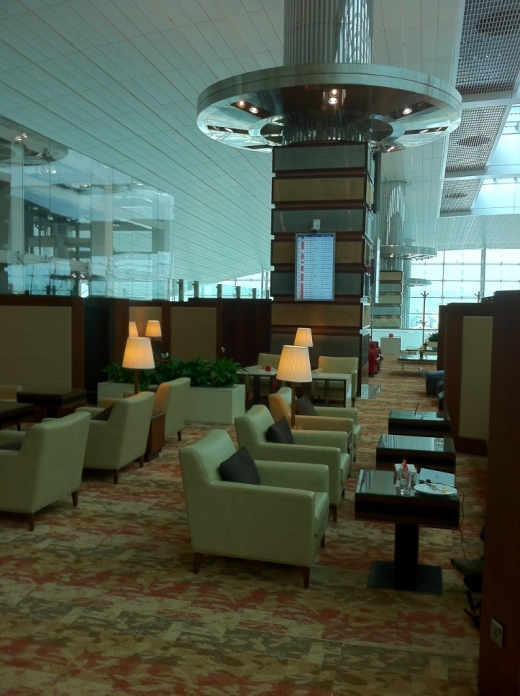 17) the ‘waiting area’ for your ‘gate’ inside the Emirates lounge 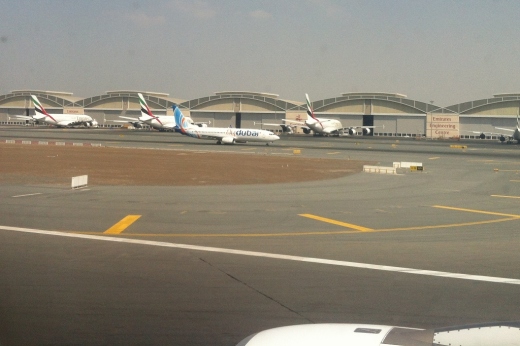 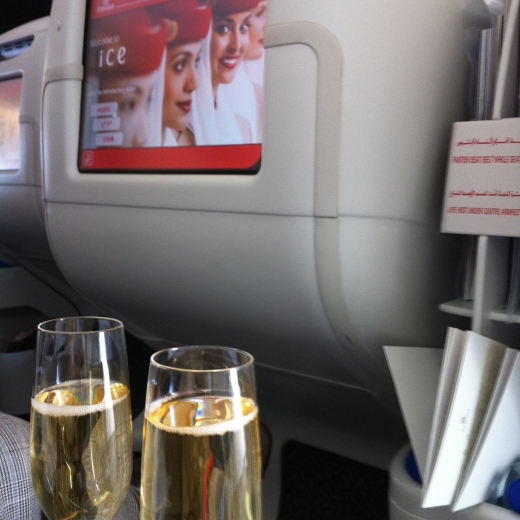 19) champagne toasts to Nairobi on board 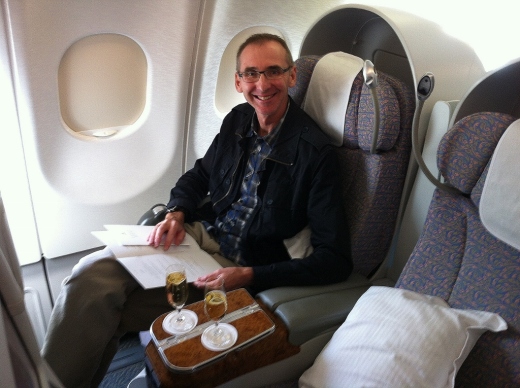 20) moi deciding what to order 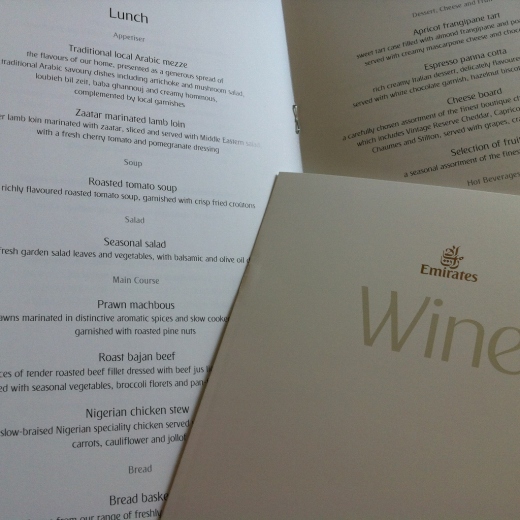 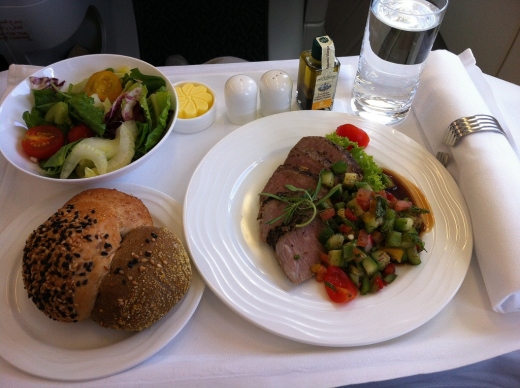 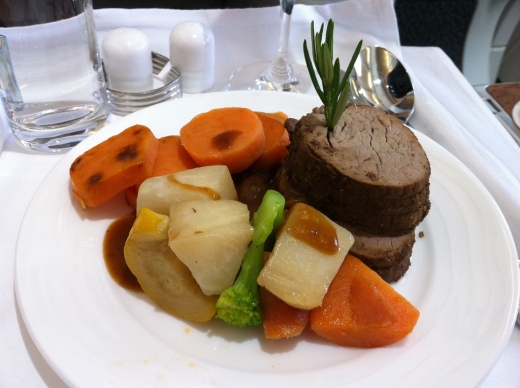 25) there’s cheese of course before dessert

26) and then dessert arrives